Well, first of all, we must acknowledge the Opes, and her amazing toy holding. Horray for Opal!  On July 26th, I realized, this girl is growing very fast, she can probably play with stuff now. So, we got out the little baby toys, gave her one and "voila" she holds a toy - another first for the amazing growing girl! 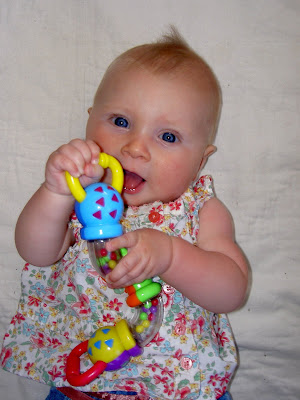 Also on the 26th, Eben said goodbye to his training wheels! But sadly, I had no camera to prove it. Actually, and this is horrible for a mother to admit, but, I didn't think he could do it! I thought "Sure, it'll be great to get him out there and feel the bike without his side supports and Peter will just hold on to him the whole time." And then, Peter let go... and he was still riding... by himself! Then he ran right into me and I caught his handlebars. We're still working on starting and stopping, but he's got the in between down.  Now, I know some kids start riding their bikes at age 2 - but hey we're really proud of our 4 (almost 5) year old. Way to go Eben! 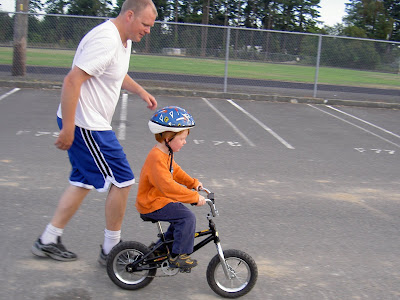 Eben on July 28th. I brought my camera! 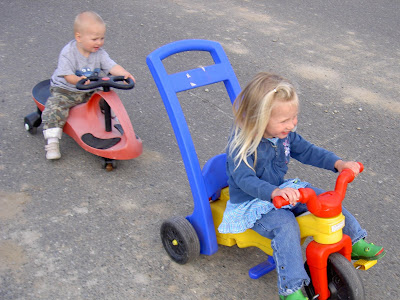 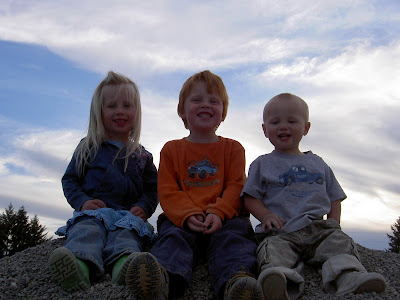 We rode around Lakes H.S. where they are doing construction projects.
So we played on the gravel hills 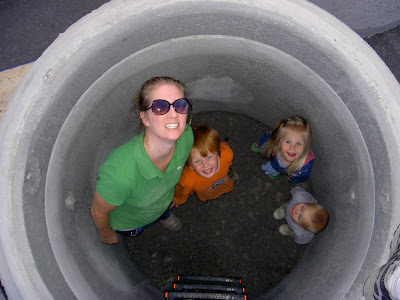 and played in the manholes before they went in the ground.

And now, the riding proof! Drum roll please..... (now you have to push play on the video)

For those of you who watch the video to the end, I'd like to thank my wife-I have long felt that my rear has been grossly underrepresented in our blog. The final shot more than makes up for all the previously missing booty shots.

HA HA HA! I appreciate your candidness Amber. It's ok, we won't tell Eben. I'm impressed that your kids actually touch the pedals on their bikes. Coop is 3 and the stinker REFUSES BOLDLY to use his pedals. He insists that it is better to just push his bike with his feet on the ground...whatever dude. Peter...do you guys have like a bike-riding class for boys I could enroll Coop in? Maybe hanging with your kids could give the kid just enough peer pressure to put those toes on the pedals. What do you say?

Good job Eben! Even though Hayden has been doing riding without training wheels for a few months now, Hunter did it at the same time and he was 6! So Eben at 4 is great!