On Sunday, after Peter and I had our morning devotions, we got a call from Stacey Wiley, a friend and Lakewood officer's wife, asking if Peter was working. I told her no that he had gotten it off and was right here. She said, "Well that's good, now we know it's not him." She said that four officers had just been shot at a coffee shop. She might have said "killed", but I only heard "shot". I assumed all would be well. They are officers. They have protective gear. They have guns. They've had training. They would be at the hospital. They would be fine.
We also assumed it was Tacoma officers, because it had happened in Tacoma. I've never seen Peter put on his uniform and get out the door so fast. Peter told me who had been murdered before I left for church. While I was at church, I realized that Tina had taken Peter's place at work that day. That was amazing and crazy and weird and horrible and wonderful.
This used to be Peter's squad. Tina and Peter had worked closely together when they did schools. She had given us her son, Marcus' clothes and toys for our boys. Eben wore Marcus' jacket to church that day. Peter met up with Greg weekly for coffee. He liked being with him because he was more than a cop. He was a great dad and hubby. He was real. He was a fun person. He was relatable. They shared stories about their families and life, not just cop talk. Mark had been to 4th of July and helped Peter put our dock in the lake. And Peter had bugged Ronnie non stop to come to basketball - a sport he loved. But taking his daughter to school was the highlight of his day and always came first. These "four officers" were his friends.
I'll never know just how affected Peter was by this. We didn't really see him for the next two weeks, except for family events we had already planned. He didn't eat during the day and after I fell asleep at night he would leave and go to the police station. He said he and all the other officers would just walk around like zombies. He said he felt "white, like nothing".
A lot of appreciated concerned calls came in that day and the week following, before the names were released and after. And though Peter didn't feel like talking or responding to anyone, the prayers and kind words were and are very helpful. Just knowing that our friends and family are there to support us, although we feel very minute in this whole ordeal, is a great comfort. 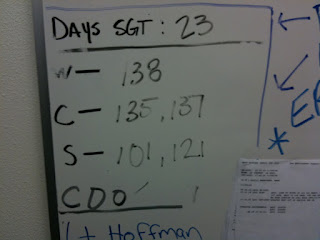 This is the board at the station that shows who's working. This is Nov. 29th's schedule. I know it doesn't look like much, but Peter wanted to remember seeing their numbers on the board.
Posted by The Johnsons at 9:28 AM

This was such a horrible thing and it hurts to know Peter was so close to these officers. We will continue to pray for Peter because we know the healing process is slow, unreliable, and hard. We love you guys and are honored to be your friends!

"The Lord is close to the brokenhearted and saves those who are crushed in spirit. A righteous man may have many troubles,but the Lord delivers him from them all; he protects all his bones, not one of them will be broken--Psalm 34:18-20

Praying for Peter, you, and for all the hurting families. I'm so sorry Amber...this is heartbreaking.
Love, hugs, and prayers,
Debi

As I have mentioned before, I have been praying for your family. If you need anything please let me know.

Thank you for sharing this painful memory.

Words seem inadequate in times like these. Truly only God can heal hurt that is this deep.

Peter, we love you. Love, Nonnie