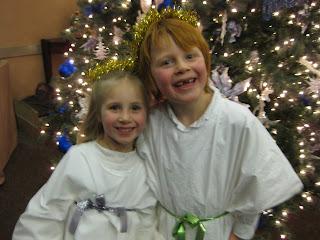 This year Eben and Kivi both decided they wanted to be in the Christmas pageant that Lake City puts on. They were so nervous, but they went to the try outs and all the rehearsals that the big kids went to and Miss Nikki was so sweet to give them both parts they wanted. Eben wanted a solo and Kivi wanted a little speaking part and to be a dancer. I didn't realize until I saw them up there on stage how tiny they looked. Kivi was the only kindergartener with a part (She handed a scroll to the angel Michael and said, very loudly and with great enthusiasm, "Michael, I have an announcement for you!" - it was so cute everyone clapped and cheered for her all three performances.) - so she felt super special and Eben gained so much confidence from singing his solo in front of everyone. It was such a great opportunity for them both. And Peter and I didn't know how much joy we would recieve from seeing our kids singing and dancing and telling everyone about the Good News of Christ's birth from the stage.