Pre Passover and a Fast

This year our church invited Alan Shore with Chosen People Ministries to lead our Saturday night service in the Seder and Passover meal. It sounded like a whole lot less work and fun time to celebrate the Passover with our congregation. So we told the kids we would be having Passover at the church on Saturday the day before Palm Sunday. I didn't anticipate a couple of things. Our kids had really come to love our tradition of having Passover and Eben especially didn't handle the change very well. Also, it ended up to be a very adult version of the Seder, meaning our kids needed to be very quiet, instead of the kid-like atmosphere we have at home. It was very educational, but not geared toward the younger crowd. And we brought everyone, unlike almost all other families who put their babies in the nursery. I wanted to be all together as a family like we had always been during Passover. Thankfully, Beckie held Pella so we could deal with the very food anxious Berg and the other five. (We were watching our good friend Reagan that weekend.) This is what most of the time looked like: 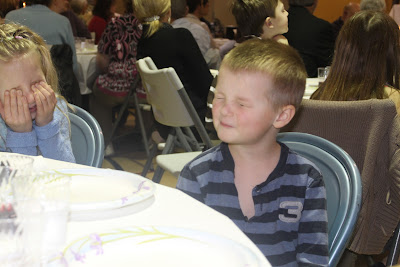 All of the kids were trying so hard to be quiet and keep their eyes closed during the many prayer times. 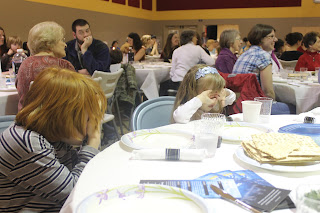 At one point, Eben looked over at me and said, "I feel like I'm going to throw up." I got a tupperware under him just in time for him to puke during one of the prayers and ushered him out while he continued to spew while walking through the tables to the bathroom. 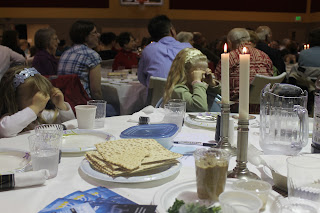 Thankfully no one else got sick. Well, except Dada. He was sick but only of juice. 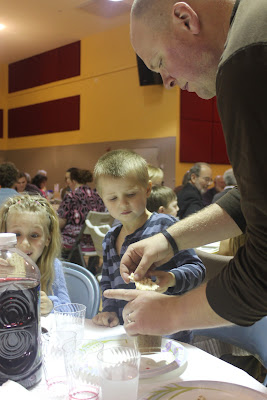 Peter was on his 6th day of his 10-day juice fast, thanks to a bet we made just after watching the movie "Sick, Fat and Nearly Dead" on Netflix the day before we started the fast. I lost the bet after 3/4ths of a day. Although, I was pretty sure I'd lose anyway and really didn't think Peter could do it. Actually, all the research I found said that pregnant and nursing women shouldn't do a juice fast at all, so c'est la vie. But Peter was amazing, and since we didn't buy a juicer, or find one to borrow (He said he'd only do it if no one knew he was doing it, which turned out to be a much harder secret to keep than he thought.), he drank only Odawalla juice and V8 (because he started to go insane on only sweet juice). Such willpower! And some things that were bothering him cleared up too - coincidence or juice? Hmmm. (Not the rosy cheeks, he's always had those and I think they're cute.) 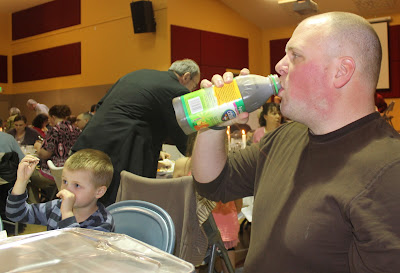 So my poor babe couldn't eat the Passover meal, or many of the yummy things we had for dinner those days. I think that week we were invited to more people's houses for meals than ever. 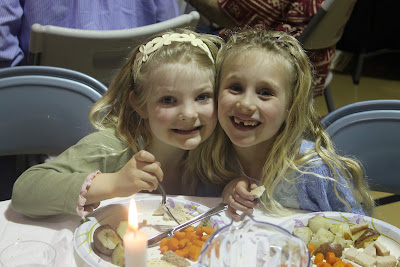 So we made it through the Seder and the Passover meal, but really it was more like trying to endure a really long fast. Keeping the kids quiet, dealing with a puking boy and stuffing matzah in to the mouth of an "on the verve of screaming" Berg was a little much. I think in the future, we'll just stick to our own lots of work, in a different way, Passover meal at home.
Posted by The Johnsons at 8:47 PM

Amber,
Well I know that I shouldn't be laughing, because poor Eben and his vomiting is certainly no picnic, nor is a hungry one year old, but that was pretty funny. Maybe someday everyone will look back and smile.
Love,
Momacita

And at least you learned a valuable lesson about your totally awesome family traditions! I agree, I like the kid involved crazy way. My MOPS girls did a Seder too this year! It was way fun! (But not very contemptual....)

Way to go on sticking to your guns Peter! Maybe you should go see that Nutritionist Crystal and Trav are seeing?