The Mystery Of Christmas!

Peter and I were asked by our crazy friend, Jeremy, to be a part of our church's Christmas musical extraordinaire, which he's written and directed for the past couple years. It really was an undertaking. I actually thought there was no way we were going to pull off all he had imagined. But he did it! After weeks of practicing on Monday nights, (so much for my new goal of going to Women's Bible study) we pulled off three performances even though we never made it through the whole thing without interruptions during practices! Thanks to God for that! It was a great time. Although it made the holiday season a little busier, it was fun to be together as a couple and do something we love - act goofy. Actually, it was less hectic than last year's musical, right after Pella was born.

The kids sat with Grandma and Grandpa during the Saturday night performance. (I hope Eben was happier than what it looks like, bored out of his mind. Of course seeing Mama and Dada dance and sing is no big deal since we make fools of ourselves daily in front of our kids.) 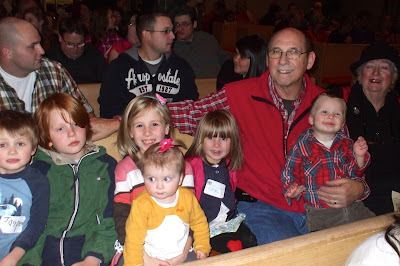 The one picture I have of the musical. Thanks, Grandpa! 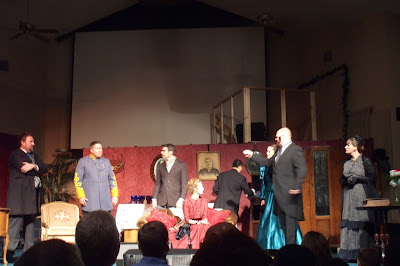 Ms. Mildred Marmon, played by Niki, and I before the show. 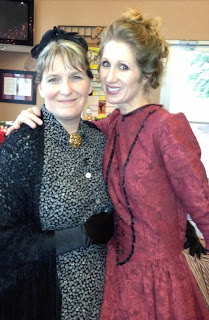 Rufus and Francine DeGalleon.
I turned the pioneer dress I made into a Victorian one by adding black trim, a hoop skirt and a big 'ole bustle. Peter added lots of facial hair to his face with glue. He's getting to have quite a fake mustache collection. 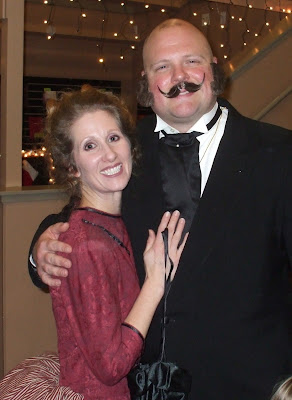 And finally...The Mystery of Christmas:

I can't wait to see the Christmas musical when you add it to the blog. Cute costumes. Love the facial hair on Peter!
Love,
Momacita

Regarding that last pic of you and Peter, "excuse me sir, I mustache you a question" ha ha ha ha ha!