On June 18th we left Eben and Kivi at Grandma and Grandpa's and flew down to Orange County, CA with Jasper and Opal - the two freebies. After a day at the Magic Castle (a super cool magician's mansion) we left the babies with Poppie and Nonnie and joined up with our church's Mexico mission team at the Long Beach airport.

After many failed attempts to cross the border into Mexico, we finally remembered to pray and God got us right in. Our Mexico experience was awesome! We stayed in a hotel in San Vicente, which we brought in our own military cots to sleep on - yes, in the hotel. There were roosters to wake us up every morning at 4 am. And it was so hot that we all made a special stop at a Home Depot before the border so everyone could buy fans - which basically just blew the hot air around the room. Oh well, it sounded like it was doing something.

Every day we would eat breakfast, lunch and dinner in this cutest hut: 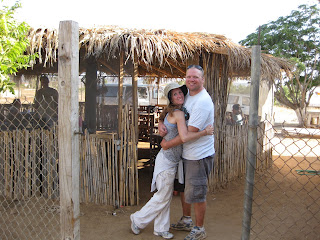 And I fell in love with refried beans. We had them at every meal. I keep trying to make them and I'm failing miserably.

Our main goal while we were there was to build pig pens, a fenced garden, a chicken coop, plant an orchard, and erect a windmill to pump water to the afore mentioned things on a men's recovery ranch. I was on team garden, and Peter was the leader of the pig team.

Day one however, everyone ended up on Peter's pig team because he needed 50 some odd holes dug out of the clay/cement dirt for post holes and the rest of us had to wait for the back hoe to dig holes for our projects. After digging about 16 holes by hand at the end of day, no one thought we were going to finish our projects by the end of the week. But plans were changed (pounding rebar instead of digging post holes), the back hoe finished and God was good...and all of the projects were completed!!

We even did a little extra project, our Women Shed: 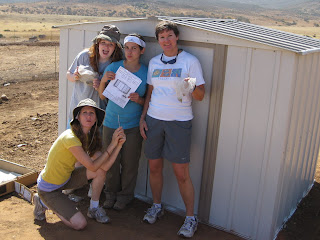 No boys were allowed in the building of the two Women Sheds and this whole thing was put together with one screwdriver! What? No one thought to bring more than one screwdriver? No. Oh yes, we had a drill, but it had no bits.

Here's Peter and his pig team in one of their three newly constructed hog shade things: 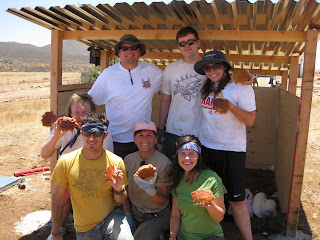 They also built a mommy/baby pig birthing suite and I helped run electrical wire around all the pens. Al Hall helped to test the shock factor of the electric fence.

And here's our whole team at the finished windmill: 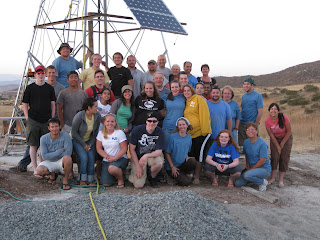 We were able to meet some of the great people of San Vicente, go to church, play with the kids at the Casa (a home for women and their children) and at a migrant camp, and even spend an afternoon at a water park.
I know God is doing many great things in this part of Mexico and it was wonderful to be able to be a small part of it and share this experience with my amazing hubby. I loved seeing him play with the kids, work hard, be a great leader, and encourage others. He bought me a "going steady" friendship bracelet from a vendor outside our hotel the first day and he took me to ice cream every night. It's wonderful to serve God with such a great man.

How fun! I would love to eat some real refried beans, sounds yummy!

You guys are so cute! What are the people holding in their hands in the pig shade picture? Thanks for the report-it is so encouraging to see all that went on!
Tiff

You guys are so cute! What are the people holding in their hands in the pig shade picture? Thanks for the report-it is so encouraging to see all that went on!
Tiff

Good job on the women shed with one screwdriver!