On February 17th, the Schocks threw us an amazing murder mystery baby shower for Pella! They've thrown us a Victorian one for Opal and a redneck one for Berg, this time we went to the Old West! They went to such great detail our invitations were even Western Unions. 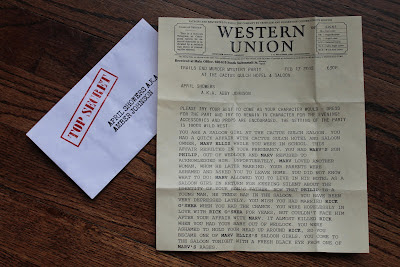 I was still sick so I slept the entire day so I would have some energy for this fun night. Peter rented us some great costumes. He had to buy a mustache and beard, because facial hair is his new fun costume of choice I guess. Peter was Rick O'Shea, a deputy, and I was April Showers, a saloon girl who worked at the Cactus Gulch Hotel and Saloon. 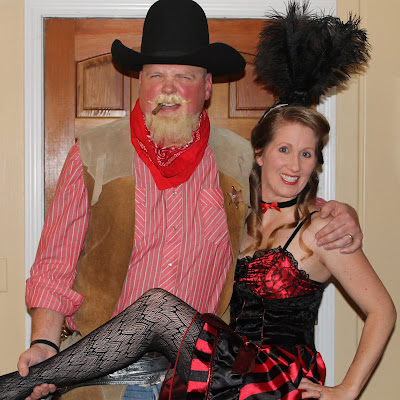 John (Phillip DeGlas, my son) was the bartender and Shari (Babs E. Goat) was a governess for the hated Marv Ellis, played by Jeremy. They had turned their house inside out for this event. The living room was transformed into a saloon complete with a bar and wagon wheel chandeliers! After socializing in our western roles, ordering drinks from the bar, chili and cornbread eating and figuring out who everyone was and what they had been up to, the evil Marv was found dead on the back porch! 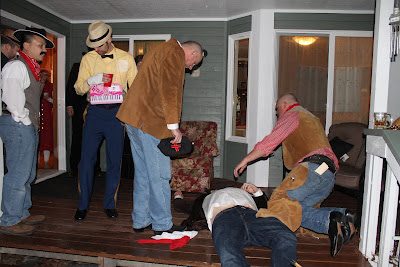 Rick O'Shea and Dusty Rhodes (Tung) share a special moment. This should've been a clue for us all about the murder, but none of us caught on. Peter just can't say no to a good mustache. 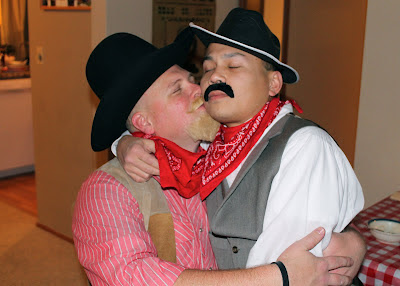 We all chatted again and tried to figure out who killed Marv. We were all pretty happy he had died, he had given me a black eye earlier. 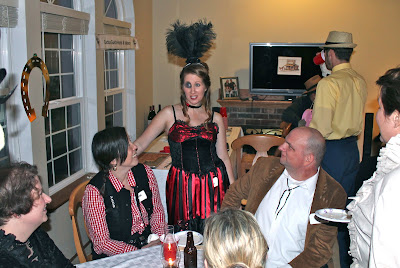 Dusty Rhodes (Tung) ended up being the one to strangle Marv Ellis with Candie Cain's (Marion) stocking. The part that no one figured out was that Dusty killed Marv to protect her sister Dee Railed (Hope) from his advances. Yes, her. Dusty was…a woman! So we took a portrait of all the girls together. Even the murderer. You can see Tung's feminine beauty now that he doesn't have on his mustache. 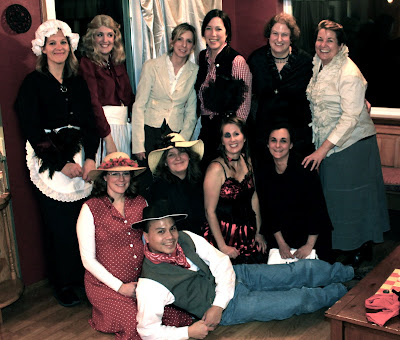 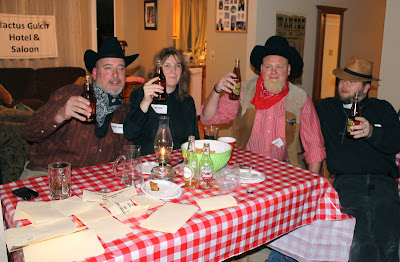 Tony downed his in about .5 seconds. It was amazing! 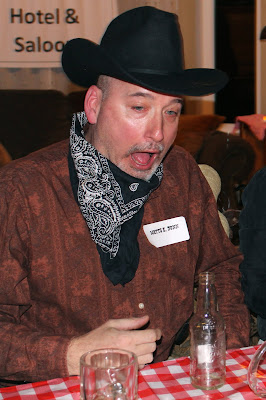 No one else even got close! So, Tony was the winner of the murder mystery, but Jeremy, although he died earlier in the night and was hated by all, won the chili cooking contest! 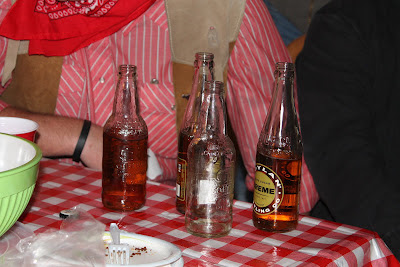 Our Lake City friends who attended the mystery, in costume, and brought delicious food, and acted out some silly western parts were really great sports! 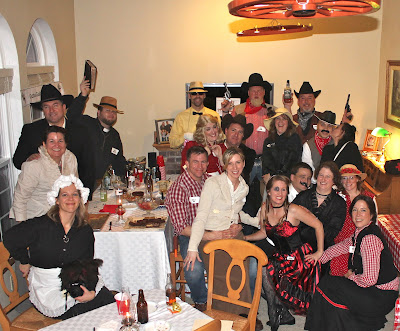 A murder mystery baby shower is definitely the best way to celebrate a baby! Fun, friends, food, fantasy and oh yes, let's not forget...Baby Pella! Thank you so much, Schocks, for a wonderful night full of fun memories! 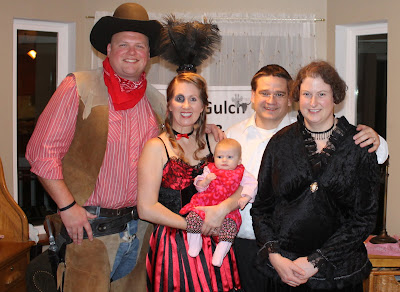 How special of Shari and John to go to so much effort on your behalf, and what a fun way to celebrate baby Pella. What great friends you have!
Love,
Momacita

Those Schocks sure know how to throw a party! Looks like a rootin' hootin' good time, ;)