Inspired by the recent addition on the garage (it was a stage for a while) and an air guitar gift for Jasper's birthday, the kids chose to be Rock Stars for LC3's Harvest Carnival this year. 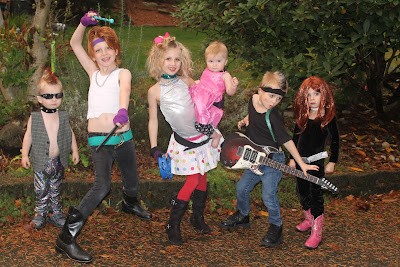 Berg was by far the most photographed by total strangers the whole night. He impressed his audience with his duct tape and foil studded jewelry, mohawk and sparkle pants, which I made an hour before the event and kept falling off the whole night.


Drummer Eben was the best sport as he squeezed into his sister's skinny jeans and dawned eyeliner for the night. He prepared us by having us watch Phineas and Ferb's rock star episode. He was going for the Baljeet rock star look.
Opal again wore a wig and transformed her look with big hair.
Jasper was so excited to get to show off his guitar and his cool look, including black painted finger nails, to the world, he carried it around all night.
Pop Star Kivi accompanied us on tambourine.
Pella and I also had studded neck bands, but you can't tell. She left it on all night, but she wouldn't wear her wig. Baby Rock Stars - what'da ya do? But my other baby totally wore his wig, facial hair and tatoos even! (Yes, that's Peter holding me, not a total stranger.) 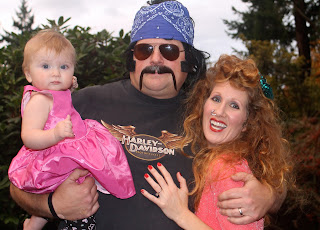 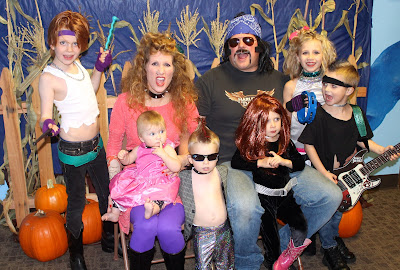 We met up with Grandma and Grandpa, ate corn dogs, played lots of carnival games, did the cupcake walk and then left the building. 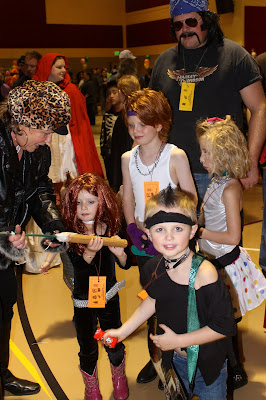 Backstage, we tallied how much we were paid for the performance and sampled it in our comfy jammies. 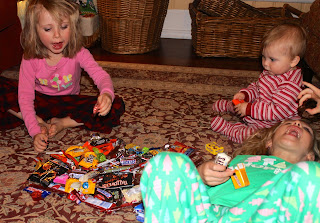 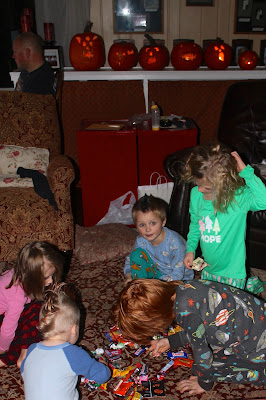 What's so funny to me about this year's Halloween costumes and the family picture, is that it is so opposite of who you all really are. Love the skinny jeans on the boys and the black nail polish. A fun idea, and I bet the kids really had a good time. You are so creative!!!!!
I love you,
Momacita