The morning of March 9th, our midwife called to tell us that we had to go to the hospital to have the baby. It turns out that all that itching I'd been having was the result of bile building up in my skin because my liver was producing way too much of it and if we didn't get the baby out, my body would end up killing him! It's called cholestasis. So we took our belly picture and headed to St. Joe's hospital. 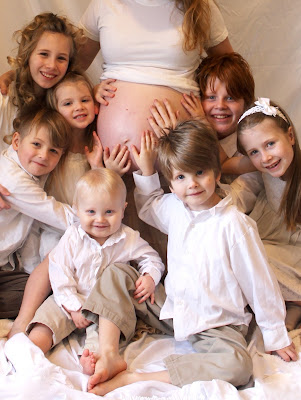 This was a different birthing experience. The hurry up and wait, the change over of many nurses during our stay, being told what to do, constrained by many contraptions, a slow Pitocin induced labor, the sterile environment, the T.V. that I couldn't stop watching (a marathon show all about people over 600 lbs), having to pee every 5 minutes while being hooked up to an IV during contractions and horrible coughing fits (I was so sick.), and, oh, did I mention the itching, insane itching! I really appreciated our "normal" fast births. But I praised God that we were here in this hospital and that our little man would be here soon. 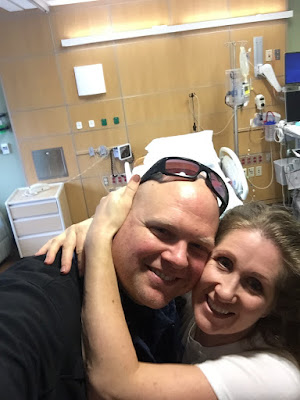 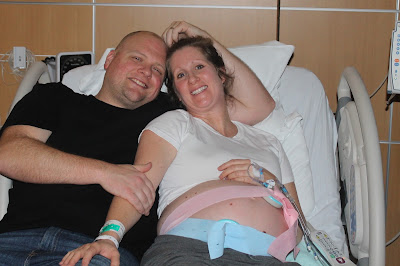 I was able to spend most of that first day in the tub, which was better than nothing.  Lots of hard, but not hard enough contractions all day, going pee, a lot, and coughing. Then, we think, because the doctor wanted to go home for dinner, he turned my Pitocin down for the evening and I got to have a long, not restful night, full of contractions that just keep you awake, but aren't as hard as before and wondering why we aren't just having this baby if we had to rush in here. 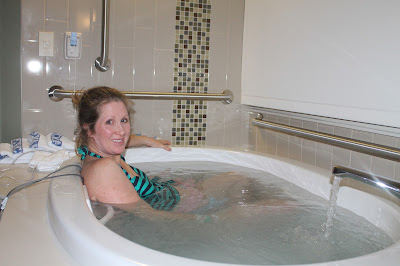 The next afternoon, the doctor turned back up the Pitocin and then I thought, "Oh, I know this feeling, now the baby will come any second!" But no. That feeling lasted all day and still no baby. The doctor told us that we needed to break my water, and when I asked why and the nurse tried to ask on my behalf he got into it with the nurse. He and the nurse had a whole "conversation" in the hallway. And then the hospital manager had to come in and apologize. I finally decided that breaking the water was a good plan when after another whole day of contractions and no progress, (I was dilated to a one.) I started feeling chipper and fine and not in pain at all. 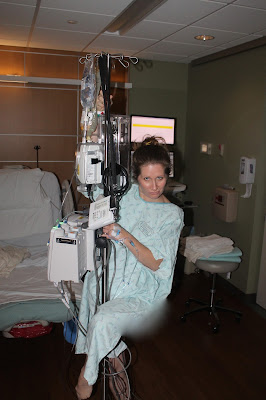 So my waters were broke, and I got into this lovely position, because I couldn't have the baby in the water. Not allowed. And within minutes the baby came right out. I felt much more tired and it was much more painful than my other births. 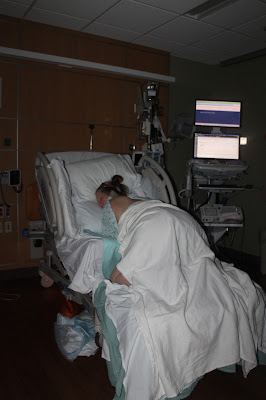 At 6:41pm on March 10th, we had a beautiful little man! At 6 lbs 2oz, 19 inches he was a good size for being one month premature. Right away he cried, they put him on my stomach and the doctor yanked the placenta out and was washing up. 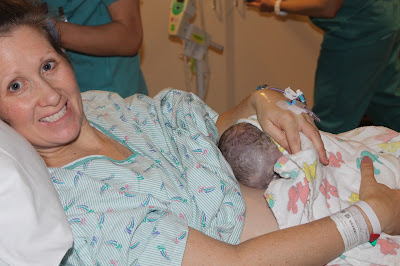 Then Becky, the good nurse, who stood up for us earlier, checked Baby Thumper and realized he was purple and not breathing and she whisked him away, pulled an emergency cord and doctors and nurses flooded the room to tend to our brand new Johnson. At first the doctor who delivered him tried to listen with his stethoscope as the nurse felt for a pulse. He said, "There's no heart beat." as a matter of fact in his Egyptian accent and Becky almost yelled at him, "There's a heartbeat, it's just SLOW!" Then he backed away as all the other doctors arrived, slipped out of the room and we never saw him again. 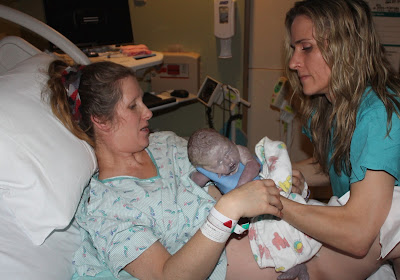 I feel like God had prepared me for all of this, because I wasn't worried at all. Before he was born, I imagined him not breathing as soon as he came out, so when they laid him on me, I was a bit surprised and thought, "Wow, this is it? Nothing is wrong with him? I get to actually hold him?" That didn't last long before they took him way to get him breathing again, but when they did, I realized that God had been preparing me for something. It was just delayed. I got to hold him first. We prayed as they worked on him. Dada cried. 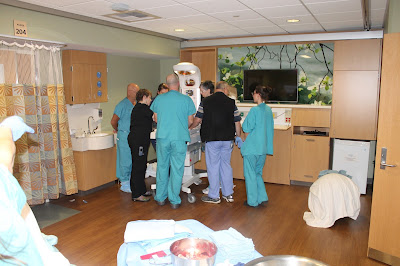 Ten minutes later he was stable and we got to kiss him before they took him up to the NICU. Apparently, he had what's called secondary apnea which takes resuscitation. He didn't have much stimulation after birth. We usually "play" with our babies a lot right after they're born. But I was is such an awkward position and being at the hospital I figured they knew what they were doing, so I just kept him right there laying on my stomach. I should've known better and played with him. Not that that would've changed anything. I think we were in the hospital for a reason. 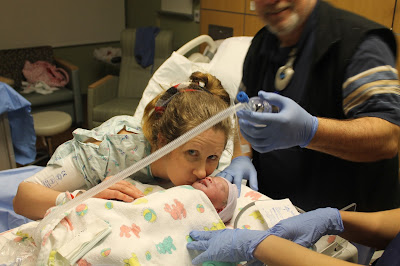 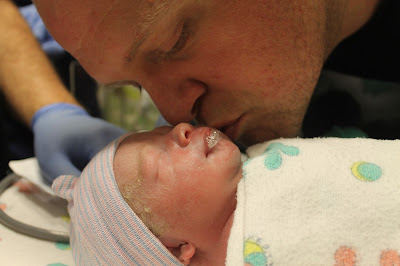 Dada got to go see him in his new room before they hooked up all his tubes and put him in the incubator. 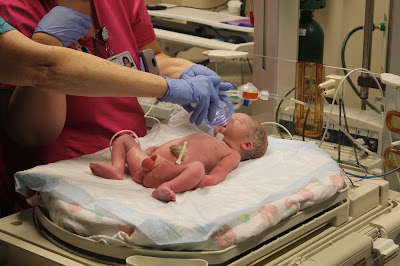 Poppie and Nonnie brought the kids to the hospital around 9pm to see us. They couldn't see the baby though. Actually, I hadn't even seen the baby again yet. This birth was especially hard on Kivi Pea who was really looking forward to seeing this birth live, in our hot tub, in our room. Now she couldn't even see him at all and she was very worried that she wouldn't get to see him ever. Poor baby. 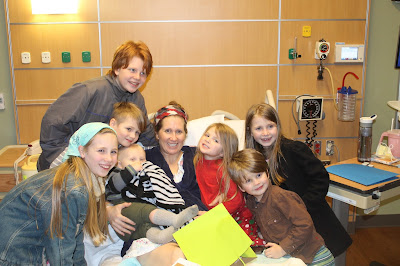 At 11pm we were able to go up to Thumper's room and see him! We had tried to go earlier, but they had him hog tied to try and get an IV in him in every vein they could. They couldn't. 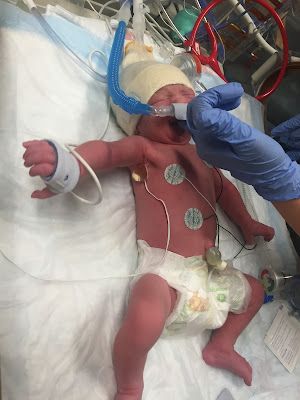 So when we saw him he had prick marks everywhere. They tried on his hands, feet, arms, all over, even his umbilical cord, but no success. So they put a feeding tube down his nose. 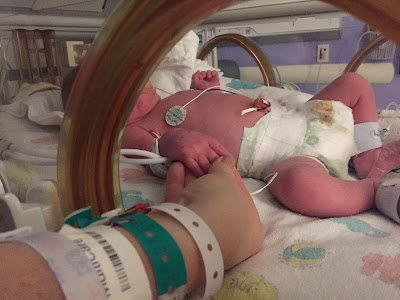 His nurse wrapped him up so we could hold him. 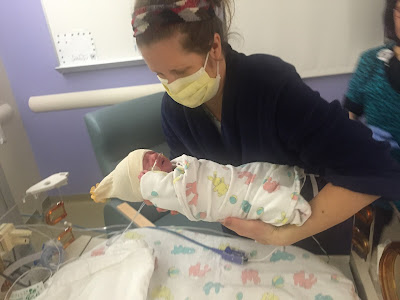 We even got to take his "Kissing Picture"!! Happy Birthday, Coal Lyon! How do we love you so much already?!! 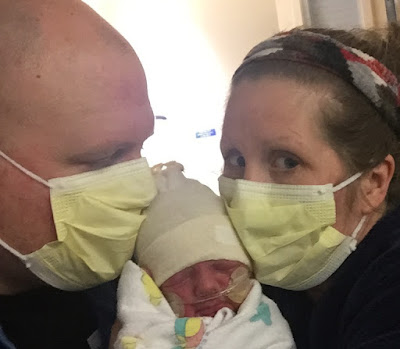 The next morning, after sleeping in our hospital room, we went back to Coal's room and found out that he had stopped breathing again during the night. So they would be keeping him for a while. We gave him the name Coal, because it's a rock, we'll always remember he was our Cholestasis (pronounced cole uh stay sis)  baby, and after my sister Buggy who we called Coley and Lyon, a family name on Mama's side of the family, plus Lyon is just a great name. 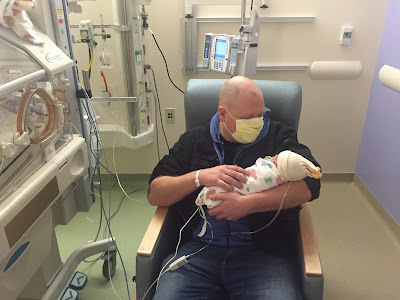 Then we fed him and spent the whole day just looking at his cute little face. 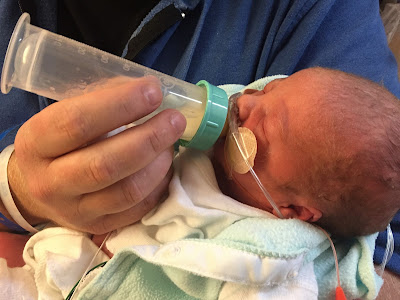 We love you so much, Coal! Your brothers and sisters all love you and are excited to see you even though you have scared them all! Everyone is praying for you and can't wait to meet you. We know God has a great plan for you, because He saved your life three times already! You are a mira - Coal!