March 1st, Thursday
We went through customs around 7am, rode a train to King’s Cross Station and saw platform 9 3/4. Snow! On our way to the British Museum we stopped for our first tea because it was so cold and snowy. At the museum we tried to stay awake and look at all of the amazing artifacts. Our favorite was the Egypt room; seeing all of the giant statues of pharaohs and the Rosetta Stone. It’s very cold in there because they are trying to preserve the art, so, more tea and scones, which we learned is called “Cream Tea”. More artifacts and then we Ubered to our Airbnb near the Tower Bridge. 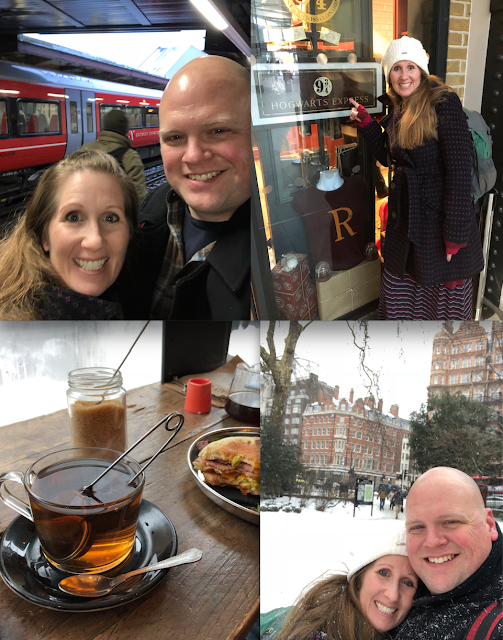 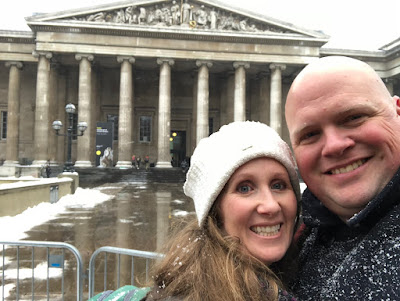 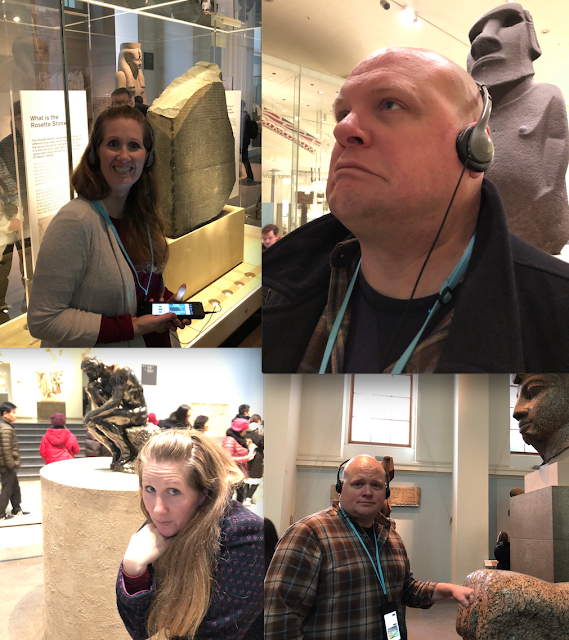 March 2nd, Friday
Lots of snow! So we took an Uber to Westminster Abbey and had breakfast in the basement,
the Cellarium Cafe. Dada had a traditional English Breakfast with sausage, eggs, beans and
black pudding (congealed blood and oatmeal!). I went with eggs Florentine. Then we got our
headphones and went on our audio tour around the Abbey. So many dead people! I asked one
of the reverends some questions and she kept finding us along our tour and giving us helpful
hints and asking how we were doing. Then she asked us if we wanted to pray with her in the
closed off section of the Abbey, The Shrine of Edward the Confessor, where all of the high kings
are buried!! It was amazing! I got shivers all over. How cool to be praying in such a beautiful
place that so many people have come to pray in for hundreds of years (and where royal
coronations and weddings take place). Plus this guy died in the Eleventh Century!
We took communion, finished the tour and had lunch in the same restaurant as before. Then we
braved the cold (well, we had to buy Peter a hat from a street vendor - his poor head was freezing!) and walked around the city a bit and then came back to the Abbey for the evening choir service. We were going to walk to dinner, but found the Royal Opera House instead and ended up seeing the ballet Giselle right then. By their definition it was a ballet about zombie virgins who try to kill men! They were the most graceful zombies I’ve ever seen and the show was a treat. Afterwards we ate some very spicy Indian food and Ubered home. 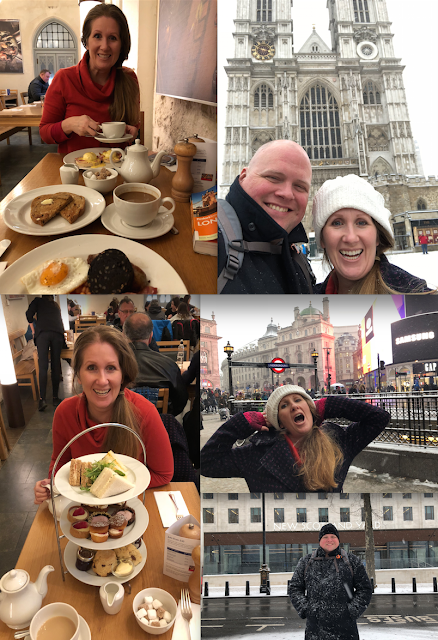 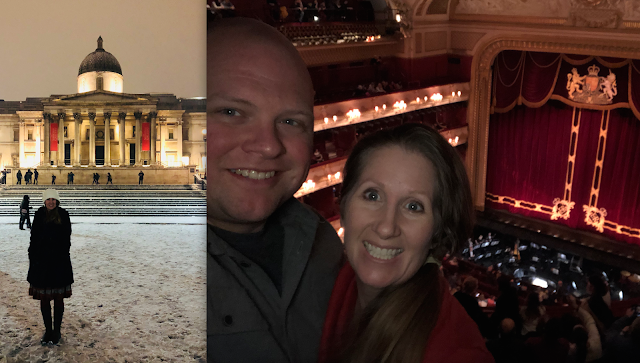 March 3rd, Saturday
We walked to a French restaurant for some breakfast and then to the Tower of London.
I was the most impressed with how thick those Normans built walls. No wonder the thing is still standing! I also got to see where the Two Princes, from my favorite sad history story, were kept in the tower and where their bones were found. It made me dislike Richard III even more. Horrible king, uncle and person. We opted out of the audio tour, but there were so many great signs and interactive things to do I never even wished we had them. After I had my fill of exploring every nook and cranny we took a very cold stroll across the Tower Bridge. We went into Shakespeare's favorite pub but ended up eating fish and chips at the restaurant next to the Globe Theater, The
Swan. We backtracked to find some delicious desserts we had seen along the way and ended up buying three! The best - a huge raspberry meringue! We made it back to the Globe in time for some tea and our freezing outdoor show - Much Ado About Nothing. It was funny and well done. But this is the second Shakespeare we’ve seen wear modern clothes and I just want some big ‘ole poofy costumes! 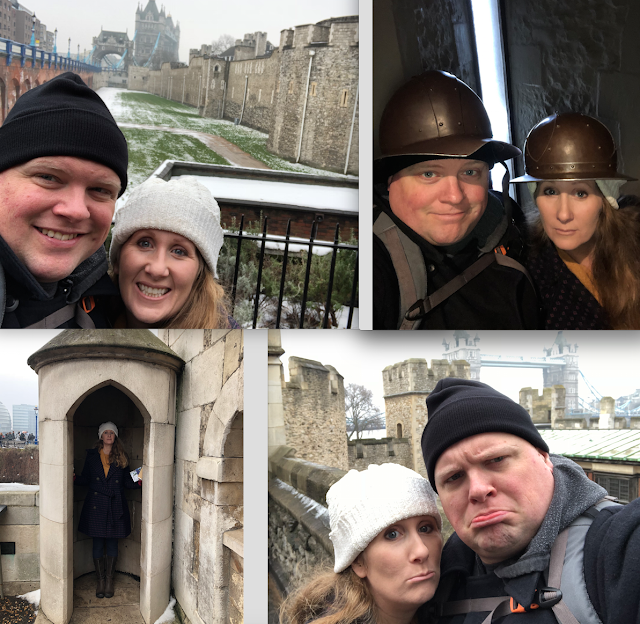 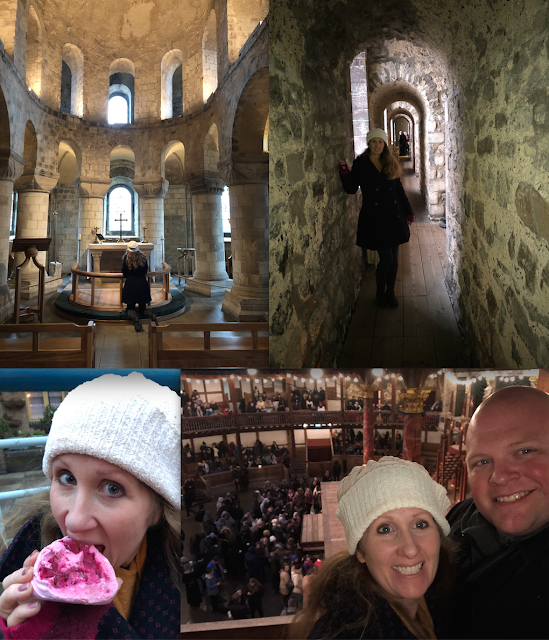 March 4th, Sunday
We packed up that morning, walked past the Roman Wall, took the Tube to a bus station where we had our first Pret a Manger breakfast and hopped on a tour bus which we toured with three lovely Americans, Halle (who actually helped us find the correct Tube) and Wade and Sarah. The five of us were actually the only English speaking people on our tour.
The rest of the bus was a Japanese tour. So our tour guide spoke everything in English
and then Japanese, she never stopped talking! What a hard job. Our first stop was Windsor
castle and the Queen’s flag was flying over the tower which meant she was there.
We actually could have seen her if we had spent our hour going to the service at St. George’s Chapel instead of the tour we found out later. But we took the tour, and I’m glad. It was just the right amount of time to walk around the grounds, visit Mary’s Doll House and see the opulence inside the castle while listening to tidbits of history on our audio players. The views from the castle were stunning and the town around it very quaint.
Back on the bus and off to Stonehenge or as the Japanese call it Stonehenge-ay. This is now how I say it. It’s catchy, and our tour guide must have said it 40 times so it’s stuck in my brain. The big huge rocks stuck upright into the ground are really that. There are big huge rocks stuck into the ground. And even knowing that I still wanted to see them in person and take our picture and that’s what we did. The only other thing I wanted to do was walk around it, but because of the snow we could only go 3/4ths of the way around. Good thing this was not on my Life Goal list or I would have been disappointed. I was actually oddly happy that I got to see these famous rocks in person, we are a “Rock” loving family, you know.
Our last stop was Bath, a beautiful, old town built around Roman baths (which had actually
been completely forgotten for hundreds of years...twice!) We were going to go to the Roman baths,
but ended up having High Tea with Wade and Sarah while the tour group went in and saw the
baths from above, so we decided - no need to do that, you can’t even wade in them anyway.
Dada and I decided to not get back on the tour bus back to London and stayed in the unique
town of Bath at an Airbnb near the Circle. After walking around the sleeping gardens and
bath stone buildings we dropped our bags off at the Airbnb and walked a block to dinner at a
French restaurant where we had the most delicious mushroom soup and roasted vegetables ever!
The boufe and creme brûlée weren’t bad either. Then to bed. 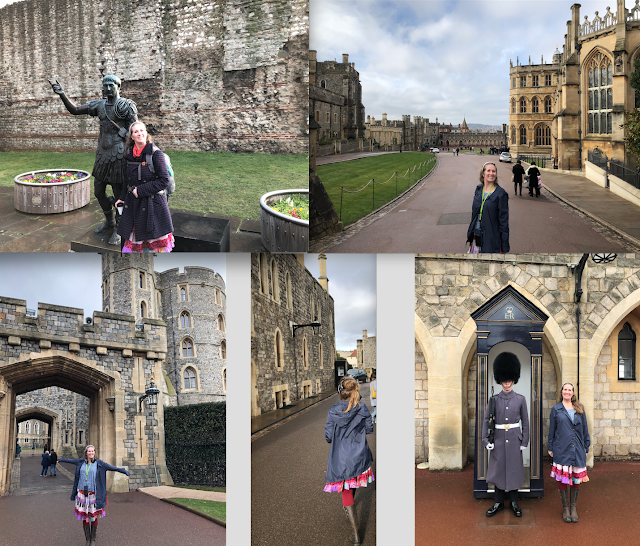 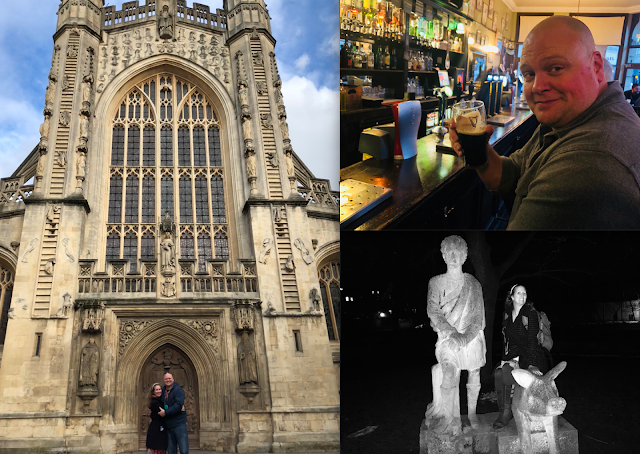 March 5th, Monday
Walked to breakfast at Boston Tea Party and got picked up by our rental car company.
Dada drove on the left side of the road in the right side of the car - England style! It was
sooo scary! My whole body was tightened up for most of the drive. We drove over to the
Cotswolds to spend a day in the country and it was lovely! We did a walking tour with our
Rick Steve’s book at the precious town of Chipping Campden after some lunch in a converted
old Silk Mill and did the same kind of self tour at Stow-in-the-Wold with tea at England’s oldest inn.
At both towns nice, local, old men also gave us some good sweet advice of what to see and the
history behind it. On our way back we walked around and even got to touch the even huger
stone circle at Avesbury in the pouring rain after having some tea and seeing the old well
inside the Red Lion Inn. That night we drove back to Bath, had a long, delicious dinner of fish pie for Dada and a melting chocolate bombe for dessert for Mama. 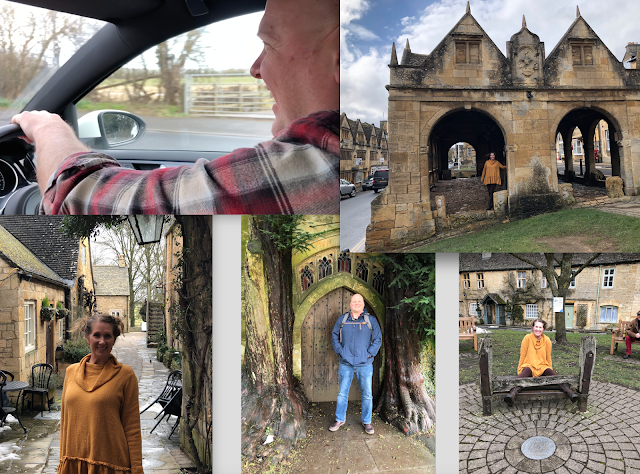 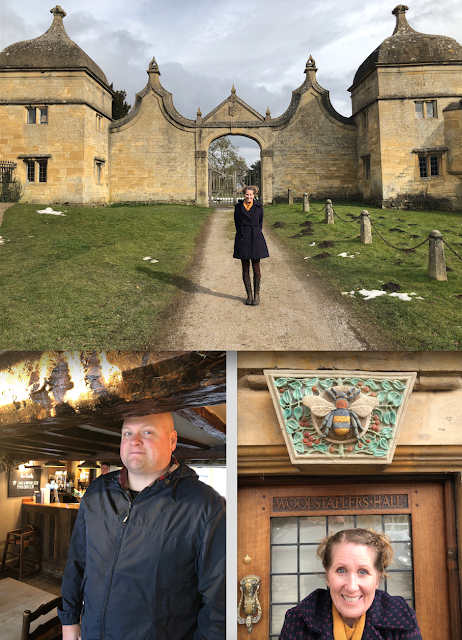 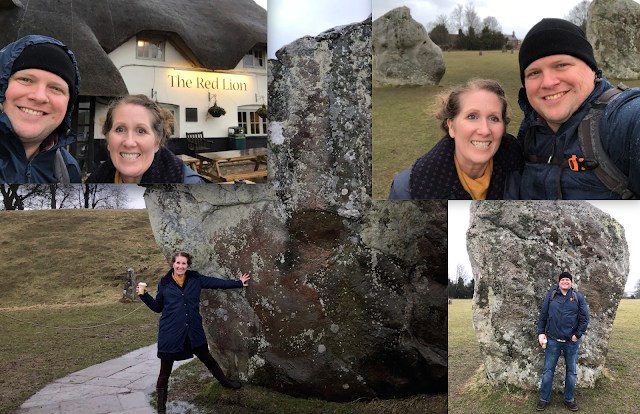 March 6th, Tuesday
After a little morning walk around Bath, we headed to the airport on a double-decker bus (with a raspberry meringue!), then flew to Ireland on Ryanair, because Dada found tickets for 15 pounds!! We walked around Dublin, found St. Patrick's Cathedral and other beautiful buildings and tried to
find corn beef, which turns out is an Americanized Irish food, so we never found it. We did, however, find many, many pubs... go figure!

March 7th, Wednesday
The next morning we headed to our tour of the Cliffs of Moher - an all day bus ride with total strangers! And we were the last ones on the bus - so we had to sit on opposite ends of the bus! But halfway through the ride there a kind lady traded with Peter so we could sit together. We had a couple of stops along the way; at some baby cliffs, for lunch (where as we waited in line outside for a table it started crazy hailing!), and a tiny town for a drink, but the main attraction was the Cliffs and they were on the opposite side of Ireland. It took all day to get there and back, but it was so beautiful that it was worth it! The drive was gorgeous! Green fields, castles and towers in ruins, walls made of boulders and sheep dotting the county side. We also learned a lot of history as our tour guide talked the entire drive! 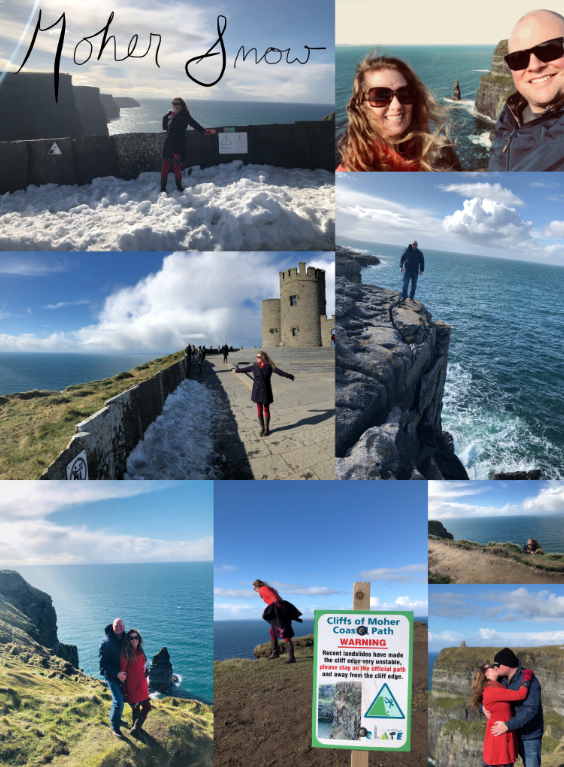 March 8th, Thursday While eating our Irish pasties we took a flight from Ireland to Edinburgh, Scotland and found our AirBnB. Peter was so magnificent at planning all of our trips, stays and excursions right from his phone on the day or the day before! We took quick nap in our beautiful room, the best of the trip - she even had breakfast and snacks for us in our room! When we were rested we headed out to see the town, had lunch at a restaurant called Amber and walked to the castle. After our self guided tour we walked down the Royal Mile all the way to the Holyrood House (which was closed when we got there), stopping here and there wherever our Rick Steve's said to see something interesting. We walked around some of the other parts of the city to see the Harry Potter inspired graveyard and had dinner at the Elephant Cafe where Rowling wrote the books and saw the crazy bathroom covered in Potter-themed graffiti. 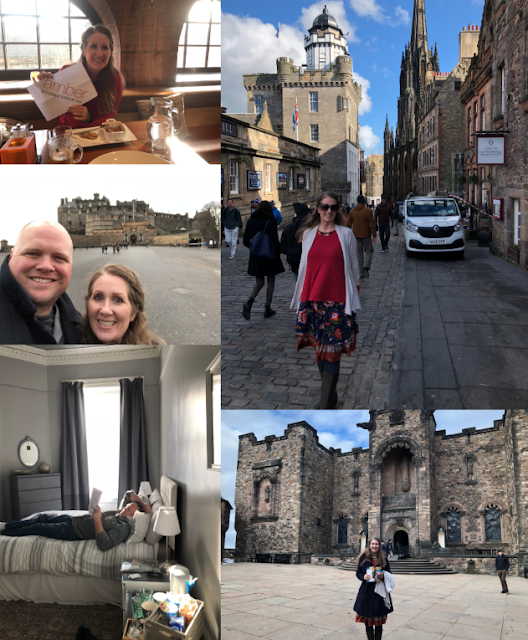 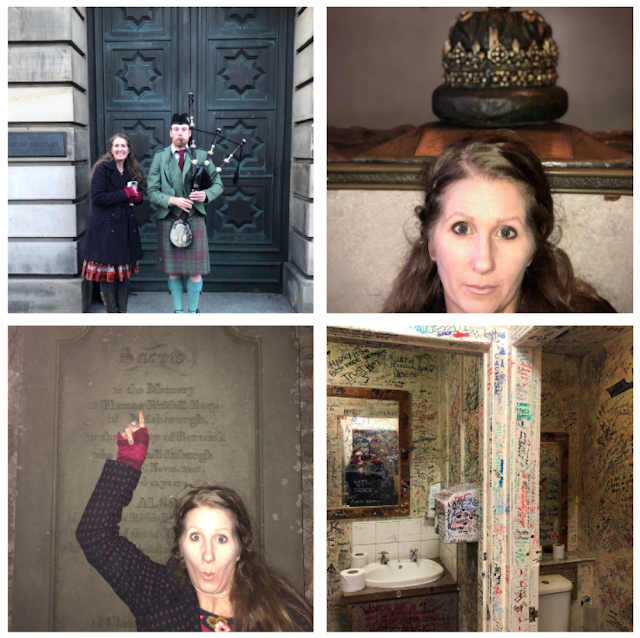 March 9th, Friday
We ate a Scottish breakfast and toured more of this history-filled town. I loved it! We went first to theNational Museum of Scotland. Then walked up to Giles Cathedral where a guide unveiled the covenant that was signed in blood by the covenanters when we begged. We walked all the way up to Calton Hill and saw lots of monuments, a breathtaking view of the city, and a beautiful sunset. We walked through the Martyrs of Reform Monument and back into the heart of the city The Last Drop, a restaurant where people would hang out to watch hangings and I tried Haggis - which is good and Dada had Sticky Toffee Pudding - which was better! 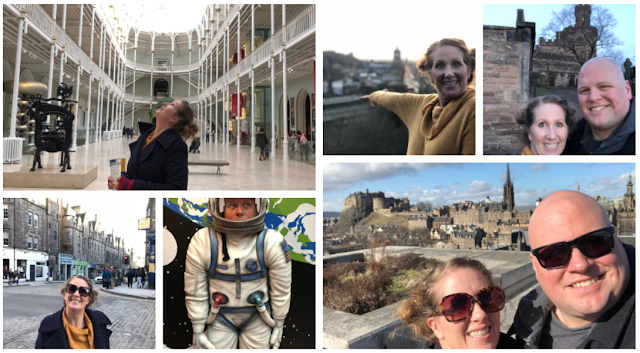 March 10th, Saturday
We rode a train back to London. Walked through the National Gallery in Trafalgar Square to Buckingham Palace (which was not open to the public since the queen lived there at that time) and then to the Cafe in the Crypt for our last Tea for dinner. 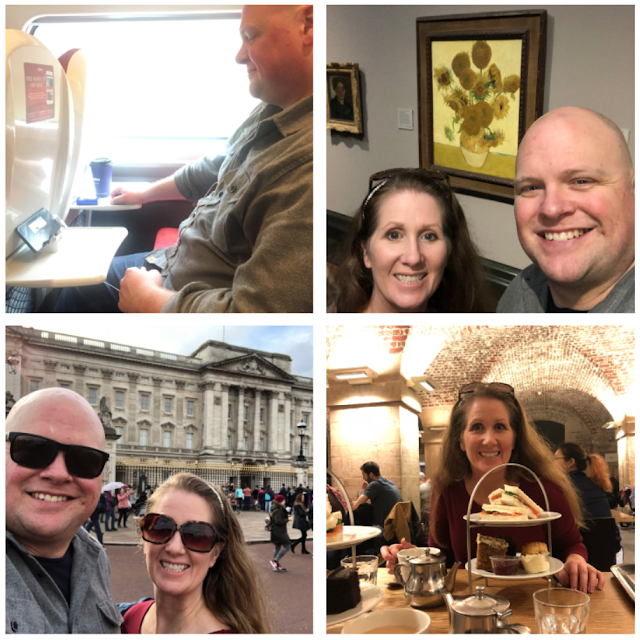