Motorcycles and a Bubba Story

Motorcycles
Peter's been getting in a lot of motorcycle time lately. We took the bike to Anderson Island when Travis and Crystal hosted an HFG weekend at their parent's cabin. Which was great fun!
But I think that was mainly to get ready for Peter's big motorcycle trip with his friends from college B-Dog and Jared. Chris loaned them a bike and they went around Washington for a couple of days (Aug 7-10th) and camped in the rain in a tent. Peter said they had a lot of fun. He hasn't gotten to ride for that long since before we were married! And the kids were super excited because they got to meet real, live Lodgeboys when they got back from their trip! 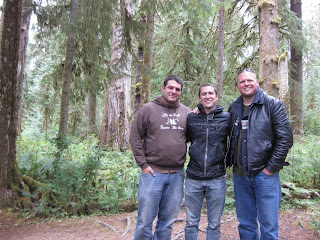 A Bubba Story
So after Peter got back from his trip, I took all the kids to the grocery store. I shop at Market Place. It's...different, but really cheap, so I love it! As we entered the store I noticed a slightly overweight woman. OK, like 500+ lbs. overweight. And that would've been fine, except she was wearing shorts that could've fit me. So they turned right into a "G"string. You get the picture. And whether it was right or wrong, I steered in the opposite direction. I had all 4 kids with me.
I made it through every isle of the grocery store without any problems, the kids did great! As we were checking out, I was putting the food on the checkout thingy with my back to the cashier and the 2 customers in front of me. Eben was in front of me in la la land humming and staring at the ceiling, Opal was holding a box of cereal in the cart. And Kivi and Jasper were in back of me near the other customers checking out.
All of a sudden, I heard Kivi cracking up laughing. I turned around to see her laughing at Jasper, who was standing about 2 feet away from the previously mentioned woman. His arms were outstretched like he was about to grab her large derrière loudly singing, "A big fat booty, a big fat booty" over and over! Aaaahhhhhh!
I had no idea what to do. I quickly went over to Jasper, took him by the arm and led him to the cart. I told him to stay right by the cart so I could see him. Then he started crying loudly and yells, "What did I do, Mama?" I couldn't even look at the lady. I'm not sure if she understood his 2 year old little voice, and I didn't want to make it more awkward by having him apologize. I didn't even look at the checker when it was my turn. I probably failed that one. Needless to say, we've had a lovely talk about booties, the word "fat", and not saying those two words together to anyone. 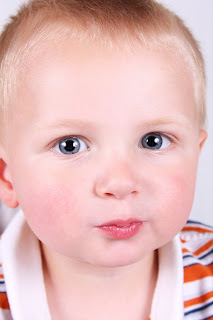 Hahahaha, I'm sorry but it's sounds funny. I'm sure you didn't feel so funny at the time. The things are kids say!

Ok, I'm just going to leave a comment on this post, even though I read the last 3! So, hilarious on the lady at the grocery store...I can only imagine what Peter said when you told him this. And the kids are SO CUTE with their memory verses! Adorable?

oh i didn't mean to leave a question mark...typo

Oh...kids are just so honest! Aubrey asked a fat lady if she had a baby in her belly. I apologized, but the woman was not amused. Needless to say we also had the discussion on the way home about not bringing up people's size to them.

well, i sure love that song that he made up! my friends and i sing it regularly.