After Christmas we lived in our crazy messiness the whole week. We slowly found homes for our new stuff, ate our gingerbread Bethlehem and had our first ever Game Week. 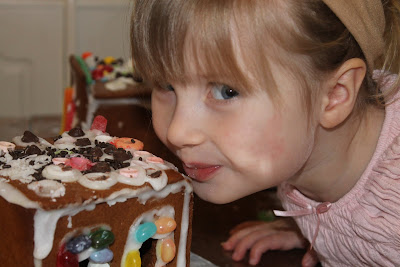 Dada put the kid's new net and swing up in the boys' room. 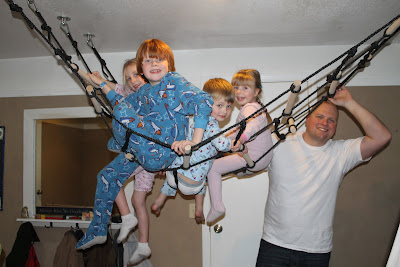 We played a ton of games while learning how to be a good loser and congratulate the winner and how to win without boasting. We played all of these (some just Mama and Dada played) plus Hide and Seek, and a game my sister and I made up when we were little called Statue Maker. Statue Maker was all of their favorite. 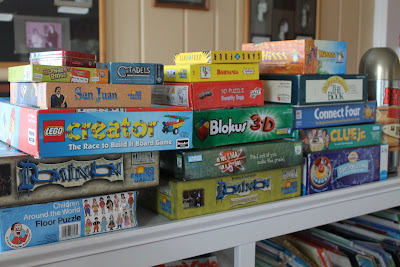 They also made up some interesting games like the Stick Your Booty in a Tinker Toy Can and Drum On It In Your Underwear game. 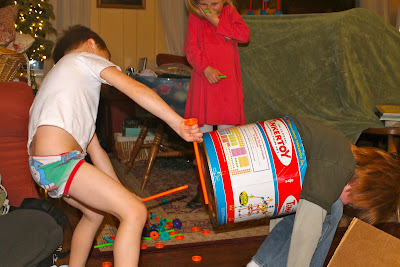 Every morning we reviewed our new jobs schedule which we started before baby Pella came, but then slacked when she actually arrived.
Our new plan is that in the morning after devotions, breakfast, getting dressed and story time, the big kids (Eben and Kivi) have JOBS! We've done jobs before, but nothing like this. Peter and I realized they could handle a lot more responsibility around the house and come up with a rotating schedule. One of them does all the laundry and dishes for a week while the other one:
cleans the kitchen - Mon.
shakes out the rugs and cleans the bathroom sinks - Tues.
vacuums - Wed.
cleans the toilets and bathroom floors - Thurs.
washes the tables and mops under them - Fri.
Then the next week they switch. They have all the way till lunch to get it done and they've been wonderful!! Berg loves to go around and help with the laundry and putting away silverware. 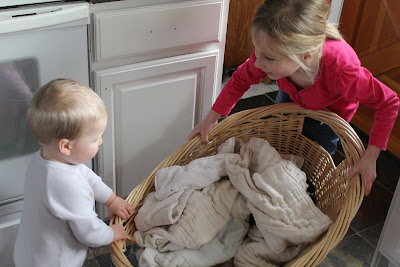 It took some training, but they now know what is expected and how to do a good job without complaining. You can always hear Eben humming or singing a song while he works. 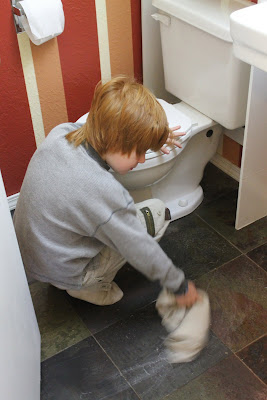 This week we also went to Ikea and bought a big boy mattress for Berg! Now he sleeps in the boy's room in his own bed. He does really well. We didn't know if he'd crawl out of bed or not, but we told him to stay in his bed - and he does! 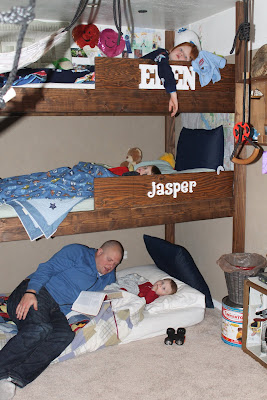 For New Year's Eve we went to Chris and Tonya's new cool house and played games and ate amazing homemade pizzas. We all toasted the New Year with a peppermint candy because the Martinelli's was already gone. 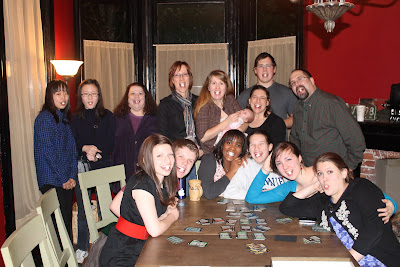 New Year's Day the kids "surprised" us with this huge poster they had been working on the whole day before. It's Peter and I on our wedding day and says Happy New Year! 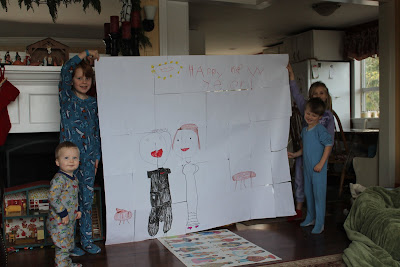 The amazing thing is that Kivi drew this little picture first, put a grid on it and then followed the grid to enlarge it onto the huge paper. They figured this out by watching Curious George, yay PBS! Right after this, the first activity of the New Year - go carting! 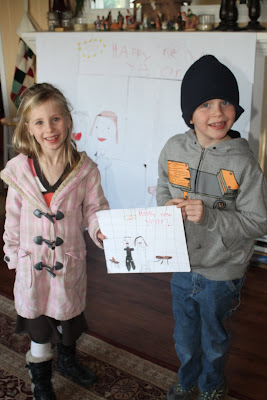 Look at the picture of Eben in his bed - he looks exhausted! No wonder, with all of the chores he and Kivi have to do. Can they take a break when Poppie and I come? Love the Game Week idea. Learning how to be a gracious loser and a humble winner is something some people never learn. What great parents you are.
Love, Momacita

WOW! Those are some awesome kids you have! Great idea on the jobs thing...