Christmas 2011 was a fun, busy, lots of stuff happening all at the same time kind of birthday celebration for our Lord. As soon as Grandma and Grandpa came over, we connected online with Nonnie and Poppie. Dada's cinnamon rolls cooled off so we could stick the candles and the chocolate nativity on top we all headed upstair to sing "Happy Birthday" to Jesus. 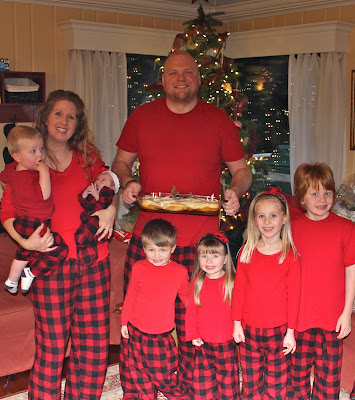 A departure from the traditional Dada reading Luke 2 was that the kids wanted to read this year. Which was actually good because Dada was sick, poor baby, and his throat hurt. 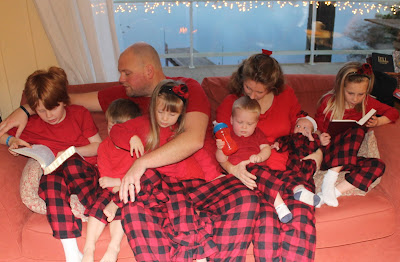 Our California family was able to look in on our chaos through the miracle of Skype. Mimi is meeting Pella. 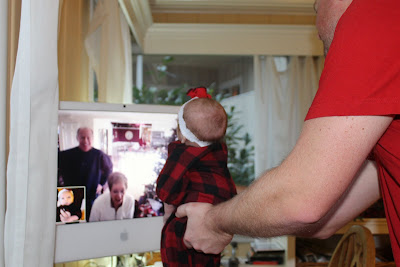 After eating Dada's delicious, gooey cinnamon treats we all opened our stockings, which the kids know full well that Dada and Mama stuff with goodies. I accidentally filled them way before Christmas and the kids informed me that Dada usually waits until Christmas Eve night to fill them. Oops - rookie stocking stuffer mistake, it was my first year stuffing them. We've also told them flat out that Santa died (Well, I mean the real one, St. Nicholas), so they know we have to fill them. I figured who cares if it's filled on Christmas Eve or any other day, they aren't allowed to open them until Christmas either way, but I took them out and waited anyway. 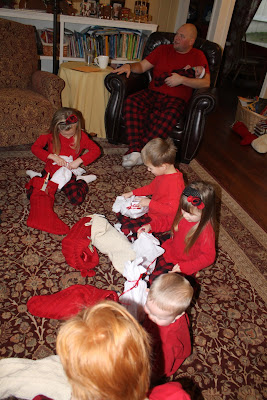 Then we hung them back up, cause they are so cute, and it took me many years to find so many of the same knitted stocking. (I even have an extra, in case of a major stocking non-matching dilemma.) Then we opened our presents. That was the very chaotic part. I think next year we'll take turns and wait and watch what everyone is opening. It all went so fast, it was crazy. Opal is explaining the present she bought for Berg. It was an orange truck, which he loves. (Uck, every vehicle is an Uck.) He sleeps with it every night. 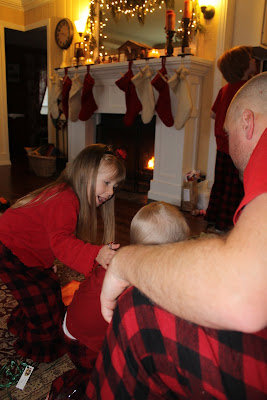 Eben and Kivi designed a complicated web of string for Dada to follow to his big present, a Kitchen Aid. He's been wanting one for a long time. 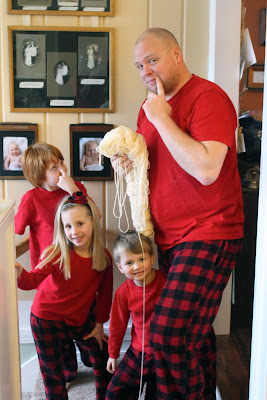 Uncle Chris and Uncle Tonya (as the kids call her now thanks to Jasper) and cousins came over and we got a shot of the big Johnson clan in front of the tree. We had Dada's cheese fondue, and Grandma brought meatballs, and lots of snacky foods for lunch. And we opened more presents. 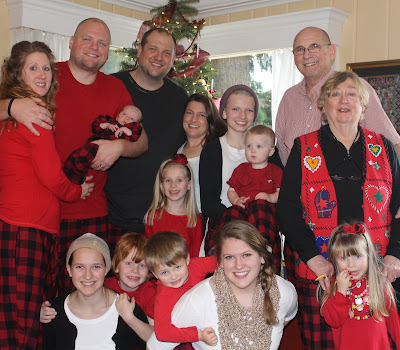 Mi familia en las pijamas rojas y negras.
Have I ever mentioned that we have a Spanish lesson every Thursday? 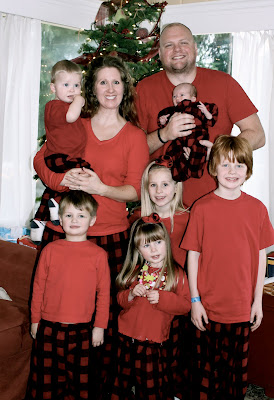 Dada and his sweet Pella on her first Christmas. 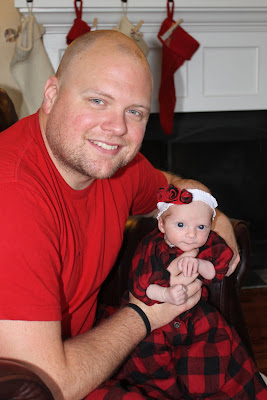 The kids big gift this year which poor, sick Dada still did a scavenger hunt for, was a new LAPTOP!! They were so excited! All year long the kids would all talk about saving their money so they could buy a laptop and give it to Eben - the computer lover. They all like to try and play games or at least try to make the mouse go where they want it to go and we knew it would come in handy for homeschooling too. So Eben has to share, but I don't think he minds. 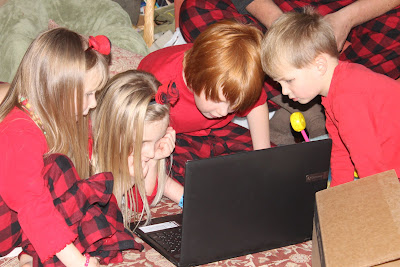 Mama and Dada resting on the Dada chair with Pella Pie. (Eben already figuring out the laptop in the dining room behind us.) 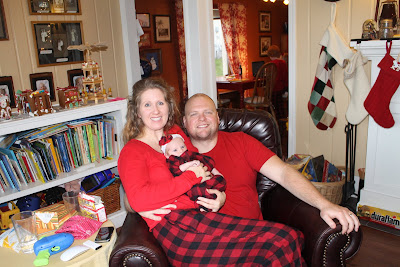 The kids got a rockin' 1970's doll house from the Uncles and cousins. Uncle Chris had just as much fun setting up the furniture as the girls did. 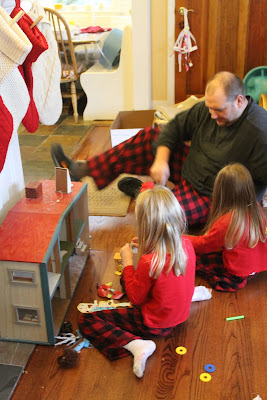 The traditional "Baby's First Christmas" picture in the huge stocking I sewed for Eben so long ago. 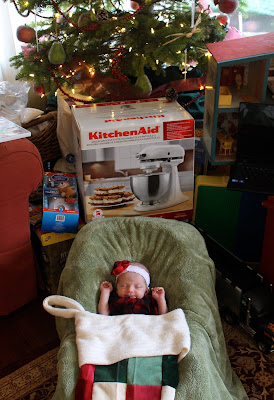 The 6 little johnsons in front of the tree. This picture actually took 4 different photo sessions. We had to keep waiting for Berg and Pella to be happy. We actually took these last 3 pics the next day, with all the presents piled under the tree like my mamacita used to do. 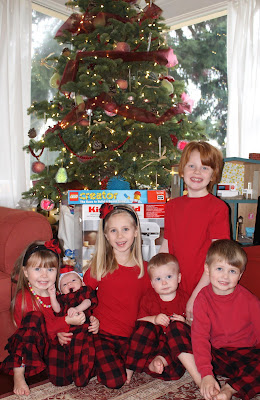 A close-up of Pella's pocket pajamas. I made her's out of the insides of pockets, and the part with the buttons down the front is made up of three different fronts of men's pants, you know, the part that opens in front of the crotch. They took me forever to make, like 4 hours, so I'm documenting them. 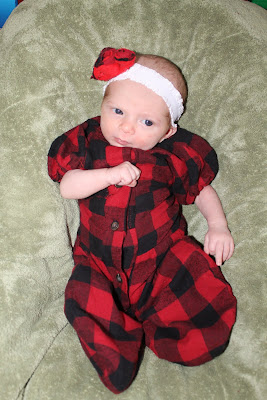 Merry Crazy Christmas! All birthdays are a wild, fun time over here. Christmas is the greatest birthday ever! Happy birthday, Jesus!

It's Christmas, Ya! People won't get that unless they saw your play - which was very cute and you and Peter were very funny! Skyping is now one of my favorite things to look forward to on Christmas - watching all the kids open their gifts and having them run over to the computer and show us what they got. Good luck on trying to make it less crazy next year! You've got 6 kids - what do you expect?!! Love to you all,
Momacita

I love that Uncle Chris even has matching jammies. Kudos to you on Pella's jammies by the way! Impressive! And thanks for the tip on the cinnamon rolls. We actually were not that smart and had to watch for melted wax in the middle of a few of ours. Whoops....;D