Mimi came to a sick house on Jan. 9th the day before we were suppose to drive down to Bend. Eben and Mama spent all day lying on the couch and Dada chair and that should've been the clue that we should've just stayed home. The next day though, we rallied and decided we would be fine to take the drive. We didn't want to miss the trip or have the rest of our family miss out on the fun. So sweating and panting and painstakingly we packed everything into the van. The best part of the trip was the snow! The first day we got there it looked like a desert but the next day it started snowing and kept on till morning. So as soon as the deck was just covered, Peter and Mr. Steve made snow angels and then hopped into the hot tub. 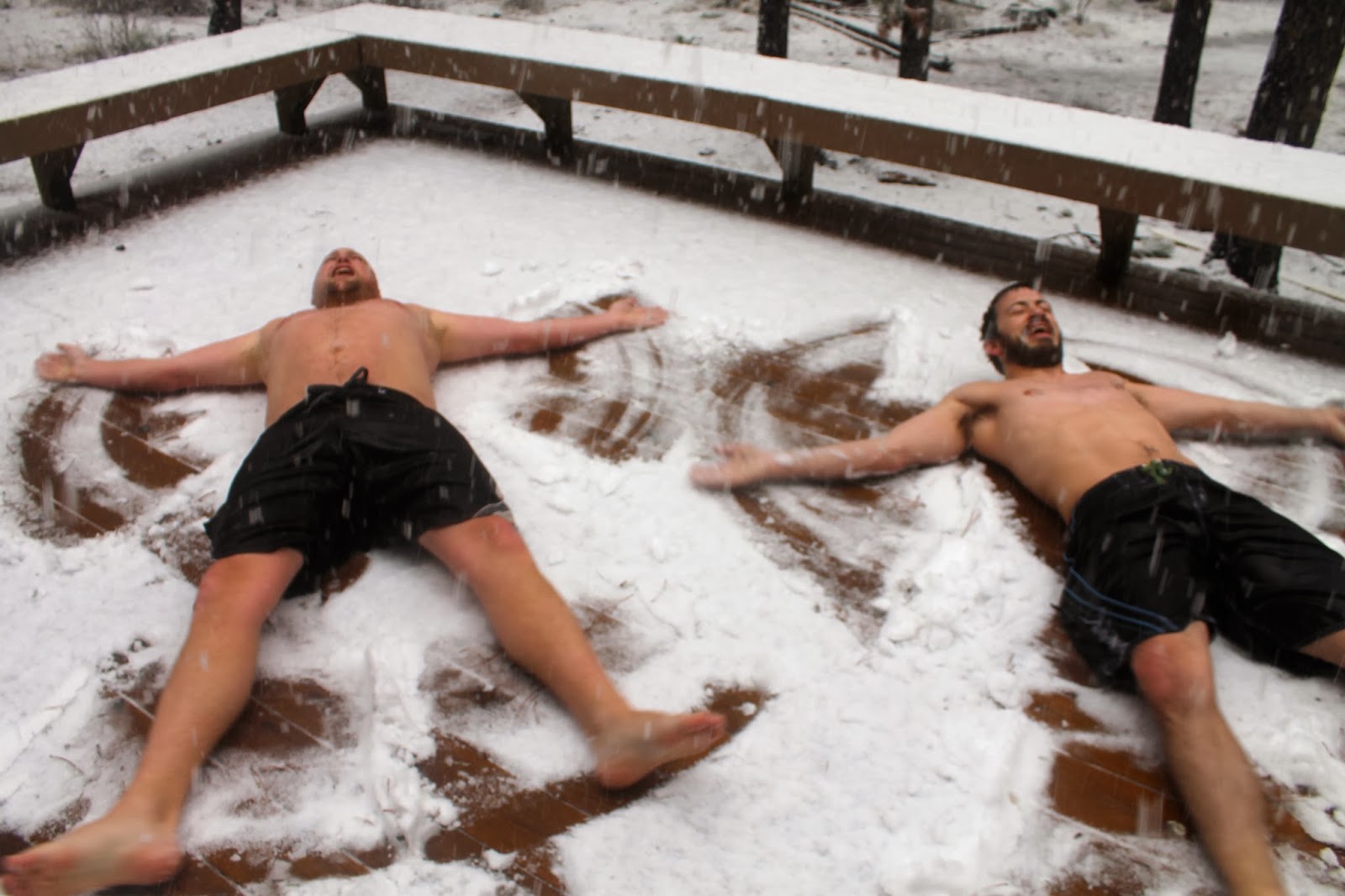 On Sat. night almost everyone went on a snow walk. (Not Eben or I, we stayed indoors and rested. He practically played the Wii the entire time we were there while lying on the couch.) When they got back they all had a snowball fight. 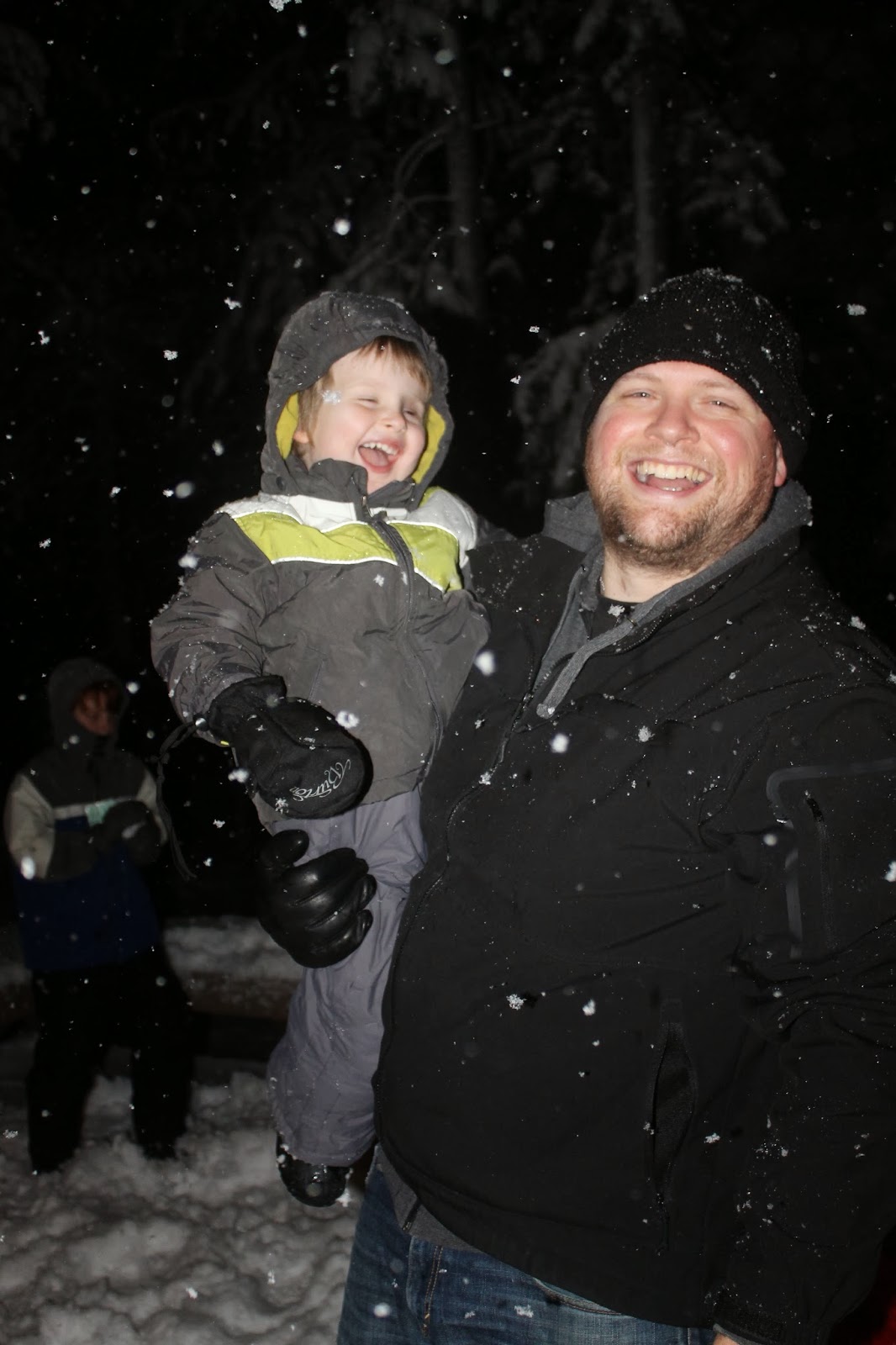 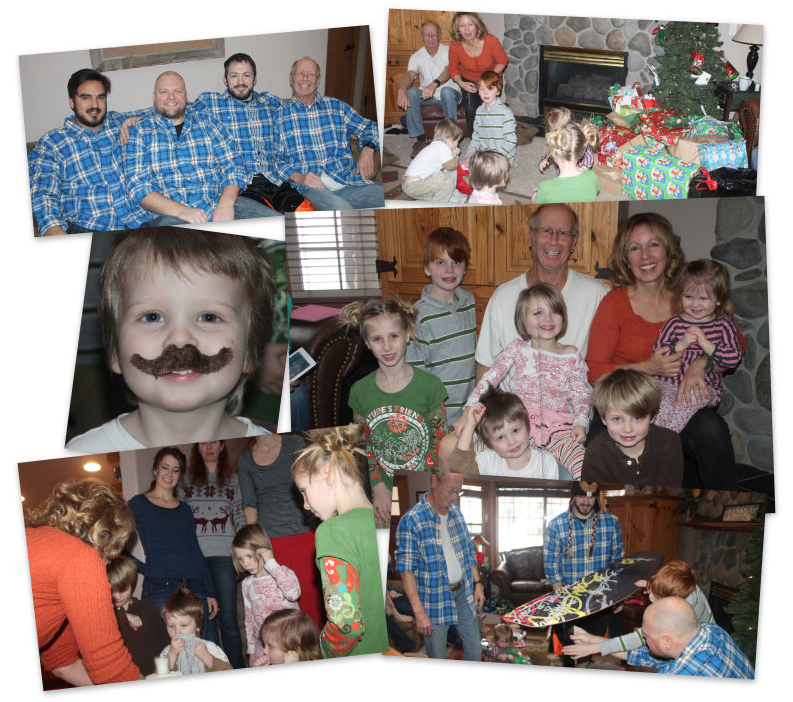 On Sunday we had Bend Christmas since Poppie and Nonnie had Christmas in CA by themselves, we reenacted the Happy Birthday Jesus song, Luke 2, stockings for the kids and LOTS of presents.
After Christmas 2.0, as the kids called it, we started building an igloo. It was a great feat and although we never finished our quest, it was a great beginning. Soon after this more than just Eben and I started feeling sick. Berg, Jasper and Kivi all were acting a bit out of it and super sleepy. 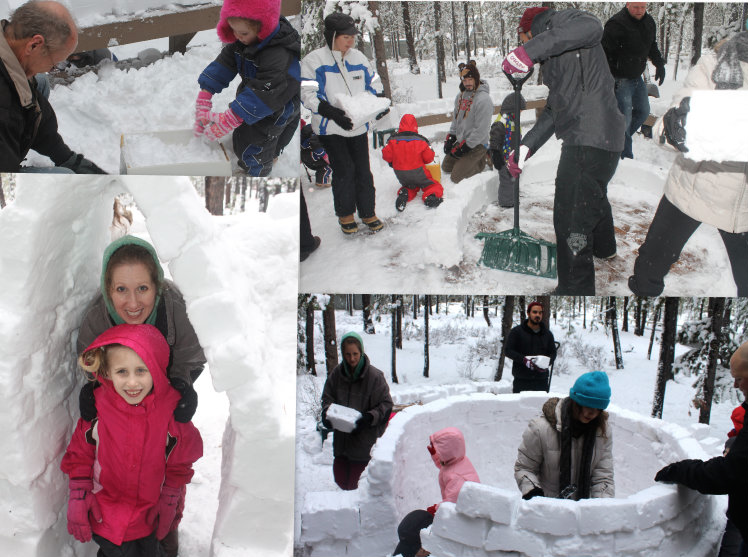 But Pella still loved going on snow walks with Nonnie. That night Peter and Nonnie and Kivi all took a turn for the worse. 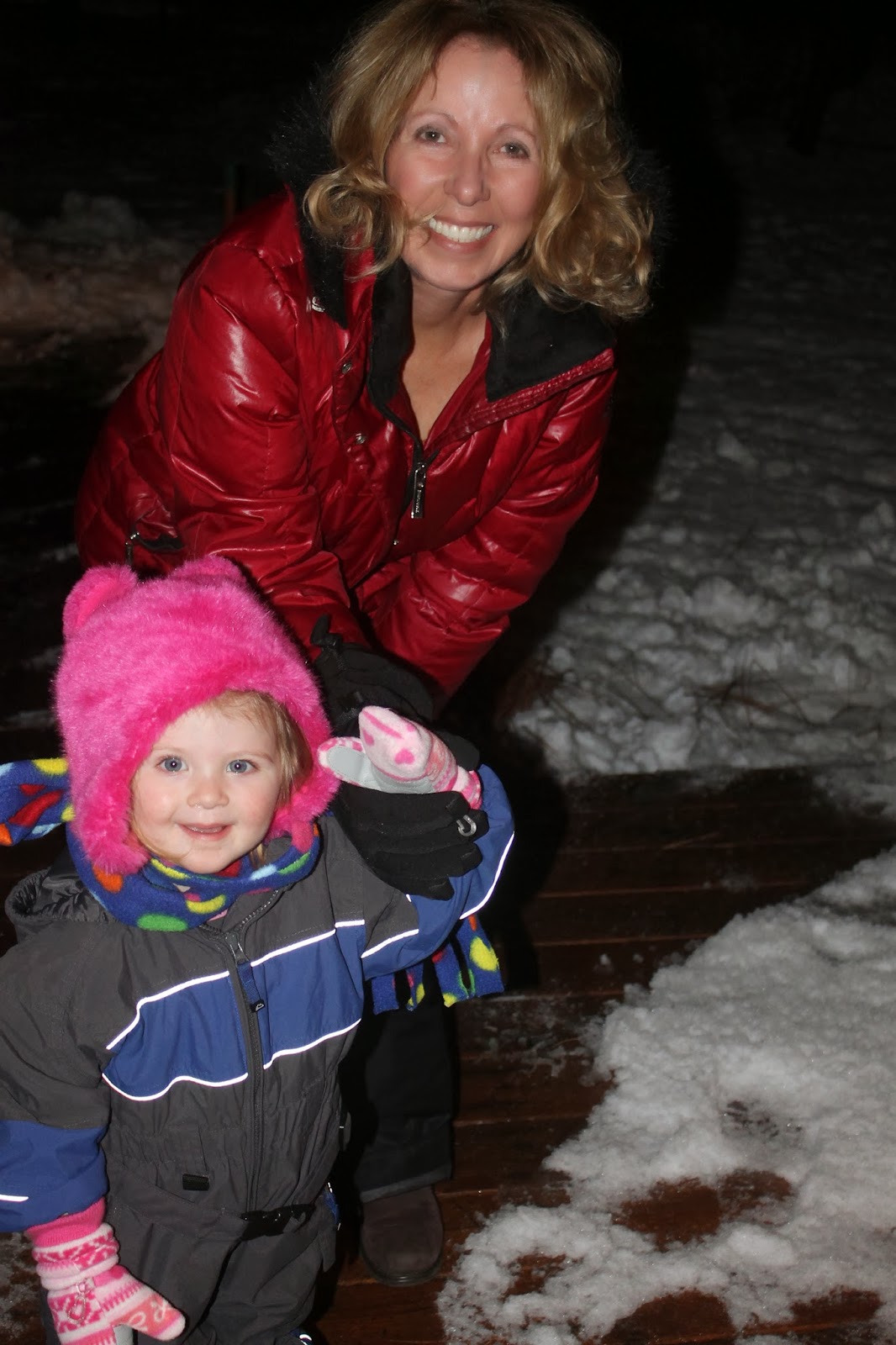 All of the sickies slept almost the entire day while I stayed and watched the kids with Mimi. Mr. Steve, Dodie, Uncle Kookie, Buggy and Poppie left to go to a brewery and shopping all day. I tried to get up enough strength to take the kids on a walk around the little village and build a snowman. That was about the extent of our day. We were done. Early Tuesday Peter called it and we packed up and headed home that morning while everyone else went skiing. The kids were all sick, but so sad to leave. Later poor Uncle Kookie ended up getting sick too. So we really didn't do anyone any favors spreading our disease to everyone. It was too bad, because the house was so beautiful and big and there was so much potential for an amazing time, and while we had a fun time being with everyone, it was a lot of work. Thanks Poppie and Nonnie for the gift and sorry for the horrible "gift" of disease we brought with us. 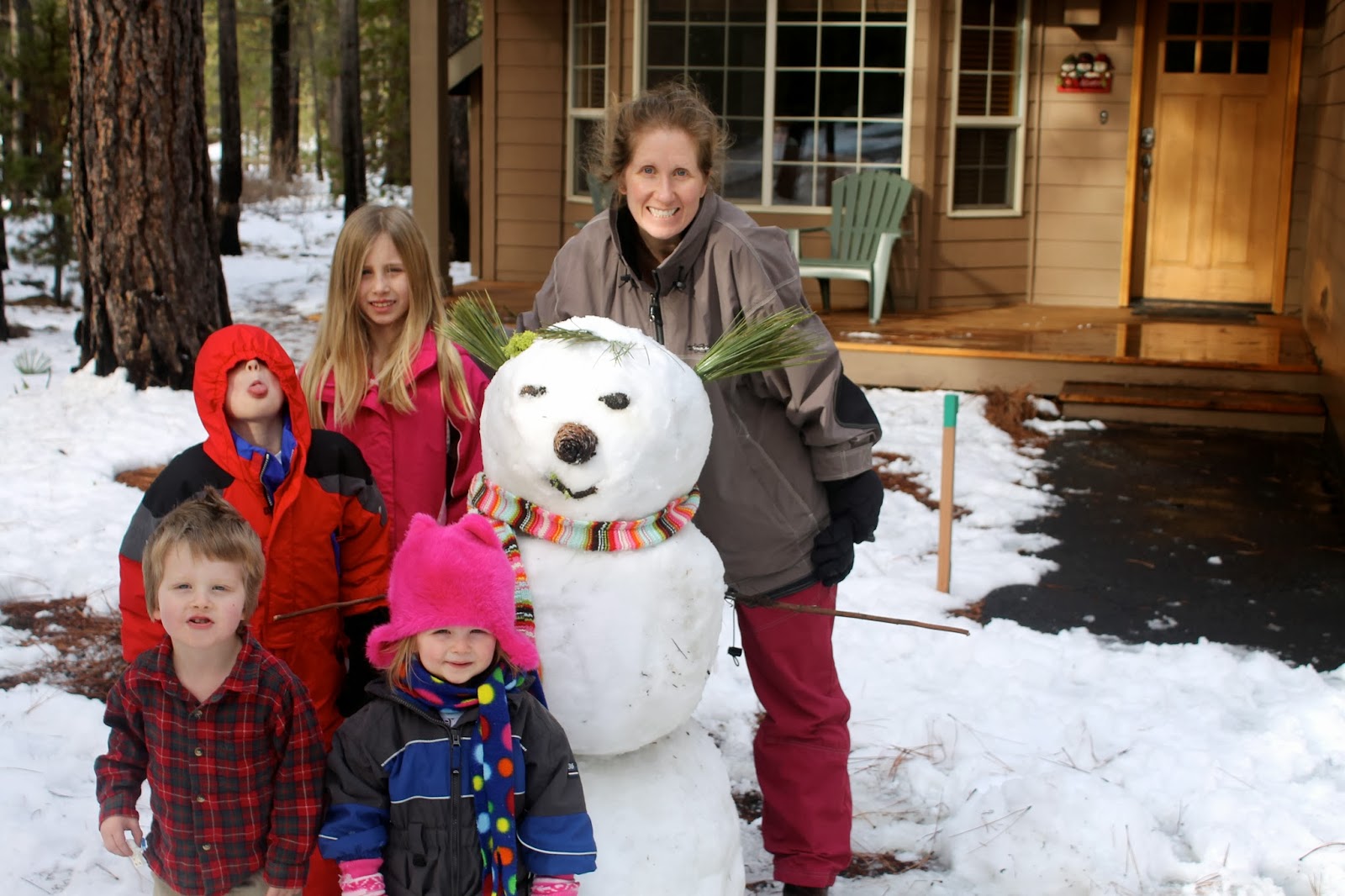