Poppie came at the end of March and along with helping Eben complete his dream of eating worms (see below) he also inspired 3 days of traditional Indian living.  This sounds confusing, I know, but let me explain: First, Poppie went to the pet store and bought some small meal worms, cooked them in butter and garlic with Eben and we ate them! Eben has been asking to do this for a long time, we just never seemed to be able to find any. But thanks to Poppie, Eben can check this off his to do list. 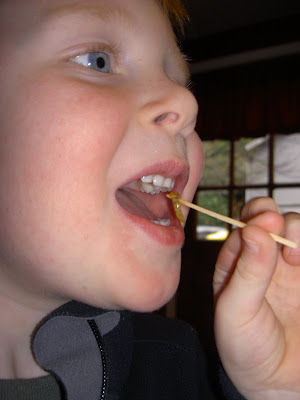 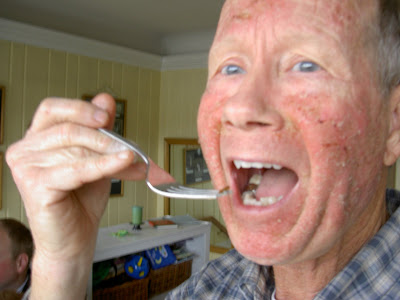 Then, after hearing Poppie's olden day story of how he went to school on Halloween dressed as an authentic Indian (a towel, that was all) our kids were inspired to do the same. Unlike Poppie however, Eben, Kivi and Jasper wore underwear. They put my headbands on their tummies to keep the towels on and wore them for 3 days straight! Even at night under their jammies! They made wigwams all over the house, pretended to fish, hunt with bows and arrows, skinned their kill, made blankets, and did some Indian dancing. Dada even enhanced the outfits on the second day by making them Indian headdresses. 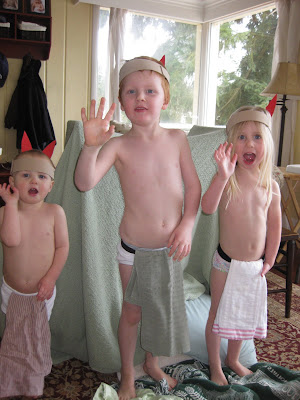 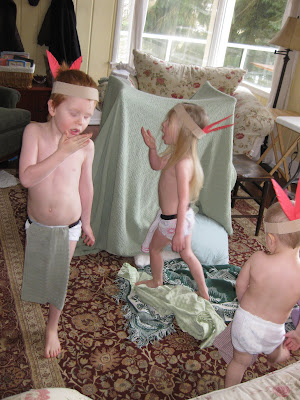 You guys are a RIOT!

ok that worm thing is discusting! The indian's are funny though. Those will be some great blackmail pictures when they're teenagers!

and the worm thing.. have you guys recently read "how to eat fried worms?".. I think by Beverly Cleary... or is this just something he wanted to do? Crazy fun!