We celebrated our third child's third birthday on Sept. 18th with a Robot Party! (He really wanted a jet ski party - but, that would've been pretty boring with a broken jet ski. So we got him to come up with a second option - good thing he's only 3 and easily swayed.) Since we had to change his mind set we started getting really excited about robots way in advance. We helped our kids make robot utensil, plate and food holders for the party and 2 big robots for the table decorations. 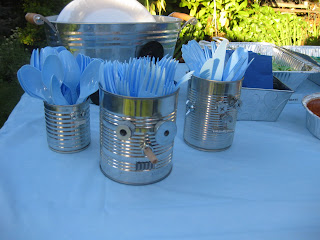 This one is my favorite. They each took turns picking out a random screw/lid/bolt and showing me where they wanted to put it. I put on the hot melt glue and they stuck it on. Kivi wanted to make it a boy robot. Can you guess which piece is her's? She never forgets about those things. Detail oriented, like her mama. 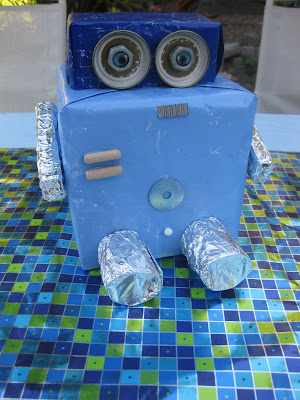 We had such a fun time making robots before the party, that we decided to make it part of the party too. 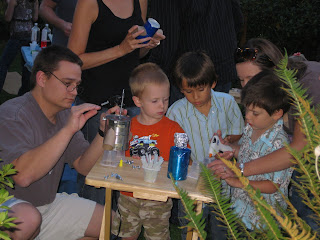 One night after I put Jasper to bed, he started crying like crazy, which is very odd for him. I went in his room to see what was wrong and he cried, "Who's going to make my cake?" I assured him not to worry that I would make it, and he said that he really wanted Mrs. Schock to make his robot cake. What? Seriously, that's what he was screaming, having nightmares about. Oh well, so the next day we called Mrs. Schock and asked if she would make his cake. This actually made things much easier! And Mrs. Schock made a fantastic robot cake that Bubba was super excited about! 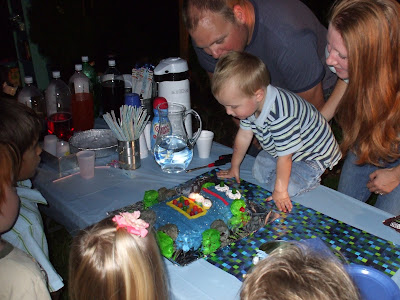 It started getting really dark, so Dada got the flood lights out so we could take a group picture and watch the birthday boy open his gifts. 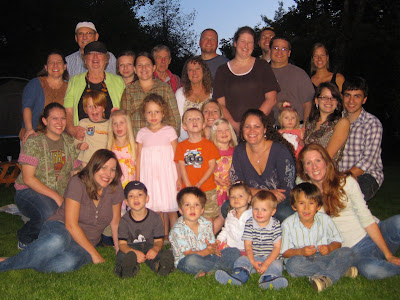 Then we had a short Robot Dance Party! Jasper has the greatest robot dance moves. And that shirt he got from Auntie Tonya - had to wear right away, and if it's clean, you'll see him wearing it any day. 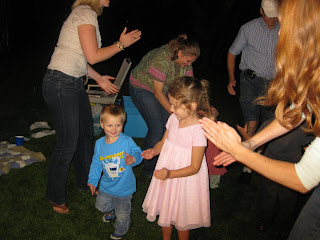 All the kiddos and their finished robot creations. 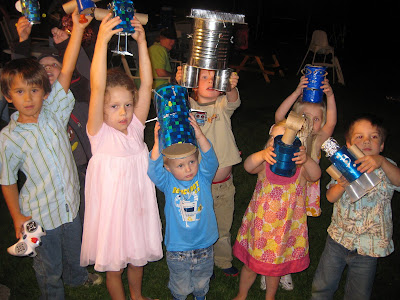 Jasper we love you and your new love of robots! You're such a friendly, outgoing, happy guy! Everything you say is so cute! We can't wait to see how God will use you and the strengths He's given you to change the lives of others! We love you Bubba! Happy Birthday!
Posted by The Johnsons at 1:14 PM

Looks like a great party! I can't believe he's 3 already!

Jasper, it looks you had a great robot party. So glad that even the weather cooperated. Enjoy being 3 - it's my favorite. Love, Nonnie