We attempted to surprise Dada this year for his 37th birthday. He's very hard to trick. The kids did a great job of celebrating him on his actual birthday with signs and banners and a big string maze to follow to presents that we all bought him. I think that threw him off. Then two days later we threw him a surprise party with family friends. My plan was for people to just show up randomly and make some excuse as to why they were there like wanting to swim or borrow a tool, and see how long it took him to realize what was happening. By the time the third family came, he looked in their van window and saw a salad on the wife's lap and said, "Okay, I see what's going on here." Once he figured it out I started setting up the party food. It was actually the easiest party ever because I did nothing before hand so that he wouldn't be suspicious and everyone helped me prepare food and barbecue! The kids all swam. The guys played the new game of Beersbee and then the women tried it. Peter won his match, but I am horrible at throwing a frisbee. Then we all ate key lime pie, Dada's favorite. After everyone left, the Schocks took our kids and I took Peter on an overnight fun trip (thanks to my parents family friends!) to Seattle! We went to some fun restaurants, walked around Pike and the waterfront and even played ping-pong on the pier. Two surprises! Whoo hoo we did it! 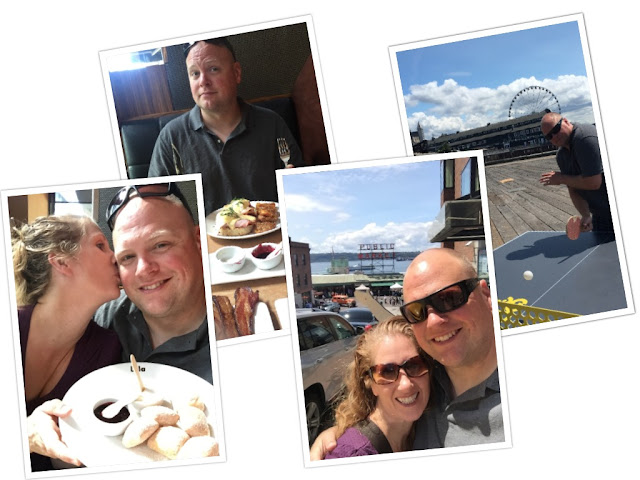