Wed. May 15, 2019
Got to see a beautiful garden that some argue is where Jesus was buried. The hillside does look a lot like a skull where He could have been crucified. Not so much in the picture, but in real life it does. I love gardens anyway so I like to think it was where Jesus was buried. It's easier to imagine Him here instead of the enshrined, overly decorated cathedrals. We had communion together and sang worship songs. I was so happy here. Quite a contradiction from the day before. 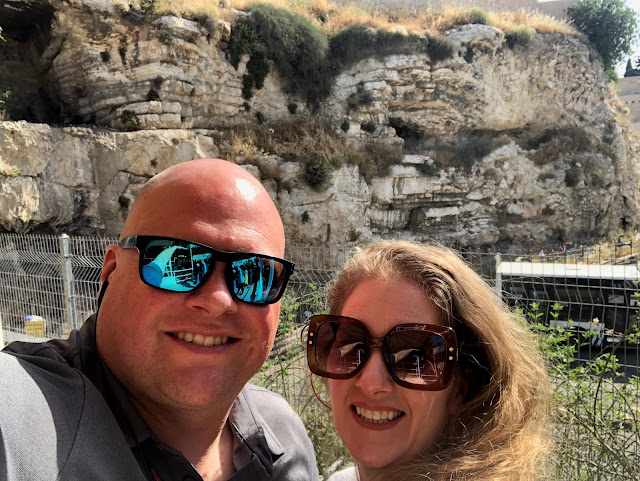 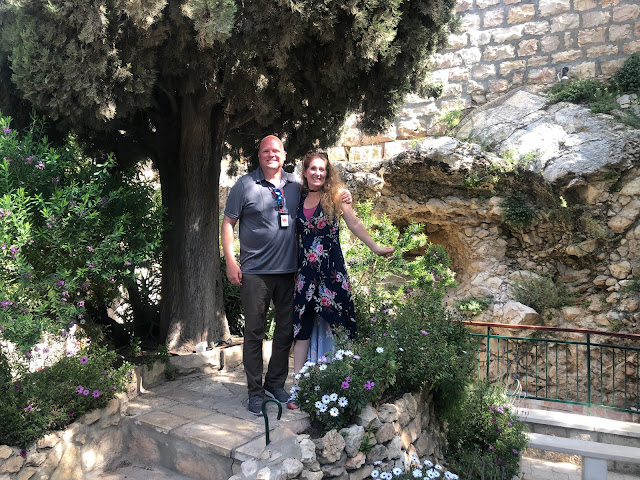 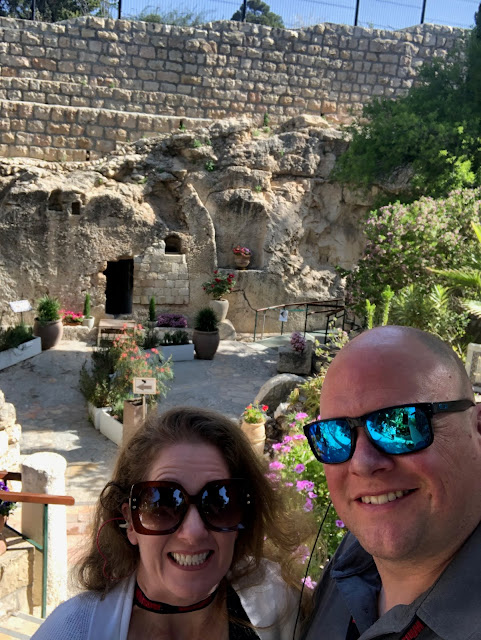 At the Pools of Bethesda and the church of Anna, Mary's mother, we explored all over the ruins and down into caverns. This is where the man was waiting to be lowered into the pools when the angel stirred the water to be healed, but Jesus told him to, "Stand up, take your mat and walk." From there we saw more Roman time stones and a an etching in one of the stones of a game that the soldiers would play with dice to mock those waiting to be crucified along the Via Delarosa. We were all set free for lunch and the Ourys and we followed a man named Abraham, who wanted money, who led us to the Quarter Cafe Restaurant where we had a delicious quiche and wonderful view. 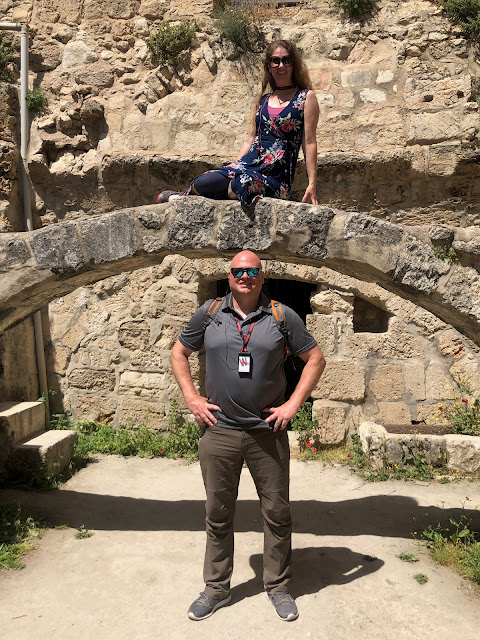 The church of the Holy Sepulchre, where many say that Christ was crucified, wrapped in linen and buried in Joseph's tomb was crazy, crowded and again covered in gaudy gold, curtains, marble and angry priests violently shaking their incense at everyone. Peter's waterbottle dropped out of our backpack pocket and before I could pick it up a very bothered priest swooped in and grabbed it in frustration and ushered it briskly into the wastebasket. People were kissing the Stone of Unction, the place they believed to be where Jesus was laid after being taken off the cross and where they think He was buried there was a long line to get into this tent looking thing, actually a shrine called the Aedicula, in the middle of the cathedral. We didn't go in, but got very mean looks from everyone because they thought we were cutting in line while we were trying to just get through to the other side. These are the steps outside the Holy Sepulchre, which is shared by many different Christian denominations and who argue about how to maintain it. 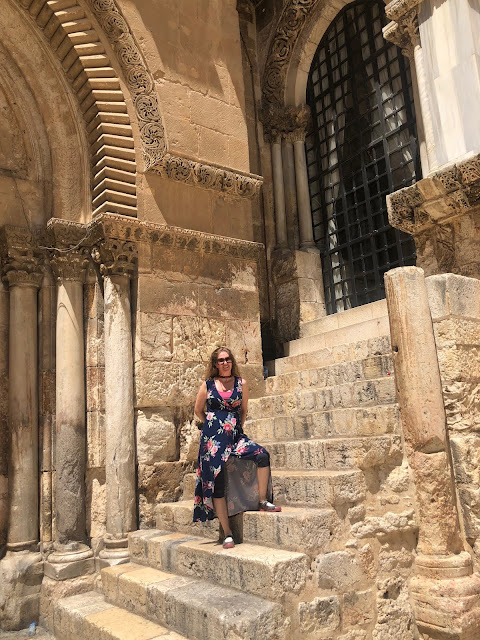 The bus took us to the Mt of Olives, which is now a bunch of tombs of Jews who wanted to be buried there so they will be ready & the first to be resurrected they believe because of their placement in Jerusalem. We walked from there down the Palm Sunday Path to the Garden of Gathsemene. 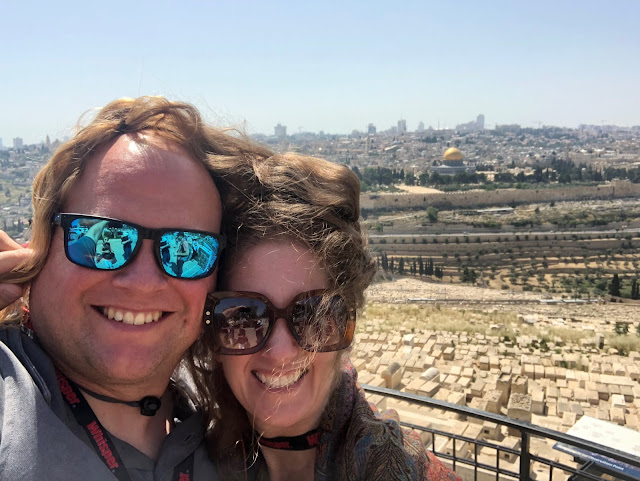 That is where I met the gardener, who gave me branches from the over 2,000-year-old olive tree that he believes makes a healing tea. He waited to give them to me until everyone else went into the chapel because of course there is a chapel there!! 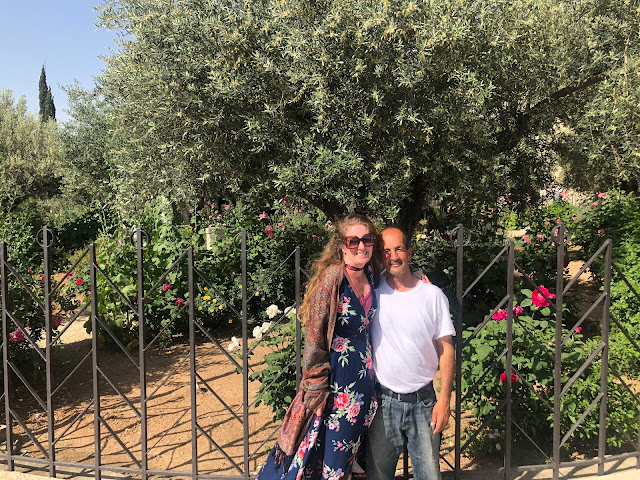 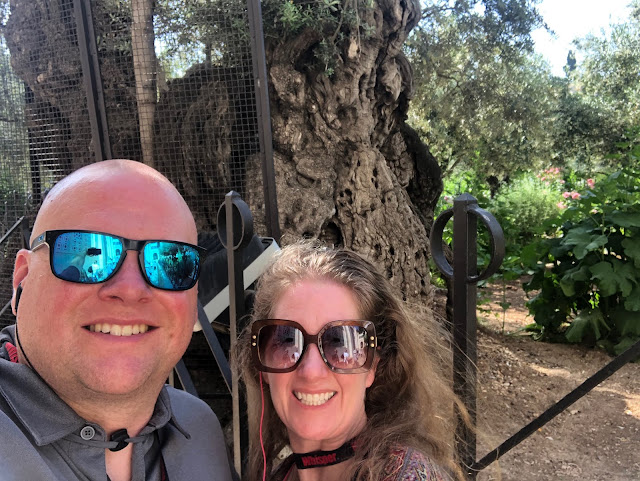 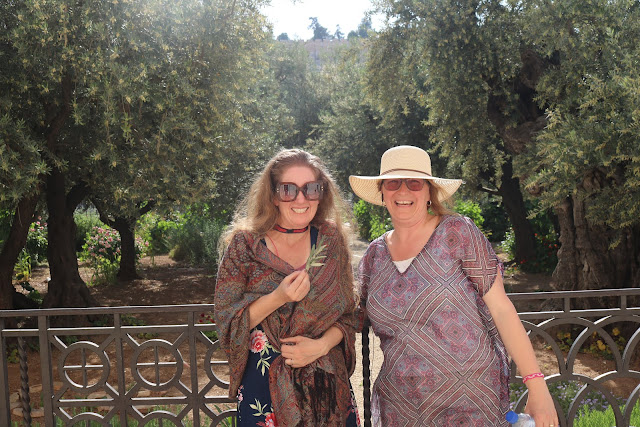 We had dinner at the hotel. 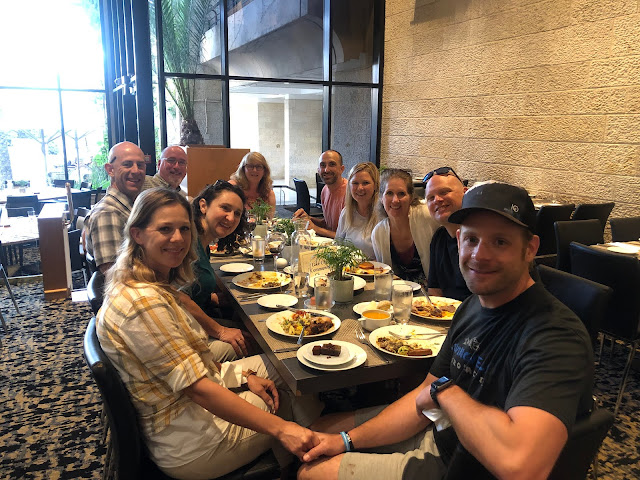 That night we took the city bus to the city center and had coffee and met a Jewish family that we talked to for an hour. We walked back to the Tower of David and went to see a light and sound show that was projected on the walls of the tower. 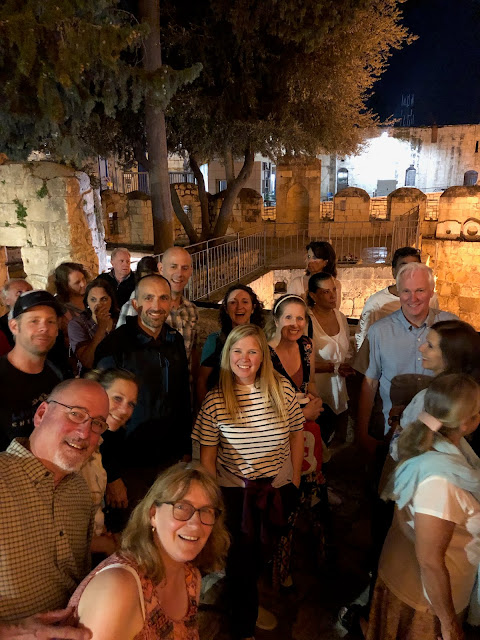