Our 2010 has already been filled with excitement! Grandma and Grandpa took our whole family on a trip to Westport to start off the year. We were there from Dec. 27 - Jan 2 and had a great relaxing time. The kids could've stayed there forever running back and forth down the long hallway, going in the hot tub every day, playing Wii and taking beach walks with Grandma and Grandpa. I stayed in the house the entire time! - Except for going on a movie date with my hottie. I never even saw the beach - It was cold! And I was determined to start and finish a crochet blanket for some reason. 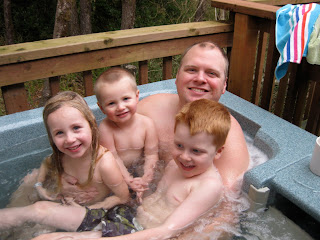 On Jan. 4th we got our much anticipated first foster baby! He is such a cutie! We'll have him for at least 3 months and he's a great little man. He's only a month younger than Opal so whenever we go out everyone asks if they're twins.

The kids devoured the gingerbread houses! It's really the part they look forward to as soon as we make them, but we save them for so long, that by the time we eat them, you can hardly get any candy to pry free. This year, however, they were creative and completely destroyed and ate the whole house - gingerbread and all! 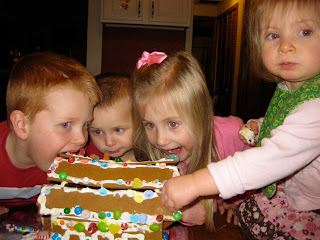 Hawaii!!!
First of all, I must say, God is amazing!!
The back story: I have been doing a study where I pray for my marriage and my husband and really work at being a non-selfish, Christ-honoring wife. I still have very far to go! One of the challenges was to think of what your husband has always wanted to do, then pray and try to make it happen for him. So on Dec. 10th, I started praying that somehow we would be able to go to Hawaii - something I knew Peter had always wanted to do.
On Dec. 23rd, our friend asks if we want airline tickets that had to be booked by Dec. 31!!! Of course we said, "Yes!" Our whole trip was a series of blessings; we got the last seats on a flight to Maui, we got a great car rental deal by just asking in person, way cheaper than if we had booked it online, and our hotel/B & B's kept getting cheaper and nicer the longer we stayed!

The first day we had some amazing, pork filled Hawaiian food, then found a hotel in Kihei. Actually, at the first place we stopped all these older men in speedos kept looking at Peter funny as he tried to find the office. Peter came back and said that he decided not to even go into the office because he was getting "kind of a weird vibe from the place." I later read in our Maui book that this place was, "recommended for the gay and lesbian crowd" Ha!! So we kept going and found a great hotel on the beach.

The second day we decided to do the Road to Hana. First we had a great breakfast - eggs and fried rice (Peter's new favorite) and coconut and pineapple french toast. Then we bought some cheese, crackers and salami for lunch on the way and hit the road-six hours of winding one lane sea cliff road. It was gorgeous! I probably would've enjoyed it more if I didn't try to read about what we were seeing and driving at the same time. Our little book helped us find what a lot of other people missed on the drive, like the cool Twin Falls that were freezing cold, but had a rope swing, so Peter dove in. 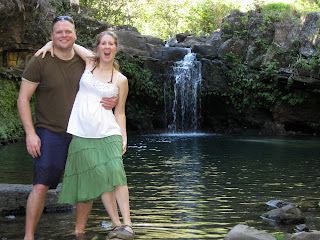 On the Road to Hana - one of the little falls.

Peter on the rope swing at the Twin Falls. 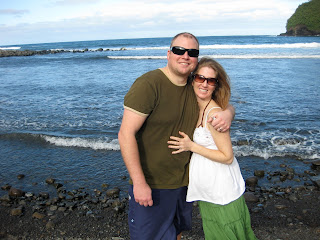 One of the black sand beaches you could drive down to on the Road to Hana. We were going to stay overnight in Hana, but ditched that plan when we found out that the resort out there was about $600 a night. We drove back into town and stayed in Wailuku at a Bed and Breakfast. We got the last empty room! And it was beautiful! Complete with a 6 headed shower the size of a small room.
The innkeeper recommended a small Vietnamese restaurant for dinner, and we tried out the Pan Pacific version of fondue. As we cooked our squid at the table, Peter looked at me and said "Clint Eastwood is behind you." Thinking he meant on tv or a poster, I was surprised to find that the actor was indeed standing directly behind me waiting for a table. Not bad for a rundown Asian hole in the wall tucked under the freeway!

The third day we headed over to Lahaina, picked up some snorkel gear and went up to Napili to do some snorkeling. I even got in the water and tried it! We saw some amazing fish and coral and enormous humpback whales from the shore. That night we stayed in Kaanapali in a luxurious condo for only $100 a night! It was so nice we decided to stay there the rest of our trip. 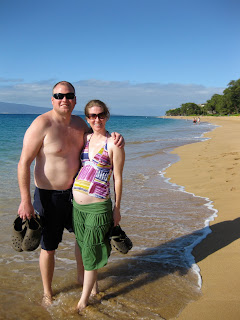 The beach our condo was on. 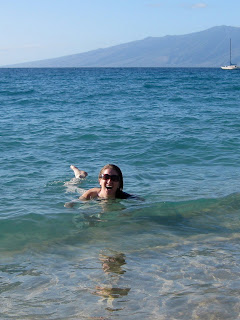 I got in the ocean a total of 4 times which is very amazing! I don't like water... or sand. This trip really was for Peter, but I wanted to do stuff with him - so I forced myself to go in.

The fourth day, we went on a snorkeling boat trip. First we headed out to the Molokini crater - which is half underwater. The boat served us breakfast and then they took us to another location to see some sea turtles and have lunch. Then we chased down some whales just for fun. It really was a fun day, even though I was scared to death at first. 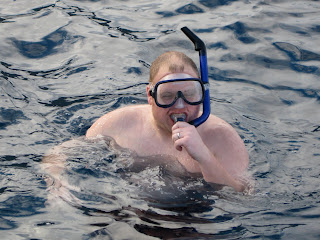 The fifth day, we walked out to the beach with our snorkel gear and down to a place called Black Rock where we did some more snorkeling and saw some more turtles. Just as I put my head in the water, one of the turtles ran right into me - which scared me so bad I screamed through my snorkel tube. I think I scared him even more cause he took off. I felt so bad, the big snorkeling rule is not to touch the turtles - I hope my sunscreen didn't endanger him! Poor turtle - he's probably having nightmares about me! After snorkeling, we had crepes for breakfast! Then we spent the rest of the day napping, watching TLC!!, and swimming in the pool. Every night after I fell asleep, Peter would go for a beach walk and look at the stars.

Day six - we had to go home! We got more crepes for breakfast and then headed to the airport. And because God is so good - we were the last ones to get on our flight back to Seattle! We both feel so excited and giddy to have been able to go on this spontaneous trip. It was so relaxing and beautiful, and helped us both remember just how much our God takes care of us - even in the little details of life.

Thank you so much Grandma and Grandpa, Uncle Tonya, Miss Kim and Mr. Joe, and Wendy - for everything! We love you!

We went to a candlelight service at Lake City Community Church this year. It was beautiful and fun to include our kids in the lighting of the candles and the symbolic passing on of Jesus' love and the Good News about Him to others. 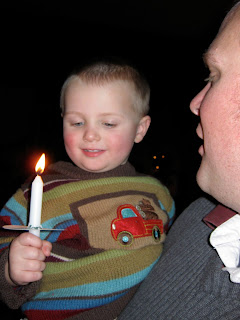 After the service we went home and opened our traditional white present with the gold bow which always contains our matching Christmas jammies. Eben had it figured out, but to the rest it was a surprise. We spread the matching tradition to Grandma, Grandpa and cousins this year and made them all wear the matching attire the next day at our house. 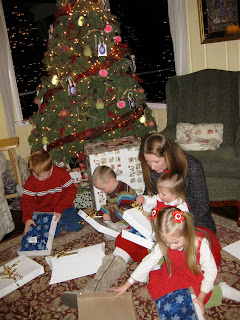 Every Christmas we have the same traditions to follow. Peter calls me the director, because I tell everyone what to do and when. And Peter is the producer, because he does everything to make Christmas happen. He does the stockings, all the Christmas buying and wrapping, makes the Christmas breakfast and the meal, lights the fires, turns on the tree, gets the cake ready with candles. And then he lets me and kids enjoy it all. I really love him! He loves to see people relax and have fun. I really appreciate all that he does on our family's most anticipated birthday of the year. 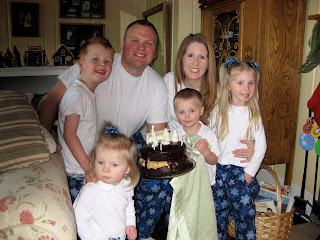 My mentor mom from Mops made us a beautiful chocolate peanut butter mousse cake for Jesus' birthday cake this year. And we successfully made the nativity for the top out of white chocolate without destroying 3 microwaves like last year! Hurray! 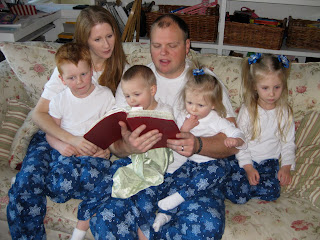 After we sing "Happy Birthday" to Jesus and blow out the candles, Dada reads the story of Luke 2 from the Bible. 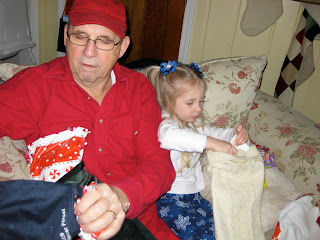 Then we open stockings. Grandma and Grandpa get one too. 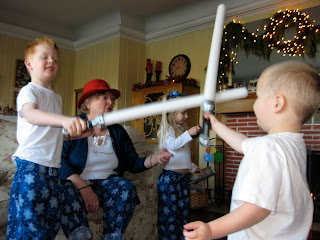 This year the kids all went shopping for each other. Peter took them all on their own separate trips to the Dollar Tree and they picked out whatever they wanted for each other and me. Kivi bought the boys light saber swords which were a big hit. Besides the kid's gifts to each other they opened lots of presents from Mimi and grandparents. I got Peter a griddle, which he's been begging for, and he got me a whole set of new stainless steel pots and pans! 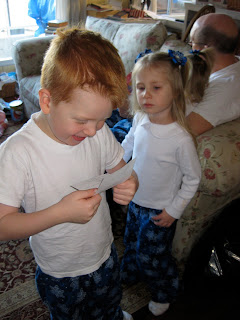 After all of the unwrapping, Dada sends us on our traditional scavenger hunt around the house to find clues and finally our "big present". This was the first year I knew what it was. We splurged and got the whole family a YMCA membership. We are very excited to use this, and hopefully it works out for us. It's been very confusing so far! 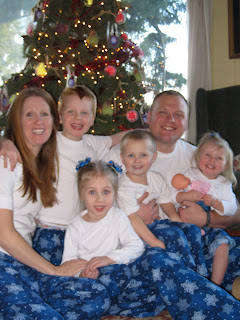 Our family pic with our matching jammies. 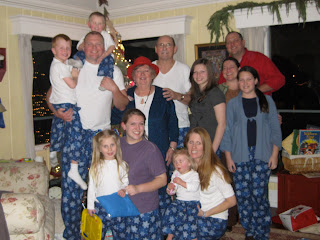 Uncle Chris and, as Jasper says, "Uncle Tonya" and cousins come over for lunch/dinner and we all open more gifts, eat Dada's delicious turkey dinner and play with our new toys. 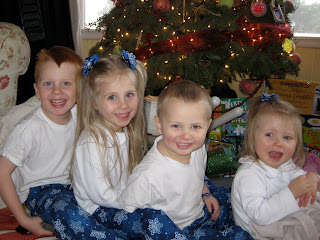 One more picture. That's all.