Right after Opal's birthday party, we left with Poppie and Nonnie to go skiing at Snoqualmie. This cute little mountain has about 5 lifts. (I think you can see all of them in this first picture.) It's perfect for beginners. Both Eben and Kivi tried skiing and, thanks to a nice lady and her 2 year old grandson, they both tried snowboarding, too. Eben had a timid first couple of runs and stayed safely between Nonnie's skis. Kivi had no fear, and her little nervous giggle was so hilarious! After Eben found out that Kivi had made it down the run all by herself, he decided he couldn't let his little sister outdo him and got tough. By the end of the night, both of them were going down by themselves and doing "pizza" (snowplow) like champs. 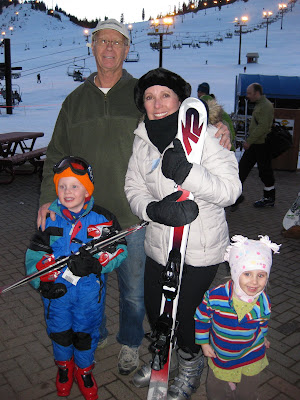 Eben, Poppie, Nonnie and Kivi ready to go down the mountain. 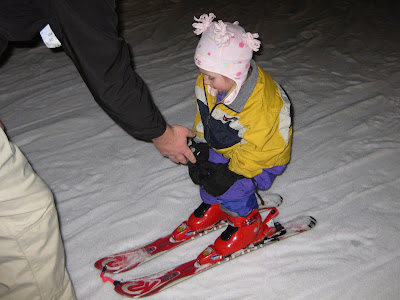 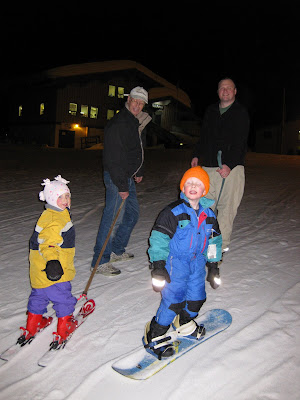 We used a leash and Poppie's belt to tow them back and forth from the lodge to the little "magic carpet" lift. 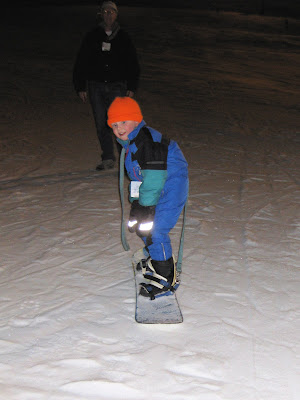 Skiing videos! The first features"The Kivi Wiggle", which is how she started! It was so funny (then she crashes). The next is of her laughing as she's boogying down the mountain. The last one is of Eben "The greatest skier ever!"
Posted by The Johnsons at 9:58 AM

This looks so so fun! I miss skiing and thought that the girlies were too young... I guess you showed me that they aren't! Great pictures!