On Sunday, December 6th, the Lakewood officers and their families were allowed to view the caskets. We took the kids with us, because they had been asking a lot of questions about "Dada's friends". We were the only ones in the viewing room besides the honor guard. We explained who was under each flag to the kids. Peter later wished we had gotten a picture of the four caskets in the viewing room. It was sad, beautiful and surreal.
The attendants at the refreshment room were so excited to give the kids cookies and hot cocoa. I'm sure the only takers of sweets for the day. I could tell the kids were confused at how to eat a cookie without being overly happy and giddy. They knew this was a sad time for Dada, but they were being showered with treats. Afterward, we went to the police station for dinner. So many people have been so kind and donating food to the station non-stop. Then the kids went out front to the memorial that had been growing by the hour to give Mr. Greg, Miss Tina, Mr. Ronnie and Mr. Mark the pictures they had drawn for them. 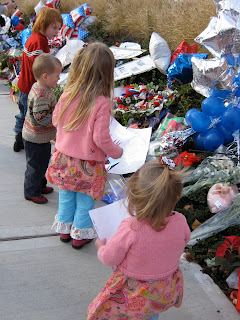 Of all our kids, Kivi has definitely been the most affected. She asked questions non-stop about the shooting, the people involved, why everyone wants to show so much love, about the families, and all about Dada's friends. She could point to each officer and tell you who's who. I wrote down one little conversation because it was so cute:
Kivi: I hope all of those police officers are in heaven.
Mama: I hope so too. I hope they all knew Jesus.
Kivi: Mama, all police officers know Jesus!

Our day started at 7:00am when we dropped the kids of at Auntie Tonya's. Then we headed back to the station and had breakfast with all the other officers and their spouses. The procession started when the hearses came and drove through the lines of saluting Lakewood officers. The family limos followed, then we got in our cars, lights flashing and followed. 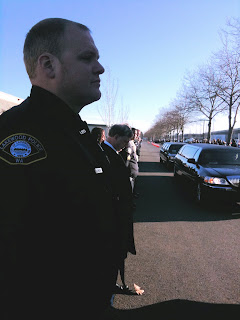 Here is Peter's car going by the station about to drive under the giant flag. 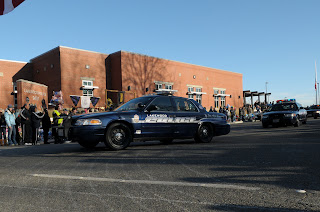 The video I took as we started the procession going past the police station.

We were about the 15th Lakewood police car back from the family cars. I had no idea how affected I would be by this procession. I figured we would drive to the Tacoma Dome in a long line, park and go in. I was blown away by the amount of people who had come out in the freezing cold to show their love and support. Holding signs, holding flags, some saluting, some with their hands over their hearts, some crying. So many people. And we were going so slow that we were able to look them in the eye and nod to each other. A reciprocal thank you. The people I remember the most were a little girl with a sign bigger than herself that read, "HUGS" and a little Asian woman down on her knees, arms held high, holding a flag in each hand, tears streaming down her cheeks. I cried the entire drive. 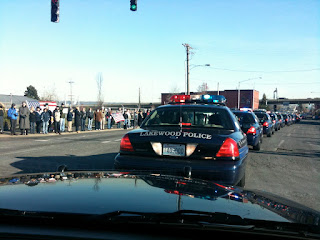 The amount of people already at the Tacoma Dome was overwhelming as well. Everything was done with such precision, silence and an honoring slowness. Here the pallbearers are preparing to take the caskets out of the hearses. The families were escorted in. Then all the Lakewood officers and spouses went in. There were three rooms set up with refreshments. A room for the families, the Lakewood officers and the honor guard. And the Forza girls who had been in the coffee shop were there serving coffee to us. (If you look at the top of the buildings you can see snipers. They were everywhere.) 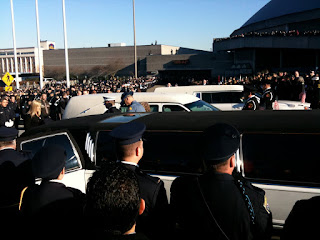 This picture is so beautiful. It's when the bagpipes are playing and coming down the isle. Peter and I are in the bottom right corner. Bagpipes stir something in you.

The whole service was done well. It started late, because the procession was so long, over 2,000 cars, and everyone in the procession wasn't even able to attend at the Tacoma Dome. They had to start the service even though the procession was still going. There were long pauses between speakers, which I appreciated, because it gave us more time to focus on the ones we were honoring that day. We had nowhere to go. This whole day was set aside for them. The most memorable speech for everyone, I'm sure, was Greg's kids. I was also amazed at how much Christ and His love, comfort, protection, and sacrifice was mentioned. I really wasn't expecting that at all. Lakewood's Chaplin, Alve, even gave a challenge to everyone there to find out more about Christ and accept Him into their lives!
It was a humbling, amazing experience that I was honored to be able to attend and hope to never have to again.
After the service, we joined the procession going back to the Lakewood station and then to the reception at Farrelli's in Dupont for all the Lakewood officers. Instead of going to a second reception at the casino,we headed home at 12:30am. A long day, a good day, a sad day, a day of honor and respect. A much needed way to remember and say goodbye.
Posted by The Johnsons at 9:53 AM

Amber - that is amazing - I'm wiping the tears as I write. Your family is in my prayers!!

Thanks for sharing that with us Amber and Peter. My heart goes out to you guys as you wrestle with such tragedy so close to you. You guys are a beautiful picture of the body of Christ and I know your presence will bring comfort to the families. I pray God is glorified somehow in this unspeakable sorrow. Much love to you guys,
Tiff

Amber, thank you so much for sharing this with us. It sounds like it was a very memorable day that no one will ever forget. We continue to pray for the all 4 families as well as the current Lakewood officers.

this is an amazing recount of the day Amber and I am so glad you wrote it. It will be a great way to remember the details of the day in years to come. You guys are in our prayers and I am so glad that Allen could be a good friend to Peter through all of this. We love you guys.