First of all, Easter was great, but strange. Peter worked on Easter Sunday so we went to Saturday night service - like we usually do, but for some reason, it felt weird. We put on our "oh so cute" Easter outfits right before church at 6pm and then promptly exchanged them for jammies when we got home. And Sunday was a no biggie day except for looking for the baskets, inside because of the rain. Oh well. God was glorified, it was just different. Peter and I did get to have tiny little parts in the Lake City Easter video that Pastor Jim worked into the sermon. So that was fun! You can see it at http://www.youtube.com/watch?v=hrXs5HiYmC0
The day after Easter my Aunt Sherri came up from CA to stay with the kids while Peter and I headed out to Washington D.C.! Well, that was the plan anyway. It didn't quite work that way. My aunt came on Monday and stayed with the kids and that part went perfectly! She did an amazing job with them and even tackled Super Buffet with all of them by herself! She sent us updates everyday via email which I'll put at the end.
What really happened was this, we had standby tickets from our wonderful friend Wendy!! We were so excited to use them and booked flights to our nation's capital. But while I was at our church's women's retreat (an awesome time!!) Peter missed his little window of booking our flight back, so he bought hard tickets instead. No problem. However, when we arrived at the airport, which we headed for after only 10 minutes of my Aunt Sherri arriving and after both of us verbally abusing her with instruction after instruction while giving her a whirlwind tour, we realized there were NO flights open to get on out to the east coast. Since we had hard tickets back we had to get to D.C. or pay an enormous fee to change our flights. Finally, we found one - to Orlando! A red-eye. So we jumped on it and after the most uncomfortable flight either one of us has ever had (Don't pick the emergency exit row with the seats that don't recline on a red-eye!) we made it to FL at 7am on Tues. neither of us having slept a wink. We didn't care though, we were still happy to have a fun get-a-way! We found a rental car and started driving up the East Coast! The good part about this is that in only one day we were able to cross four states off of "our list" that we made when we were on our honeymoon. So we made it to our destination, our friends the Dennis', after a short visit with Peter's college roommate, Wenzel, around midnight! Needless to say, after no sleep for 2 days, we slept in longer than we meant to on Wed. When we did get a start on the day our most hospitable friends supplied us with not only a place to stay but snacks and a car too! We drove into D.C. and started to see the sights! 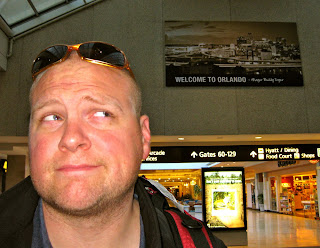 The first thing we did was tour the Capital building, well, after 1/2 an hour of trying to return the rental car and then finding a parking spot. It was so beautiful! Peter had called ahead and booked a tour through our Senator's office, so we were able to go right past the multitudes standing in line for a tour guide and headsets. (Yes, we went to D.C. during Spring Break - we didn't think of that either. - Everywhere we went was packed with middle schoolers!)
Some advice for parents of middle schoolers - don't waste your money sending your kid, who won't appreciate, it a trip to D.C. - all they are going to do is talk about the boy/girl who is looking at them and try to throw gum in a senator's chair. Wait and send them when they are 20 or 30.
This is the very center of the capital building- and of D.C. Underneath is an empty tomb - oooooOOOOOhhhhhh (a scary sound). 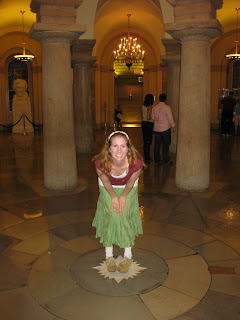 The backside of the capital building - it was way less crowded than the front! 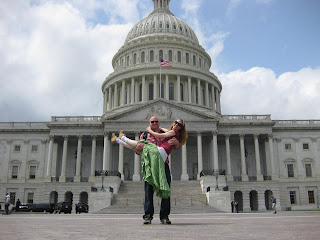 After the capital, we strolled down the mall popping into a couple of the Smithsonians, the National Gallery of Art, which I loved, and the National Museum of Natural History, which I did not. Well, we only got to see the dinosaurs-yuck!- and the rocks and gems - which were cool, but at that time we were both so tired everything was blurring together. That's also when I had my meltdown. I was so excited to be there and so sad because there was no way on earth we we going to get to see even a snippet of the amazing things D.C. had to offer. 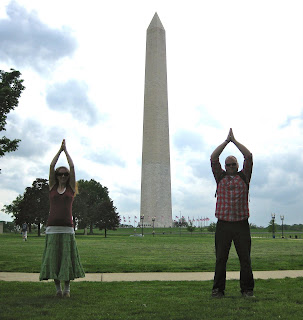 After the Washington Monument, Peter dragged me to a late, late lunch, early dinner against my will, because I wanted to be out there seeing "stuff" even though I had no energy. We ate and sat for a while - which was good. I needed rest, it was a long walk and French onion soup always makes me happy. And decided to not be sad, and be happy for what we did get to see. Which ended up being a lot for 2 days. We saw most all of the monuments and memorials, the White House: 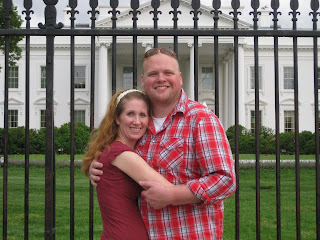 and ended our stroll down the mall at the Lincoln Memorial, which was swarmed with middle schoolers, at 10:30pm. It was a memorable day. Then it started down pouring and we caught a cab back to our car.
The next day, we headed to Mount Vernon. I thought this would be about a 20 minute little visit and then we'd be back to see some more Smithsonian museums. I loved it! We ended up staying for 6 hours. Peter knew I'd love it. There was so much to see, and I could see it - all. And I did. I felt like I accomplished something great. I love George Washington now. 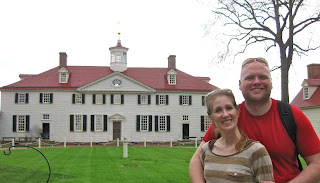 you were soooo close and didn't pop in to visit us? for shame..... :( no really, just joking. so glad you two got a vacation. and looks like you enjoyed yourselves. not sure we will make it to WA DC not sure we really want to with the way our current government. that is just too squeaky close to me. LOL

By using Car Rental 8 you can discover the most affordable car hires from over 50,000 locations globally.