Kivi came up with a super cool theme this year for her 6th birthday: 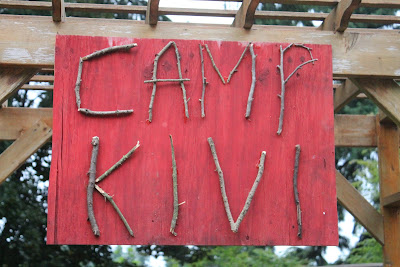 And she knew exactly how she wanted her cake to look too! The campfire looked so cool when we lit the candles that were in it.

We set up a s'more table, with all sorts of options, from mint chocolate or coconut marshmallows to already made in the package ones which we called "Lazy Man S'mores". 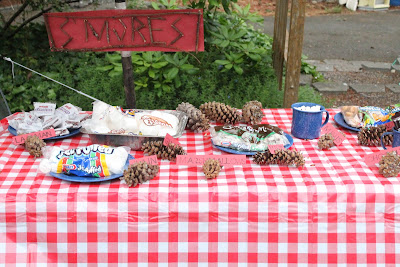 Between us and the Schocks we were able to cover our yard with four tents. We put a campfire in the middle of the yard and camp chairs all around it. 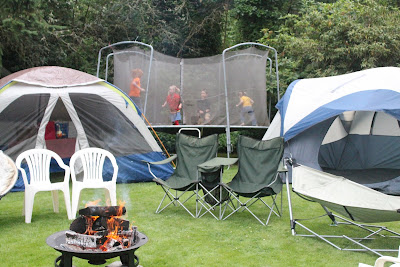 After the kids played a "get the bugs out of your tent" game, they made their own trail mix for part of their take home treat. It was all sugar cereals and dried fruit. Yum. My kind of trail mix. 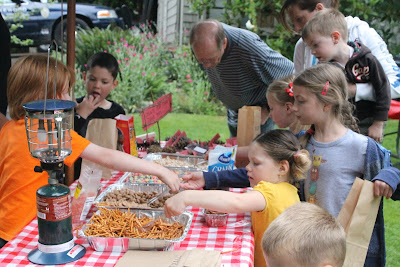 Then it did what always happens when you go camping in the state of WA - it down poured! Big time rain. Good thing we had all those tents for people to go into. And Peter got tarps and covered all the cute tables previously mentioned. It looked like tarp city. Unfortunately dinner was a make your own foil wrap deal, so we all had to brave the wetness, choose our own ingredient to put in the foil and stick them into the fire. They turned out amazing despite the waiting for them to cook while we huddled under tarps. 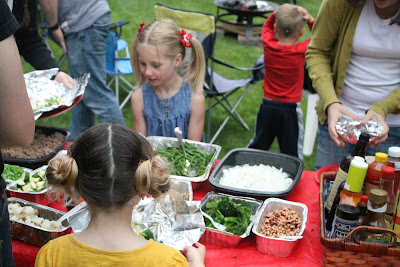 It stopped raining long enough for us to get a group shot and then it started again. 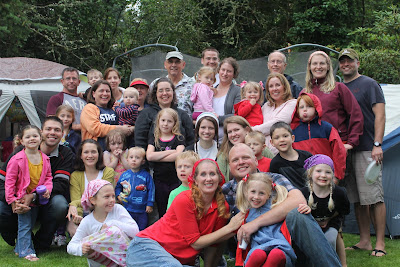 So Peter and the guys carried the tables under the deck and we continued the party there with birthday cake, ice cream and present time while the kids decorated their own tent broom and dust pan. 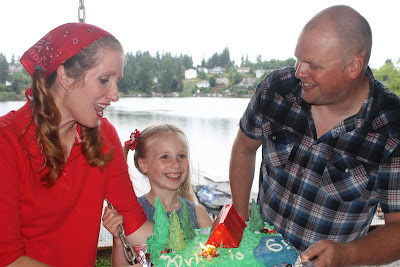 We got Kivi the American Girl doll, Kirsten. It was the first American Girl series she read and she fell in love with her. I searched for her forever on ebay, because she's a retired doll and found one finally! Peter says I was obsessed and he's probably right, but Kivi loved her! 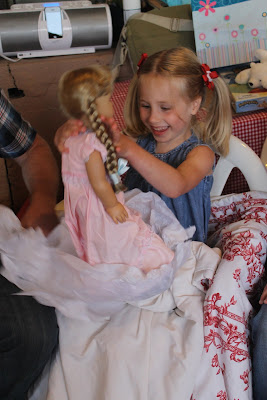 The rain let up again, so we hiked back over to the camping area for some after dessert dessert - s'mores! Most of the kids opted for the giant marshmallows. 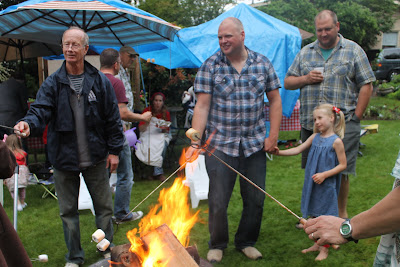 It might have rained, but we still had a great time "camping" with our Kivi girl and our friends. And she had a great day! 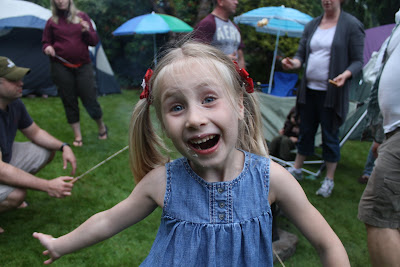 We love you, Kivi Pea! You are such a delight to be around! You are always helping and serving our family. You're joyful and full of life. You are hilarious and come up with the funniest stuff. You are talkative, smart and competitive, kind and thoughtful toward others. You are definitely becoming an awesome woman of God already. We are so blessed to have you as a daughter. Happy 6th Birthday!

What fun! Happy Birthday Creative Kivi! It warms my heart seeing all those lovely people in that picture. Miss you guys! Don't miss the rain though :D

A belated Happy Birthday. God Bless you and the family.

What a party! Looks like the food turned out pretty good... and quite an assortment. What all was on the menu?