Kivi was so daring and brave. She was the first one to try everything. She almost gave up waterskiing because we had her trying water starts, but Peter got inventive and let them out slowly from the back of the boat. He got really good at it and I'm sure his arms must have been killing him at the end of each day, but he never complained. He was so happy that Eben and Kivi were actually skiing. The Hays family let us borrow their trainer board, which is one piece at the top, so it feels much more sturdy and the rope is attached to the board. The scary part for the kids was once they were done, they just had to let go and fall backwards into the water. They got over it soon enough though and were begging to go back out all the time. 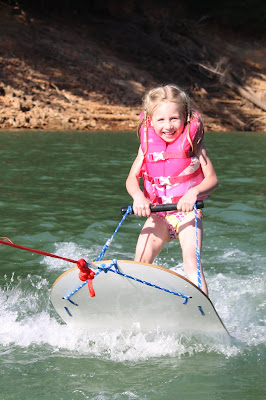 Once Eben mastered it, it was hard to get him to stop. He could hold on forever. 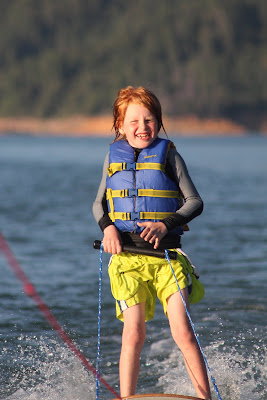 My mom and pop brought along their super cool kayaks, which was my favorite thing to do. The kids and I found this cool cove which we named Mud Salon. We made sculptures out of the mud like I did when I was little at Shasta and plastered it all over our bodies. The next day we kayaked everyone over to it and the kids showed off their art and applied the muddy goop to them too. 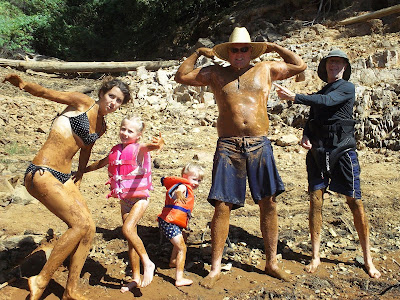 I like the contrast between the dark red-brown clay and my white belly. 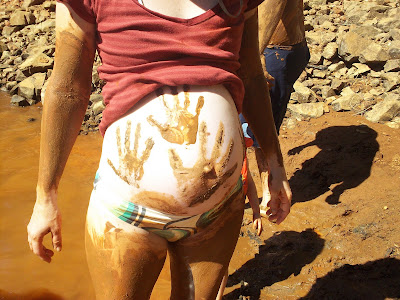 Eben jumping off the top of the houseboat while Opal and I look on. We had to get in the water everyday. It was super hot. And it would've been fine, except there were many fish and I have many moles. The fish tried to eat my moles every time I got into the water. Every day I'd put a piece of tape on a new mole, so by the end of the trip I had tape all over me. 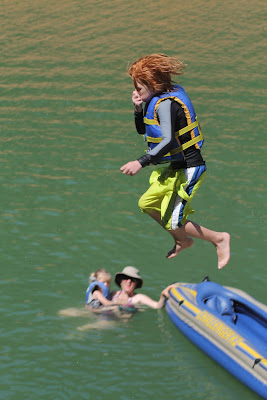 Jasper and Opal liked riding in the boat and tubing. Opal even took her naps on the floor of the ski boat (while it was going). I love that my cautious little man is using the slow down sign in this picture. They couldn't have been going more than 5 miles an hour. 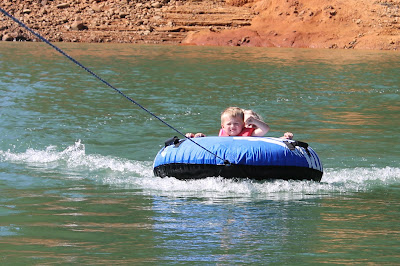 On the steep hill sides all around our cove Poppie, Nonnie and Buggy had made huge letters of the kids' first names for them to find. The slopes were also a good place to practice their sling shot skills, make a miniature golf course, and get cut when you fell. 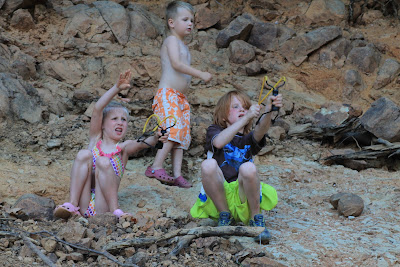 Berg did amazingly well on this trip although he was confined to inside the houseboat, he also had the run of the place. One of the rules the kids had to follow was "Close the screen door, so Berg doesn't die." And he didn't, so that was good. His daily activities included driving the houseboat to nowhere, since we never moved it from our perfect cove, sleeping in the closet, swimming, playing with his toys and yelling at meal times. 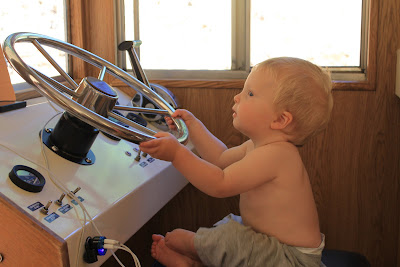 Jasper spent most of his time on top of the houseboat playing what else…Legos! 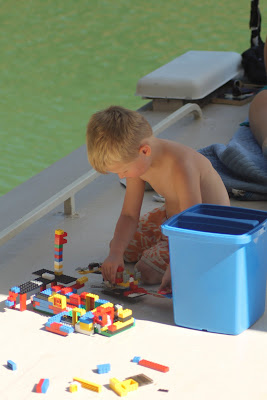 Dada was determined to figure out the air chair. He wake boarded some, but mostly he and my Dad fell over and over until something finally clicked and they stayed up! Peter was so happy to have mastered it. Look at how cute he is! 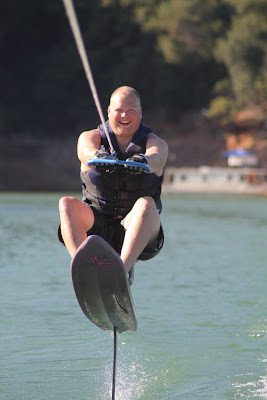 Our family of fish. I don't think I've ever spent so much time in the water. This was taken right after a "Try to Shove the Other Person off the Kayak Challenge", which I won. We had a great time with my parents and sisters and each other at Lake Shasta. Thanks Nonnie and Poppie! 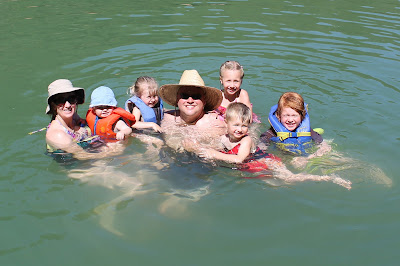 The summer that Jeremy and I got married (just 4 or 5 weeks before the wedding), we went on a houseboat trip with Jeremy's family. It was a lake his Mom and Uncle's had grown up on. To date, it was one of my all-time favorite vacations. House Boat trips rock! Glad you all had fun. :) The kids look so cute!