Jasper is a cool boy. For his fifth birthday he requested a "Monkeys with Fedoras" themed party. I don't know why. He doesn't especially love monkeys, but he got fixed on this idea long ago, so we went with it. He does have a fedora that we got him in CA that he loves, so he wore that and his banana shirt and carried his monkey, Steve, ( that I actually bought as a decoration for the party, but turned into his favorite animal) all over the place. 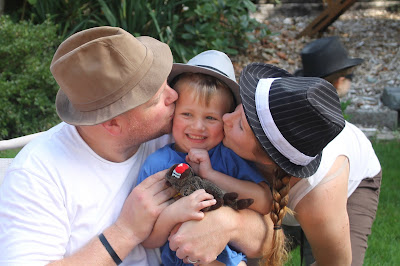 We started off with a banana eating contest, which I think was actually Eben and Kivi's idea. Bubba wanted to just watch. Kivi's banana fell immediately onto the grass and we almost had a serious melt down, but thanks to self control we survived. Eben kept eating his hair. Opal just stared at her's. Dada could've eaten the whole thing in 2 bites but I think he was going easy on the kids. Cousin Victor (you can see the back of his head) won! 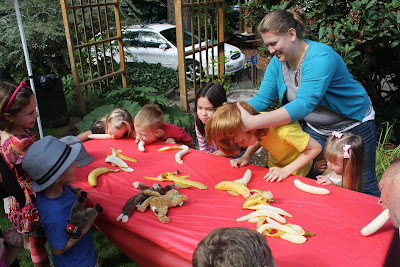 Next we played a toss the monkeys in the barrel contest. Which the kids loved because however many monkeys you got into the barrel that's how many pieces of candy you got. 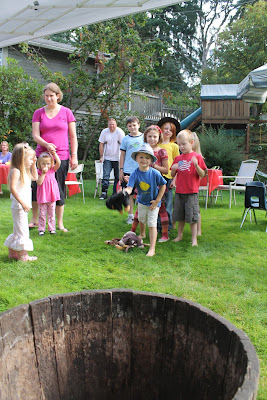 Cousin Madison tossing a monkey into the barrel while Uncle Chris tosses a Berg into the air. 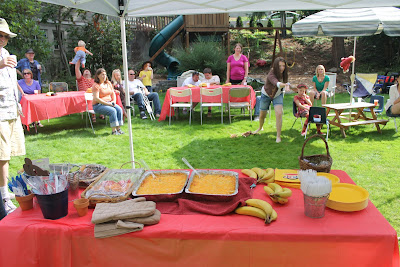 At Jasper's request we had peanut butter, marshmallow and banana sandwiches and Mac and Cheese. I made four huge casserole dishes of Tiffany Nevil's recipe and they were wiped out! And bananas were served of course. 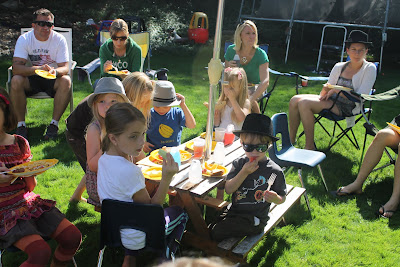 While Jasper opened his gifts the kids went back and forth from watching the presents to jumping on the trampoline - always a favorite. Dada's rule is let all the kids jump on it, and don't watch. As soon as an adult actually checks to see it the kids are safe, one of them will get hurt. 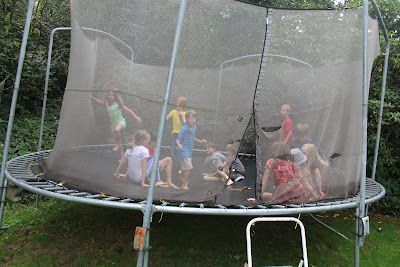 Cake time! It's suppose to be a monkey with a fedora on it's head. And yes, Dada is using crutches. He broke his foot wake boarding just two days before and thankfully Grandma and Grandpa and Uncle Chris and Uncle Tonya and cousins came early to help Mama set up, because he was out of commission. 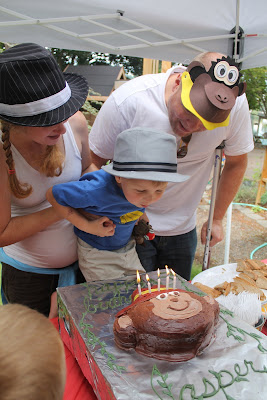 Does this boy even look like he could be five? He is way too cute. 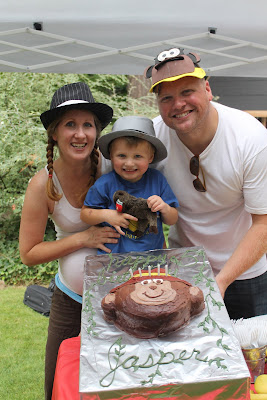 Along with cake we also had a self serve banana split bar! 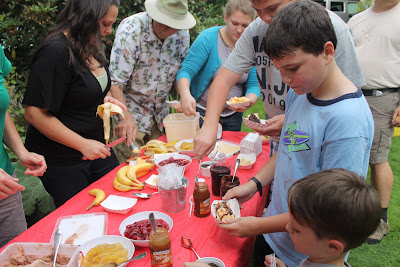 Here's a shot of all our friends and family who came to celebrate our man with us. 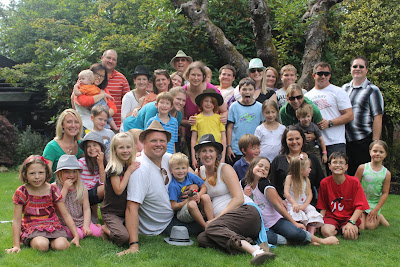 We love you so much, Jasper! You bring such joy to our lives. You are kind and loving and thoughtful of others. You make us laugh all the time. You are cuddly in your rough way. You get attached to crazy things and get super sad if anything bad happens. You love to share especially with your brother, Eben. Your favorite color is yellow. You want to wear shorts and sandals all the time. You wear size 3 clothes. You are reading like a pro and are almost done with your first Phonics book. You are a Lego maniac and can build anything. You are a child of God and He also thinks you're one amazing kid! Happy 5th birthday, Bubba!
Posted by The Johnsons at 3:18 AM

What a loved boy! Jasper is such a precious gift from God. Wish we could have been there.

Hey thanks for the shout out! Happy Birthday Jasper! What a fun idea for a party. We hope the Johnson clan is doing well as you transition into the gloomy months in WA! We love you guys!