Peter's wonderful parents' somewhat new Christmas gift to us is "memories" - we love them. Our memory for the past couple years has been a family trip after Christmas. This year it was before Christmas, Dec. 18 (right after the kid's Christmas pageant) - 20. It was great fun, but my head was still a little occupied with all the Christmas "stuff" I still had to get done before the 25th. We went to Leavenworth and stayed at the same place we did the year before at the Apple Blossom Inn, Pear Haven and Farmhouse - three cute homes owned by the same people who run Smallwood's Harvest, a little general store a couple of minutes before you get to Leavenworth proper. We spent most of our time between dance competitions on the Wii and puzzles. Marlee worked everyone. The nieces had cheated and knowing we would get them Just Dance 3 rented it so they could all beat Peter! Ha! 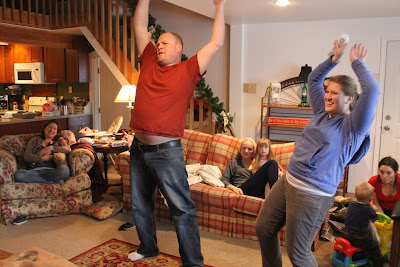 We finished a puzzle a day and almost everyone contributed. They are really addictive. The first day Peter teased me about how I was spending so much time at the puzzle table (while he was trying to beat Marlee at Wii) and then the next night he stayed up until 3 in the a.m. to finish one. The only incident was Jasper's eye colliding with his bed. If we were good parents we probably would've gotten him stitched up, but we're just o.k. parents, so he'll have a lovely, manly scar. 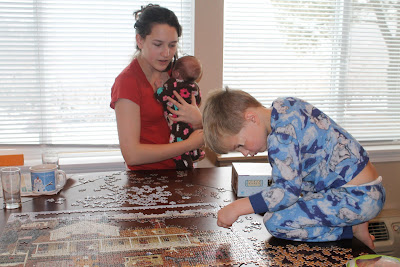 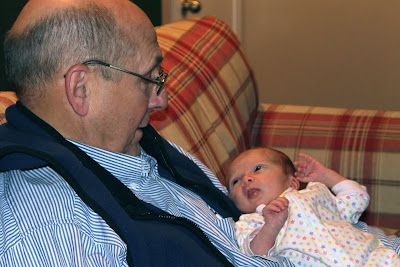 So much T.V.! I love every once in a while to go somewhere that has T.V. so that I can watch it and watch it and finally realize I've spent most of my time watching commercials or trying to find something good on and then be really thankful we don't have T.V. because really, I'm not missing much. Every morning the kids got to watch Curious George, and then Cat in the Hat, and then (yucky) Dinosaur Train. And then I don't even know what was after that because we sent them to the other room to watch the next kid show so we didn't have to any more. 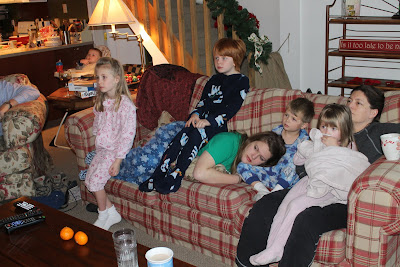 Dada found a great little sled hill right outside our place, in the orchard. Mostly Kivi and Eben sledded but some of us tried it out a couple of times. Eben gave Dada a little ride, and Dada gave me a great face. 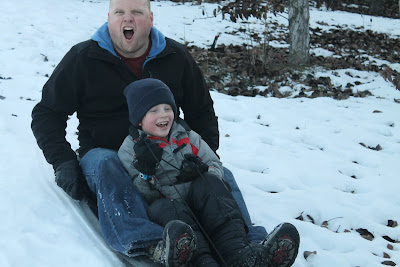 Eben and Kivi hauling their sleds back up the hill through the picturesque orchard. 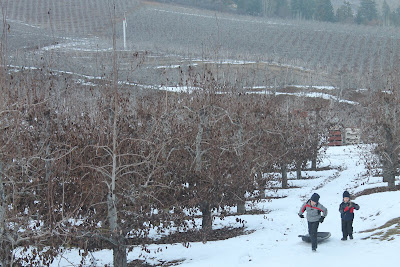 Beautiful pears that were still hanging on. They had to have been frozen solid. We should've picked them to see if they were still edible. 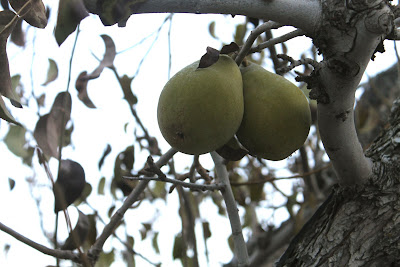 My beautiful Sweet Pea in the snow right after sledding down the hill. 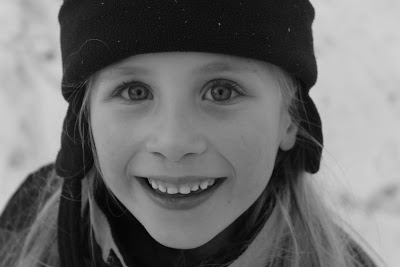 That place is super cute~ we havent been to Levenworth yet. I left you a reply comment on my blog, but I dont know if it lets you know that or if Its just a random thing and maybe youll see it maybe you wont type of thing? ;)

I've never been to Levenworth. Looks like you had fun just relaxing and doing nothing. Lucky for you that you had snow - especially since snow has been pretty scarce everywhere else this winter. We've had temperatures in the high 70's and 80's for the past 3 weeks. But that's crazy California for ya! I love you,
Momacita

What a cool gift!!!!!!!! I know it's off subject, but Jeremy was just fondly reminiscing about "Man Day" a few years ago and how great it was. All the people we were with drooled at the idea. You guys are fun people. I think you might need one of my "We Do Fun Here" napkins to frame.....