Holding the Flag for the Mariners Game

On April 6th, the Lakewood Police and their spouses held the flag for the opening ceremonies at the Mariners game. Peter and I were able to participate and had a blast!
We actually had to come and practice on the 4th, the day before Easter, so we took some photos.
This is behind the scenes in holding the flag all bundled up before we went onto the field. 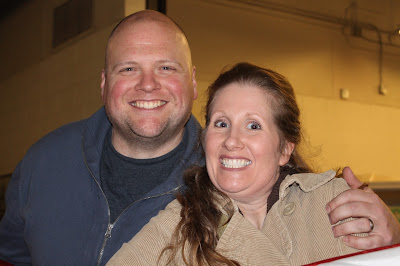 We practiced running backwards fast and then scrambling back, scooping the flag as we come back together. 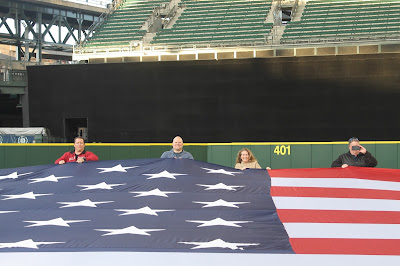 Right across from Peter and I was the then receptionist of the Birthing Inn, Susan, (she now runs the whole Inn and is a trained midwife) who helped Peter deliver Opal as our midwife was not there.  We both looked at each other and thought we knew her from somewhere and then she said. "Are you the couple with lots of kids who doesn't make it in time to have your babies at the Birthing Inn?" Ha! Yep, that's us! 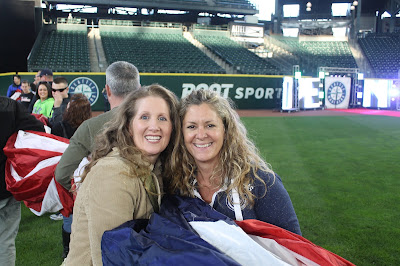 Peter snapped a shot, right before we went onto the field of us waiting in the sod pen. 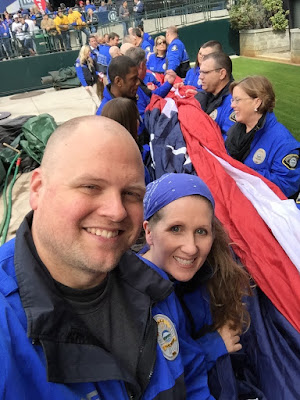 And a friend even found a news clip of the game, so the kids were able to see us carrying the flag too. They didn't get to go, they stayed with Grandma and Grandpa. Peter wasn't feeling too hot these days either but the bulk of his sickness hit on Easter so he was still able to carry the flag and we watched enough of the game from the very top bleacher for me to be able to dance and get on the Megatron. Sadly, I couldn't get any of the police officers to dance. Not even Peter. But he was sick, so he had an excuse.
Posted by The Johnsons at 11:35 PM