On August 27th, we decided to go camping! We had to try out the tent situation before the annual All Church Camping Trip in a real camp setting, not just the backyard. So we headed to Mt. Saint Helens. We found a great campsite for tenters only called Beaver something. And almost every campsite was on the lake. It was beautiful! Just us and nature. Opal crawled all over the dirt, the kids found bugs, moss and logs to play with. We all got filthy! Thank goodness for warm showers! About 10 minutes after getting there as we were setting up the tent the kids started screaming. We had given them one rule, "Don't go in the lake" But, one old child tossed another girl child's little log into the lake and a third small boy child freaked out that the "little boat" would be gone forever and tried to go in after it to retrieve it. Somehow, they ALL ended up with wet feet. Hmmm? So after a very strict talking to and extra long time outs for everyone, barefoot camping started while we tried to dry shoes by the fire. 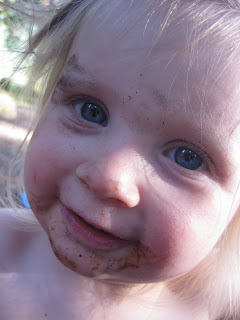 Opal LOVED the dirt! Her favorite game was picking up a handful and putting it on my leg. I'd brush it off and she'd do it again. A fun game for all. We also figured out on this trip, that Opal does not sleep well in a tent. We tried to have her nap in it and somehow she escaped and we found her about 5 feet from the tent. She never slept. At night time, she didn't want anything to do with laying down. She was so excited that she just crawled all over everyone. After about 20 attempts to put her back in her little spot, we realized we better clear out the back of the van because there was no way she was going to settle down in the tent. She went right to sleep. 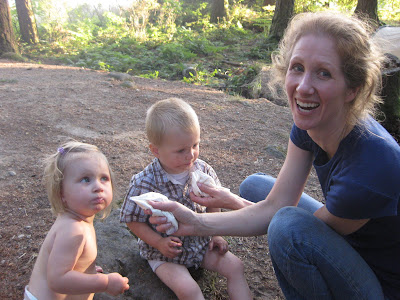 Dada had a brilliant idea to make homemade ice cream. Everyone took turns shaking the freezing cold bag of cream and sugar until it hardened. Then we gave everyone their own little baggie, cut a hole in the corner and dined on our delicious treat. Opal and Jasper thought it was too cold to hold, so I froze my hands off and squeezed it into their mouths for them, not to mention onto their shirts and on their legs. I couldn't feel my hands, it was hard to aim. Plus the ice creamy mixture melted way faster that it had hardened. It added to the messiness which was camping, but it was really fun. 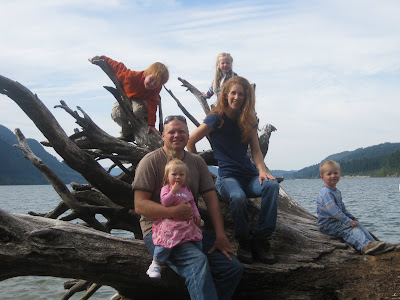 On our campsite, by the lake, on a large cool log. 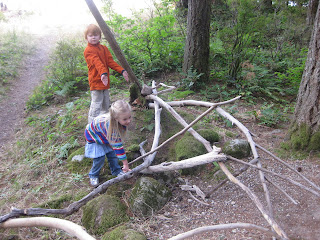 Eben and Kivi worked hard on this project for most of the night. They got all the logs from the beach and dragged them up near our tent. They called it "The Baby Trap" and it's purpose was to stop little babies from going down to the lake. 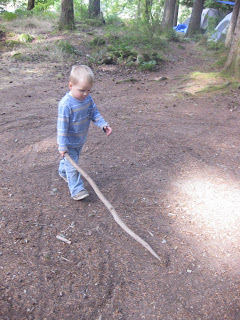 Jasper did this for about 2 hours. He's jet skiing. Can't you tell? 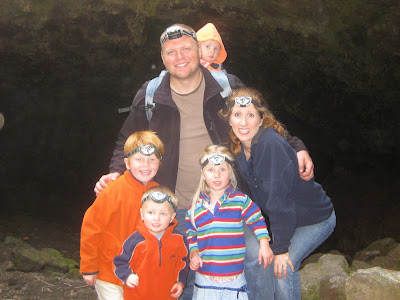 The next day we headed out to the Ape Caves! The kids had a great time each with their own head light. It was cold in there so although it was really warm outside, we were all glad we brought our sweatshirts. Jasper actually wore his headlight around his belly the whole time. I wish we had gotten a picture. It was so cute! We learned about stalactites and stalagmites, how lava forms caves and Mt. Saint Helens, at which we drove up to after the cave and had a hot dog lunch.

There was one other night time incident that happened that I don't want to forget, because while it was a pain and dreadful in the moment, it is hilarious now. Kivi has night terrors. The night we were camping, she had one. She doesn't fully wake up, but she screams her head off and we never know why, but sometimes, taking her to the bathroom helps. So at about 2 am, as everyone in the campsite is being woken by our screaming daughter, (remember only tents) we try to take off her one piece jammies and help her go potty outside the tent. Well, it's pitch black and I have to hold her, cause she's not awake enough to walk, and she kicks like a mad man. Yeah, not a good picture. I was scared to death someone was going to walk upon this scenario. What would they have thought? So, as soon as I get her outside the tent, I tell her to go pee pee. She does, but since I can't see anything, and she's kicking, and screaming, pee goes all over the tent. I try to shift her and I feel warm going all over my legs! Her screaming lasted 40 minutes! In a tent park! In the morning we asked her if she remembered anything about the night, or her dreams. She said, "No, but it was so much fun sleeping in a tent!" Ha! We had to apologize to the neighbors. Oh yes, they had heard her.

I love hearing about the crazy, wild, fun adventures and misadventures of the Johnson family! P.S. I met your husband at AWANA - nice guy!

Wow, there is a reason why I stick to hotels:) Fun times!

Those are the best stories for when they're teenagers! =}

Yeah, you guys are braver than us. We like the hotel/cabin scene, too. :)