Grandma and Grandpa's present to the Johnson clan was a trip to Leavenworth this year! We all drove in the bus together over the Snoqualmie pass right after Christmas day. We stayed in these cute little cottages called the Apple Blossom Inn, Pear Haven and The Farmhouse. They were newly remodeled and so cute! We found them on our trip to Leavenworth in the summer. They are actually owned by the cute country store, Smallwood's Harvest, that you can see from the main highway.

We had so much fun, mainly dancing to Wii's Just Dance (thank you Schocks!). It was a big hit. No one could beat Dada's high score - he's just too good. 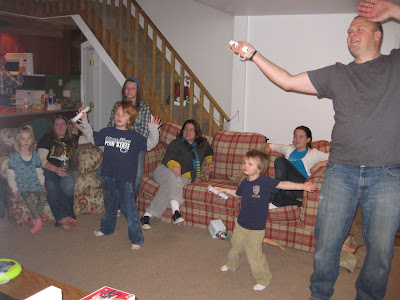 We went sledding on a massively steep hill going down into the orchards, right on the property. On Kivi's her first ride down, her boots filled up with snow and she froze. She was a good sport and tried again with Marlee, but they hit a big bump, rolled and Marlee landed on top of her. It was quite a sight, but Kivi didn't think it was very funny, so she was done. Eben had some good runs and one all by himself. He was mainly interested in throwing snowballs at whoever was trying to climb the wall of snow back up to the top of the hill. 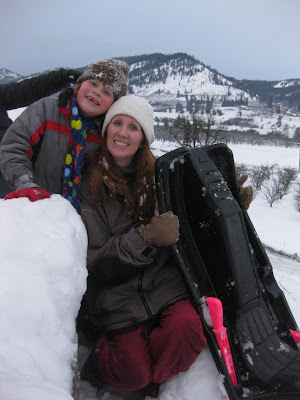 We went into Leavenworth to go sledding and walk around, but soon realized that our own awesome sledding hill was sooo much better than the ones in town. We didn't even take our sleds out of the bus. We headed staight for a candy store! The kids got lollipops, and after a very short stroll down the main drag we had seen enough and went back to our little bungalos. 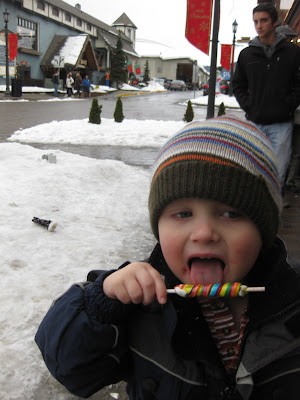 Peter and I, Marlee and the kids (minus Berg who stayed at the Apple Inn) went for a beautiful snow walk along the Wenachee River. The kids actually ended up pulling me longer than I pulled them. 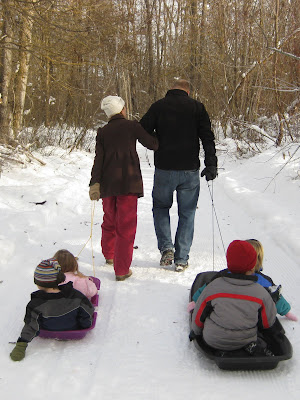 On our walk, we met up with our friends the Metcalfe's who were also vacationing. Kivi and Brayden held hands from their two sleds, so cute. We also went to the Lebows' house, our friends who were in our small group for years and recently moved out to Wenachee 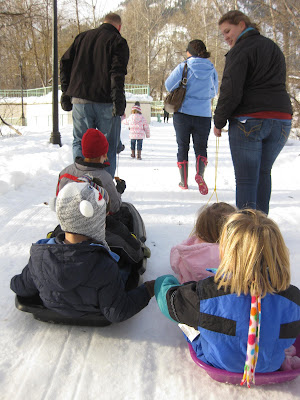 Chris joined us for little while between work, so we were able to get a family shot with everyone. 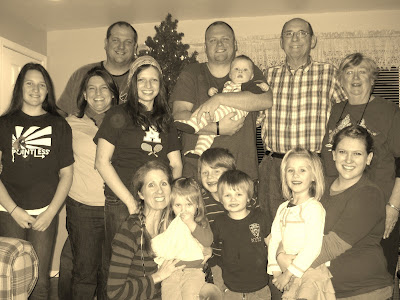 This was our view from the Apple Blossom Inn: 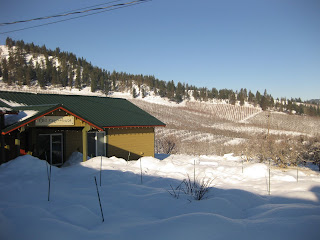 It was so beautiful with everything covered in snow and orchards as far as you could see. Here's something I got addicted to on this mini vacation - puzzles! We did a 1000 piece one and had so much fun, we stopped by a local thrift store and bought another, so we could do one the next day. We all finished it right before we left.

Here's some of our wii dance-a-thon. I love to watch Bubba in it - he's a riot! And he's not even playing.

After returning from Leavenworth is actually when we took the kid's picture by the tree (not of Christmas day.) There was too much going on; new stuff and a really messy house. When we got back from our mini vacation, we donned our jammies again, took pictures, and ate the very old and very hard gingerbread houses!!. We took pictures again with Dada for our family pic, which didn't make the Christmas blog. 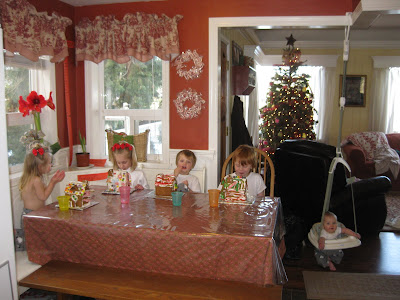 So here it is,
Johnson Family Christmas Picture 2010: 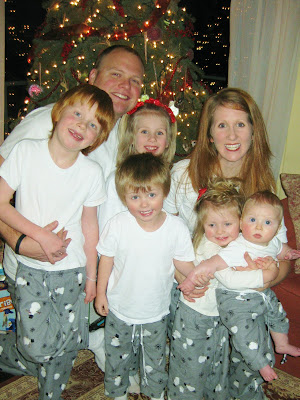 HA! It did take you long enough! I am surprised that Peter let you publish all that special information on your sweet cabins in Leavenworth! The snow is peaceful and beautiful. Hope you finally got some sleep.
Love ya,
Tiff

You're so cute. So glad that you guys have all fallen in love with Leavenworth, cuz then we'll get to see you once in a while. This summer, you'll have to come again, and we'll go to the Cashmere pool, or maybe to one of the Leavenworth play productions!