After our houseboat trip we all came back up to WA. Buggy only stayed for two days because she had to get back for school, but it was enough time to go trapezing!
Mamacita bought my sisters and I trapeze lessons at Emerald City Trapeze in Seattle! 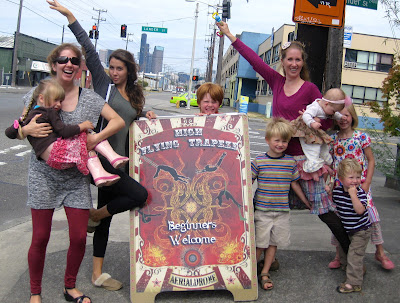 They had a great upstairs room with a swing, hammock, and tumbling mat for Peter, Mr. Steve, Poppie, Nonnie and the kids to watch and hang out. 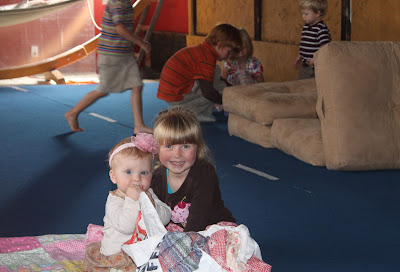 We were even kind of matching in our trapeze outfits! The Flying Sister Act, before we knew what in world we were getting into. 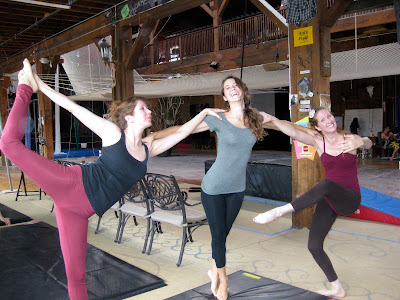 The first thing they had us do was this: 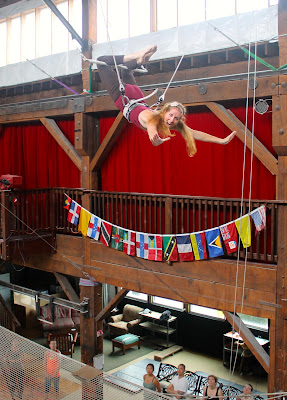 It looks super simple, but IT'S NOT! If you get to this point exactly when they tell you to do it, then they ring the cow bell for you which means your good enough to try to be caught by the strong man on the other trapeze swing. Buggy and Shmee got the cow bell on their first tries! 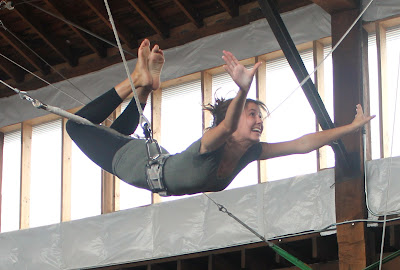 Shmee had actually done this before, so she got to do an even cooler trick where she hung by her ankles. This was her "flying off trapeze from the ankle" position. See how they're both super high and perfect? 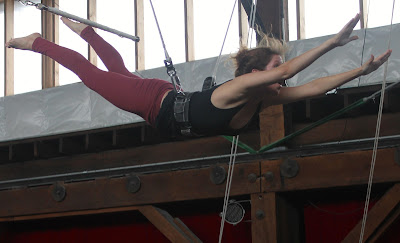 See how I'm falling thousands of feet to my doom? I was cow belled and passed, and then I fell off and the next time couldn't get in position in time and I got UN-COW BELLED! They've never done that to a person before. I was determined to get re-cow belled. So even though all the muscles in my legs felt like fire and there were a million bruises in my knee pits (is there a word for that area?) I tried and tried to get to that "hang by the knees, arms stretched out" position in time and I was re-cow belled! Whooo! 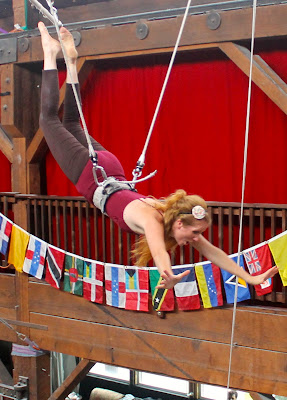 Shmee was caught first and did amazing! See how her arms and his arms are connected at the elbows? 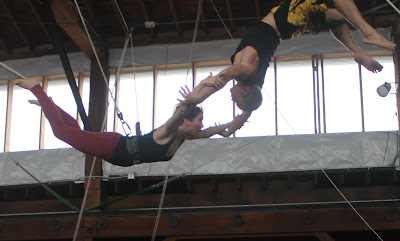 Buggy went next and she did just as great and got caught at the forearms! This is the bar where you jump off. 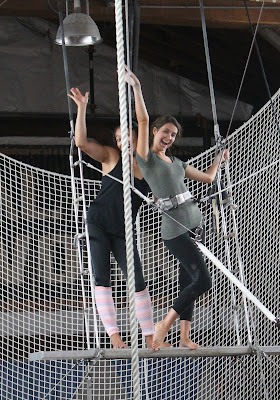 Then I went and I missed the catch. I was very sad. On my second try, I reached as far as I could and thought there was no way I'd make it because he seemed so far away. Then all of a sudden he grabbed my fingertips and yanked me out of the air! I was so excited, and my fingers hurt so bad! 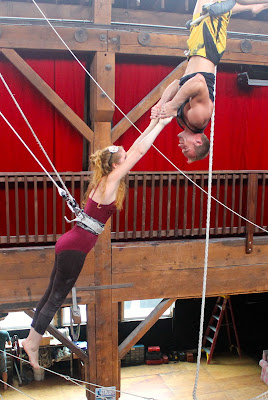 The pain was all worth it though because now I'm a flying trapezeist.

I know! So hard, but so much fun! I'm really glad that you enjoyed the experience, even if it was humbling!
Love,
Momacita

I want to try this! We are so going to do this for a girls day out when I get back to town!!!! Yes our apartment in Hungary is furnished, its a temporary living space till we find a home. Which will be soon hopefully! :) Its pretty big but only 2 bedrooms and not a lot of storage space. But that's fairly typical for Hungarian homes.