Peter and I had this crazy idea while we were going to Rainier View to put on a simple, little kid's Christmas pageant; have the kids read Luke Chapter 2 and as the story is told have the kids who are dressed up as whatever character they would like to be go on stage as that part of the story is read. In between readings everyone would sing corresponding Christmas carols.
I was telling Miss Niki, our amazing children's director at Lake City, about our little plan we had come up with years before. This had a lot to do with our coming to Lake City, as we weren't able to do it at Rainier View. While trying to see my mentor mom's husband preach at Lake City someone told us that our kids would be in the Christmas pageant and we should come every Sunday so they could practice. We've been at LC3 ever since. Of course, there's more to the story than that, but that's the simple version.
Since Lake City was not putting on a Christmas pageant this year, Miss Niki said, "Let's do it!". I thought she was talking about next year, because this December was already here but she meant now. So we figured out a day, Dec. 20th, and the cute, little pageant was on.

On Wednesday, before Awana, we got Holt Chapel ready: set up chairs and tables, made the backdrop, and put up decorations. On Thursday evening, the kids all came and got into costumes that Miss Niki and I had gathered from all around the church. 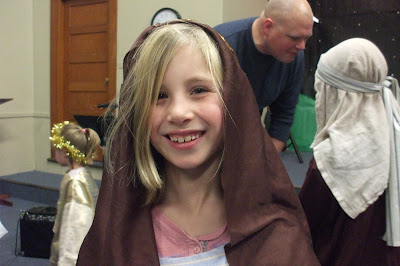 I handed out reading parts to any kids who wanted to read. We picked "Mary" out of a hat, which ended up being Opal. She was so happy! She changed out of her sheep costume and into her precious Mary attire so fast. Then I prepped the kids for about 3 minutes explaining what we were going to do and when to go onto the stage and then we started. 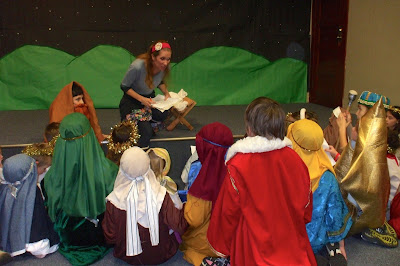 Peter played the guitar and sang with our friend, ChristineEss, the kids took turns reading into the microphone, knelt, stood and sometimes sat on the stage in their costumes and we all sang together the wonderful songs of praise to our King! During the last song, we all lit candles and sang a cappella.  It was beautiful. It ended up being the a very sweet, simple retelling of the story of Christ's birth.

Eben chose to be the star of Bethlehem, Kivi was a shepherd, Jasper was an angel and Opal got to be Mary. Berg felt sheepish and Pella chickened out and chose to not go onto the stage, which was probably for the best, but I had them prepared just in case. They did enjoy the refreshment time at the end. Everyone brought cookies and we had hot cocoa. 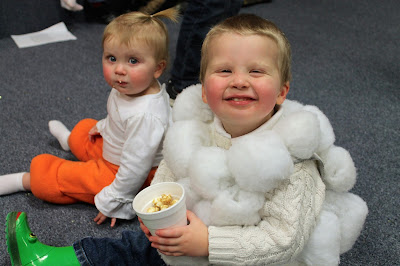 It all went by so fast I wish I had gotten a picture of everyone, or at least of our family, but we did get one with Aunt Sherri as she had come down to see our little nativity for the evening. 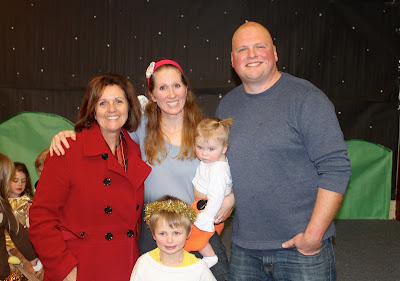 We were so glad we video taped this. It brought us such joy to watch again and I know it will in years to come as our kids grow out of the pageant age and we can look back and see all our friends and "remember when".
Posted by The Johnsons at 11:04 AM