Narnians At The Harvest Carnival

We love family themed costumes! This year we all decided to dress up as characters from The Lion, The Witch and The Wardrobe.

We cut her hair for the event that night! She had been wanting it short and this was a good time to do it since it went with her character so well.
We had actually planned on Berg being Mr. Beaver, but he insisted that he be Mr. Tumnus. His idea was way better! Plus it was the second year that he had no shirt on for his costume.

They don't kiss in the movie just to be clear. Aslan is like the Jesus character and the White Witch is more like satan, so this is could be a very sacrilegious picture, but we're just kissing as Mama and Dada. I love how his lips come out of the lion's mouth. I made the cool icicle crown by twisting strips of plastic containers over a flame. It took a very long time and I messed up a lot,but I love how it turned out! 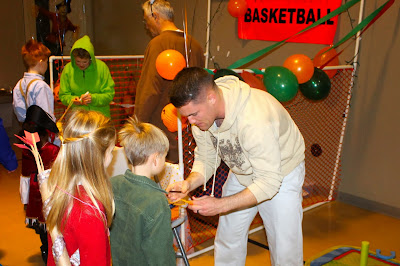 After our family photo we went straight to playing the carnival games this year. 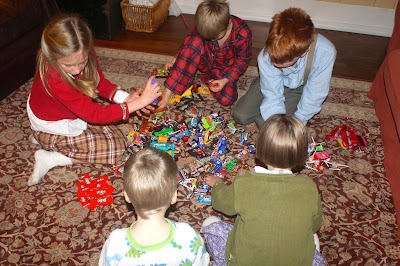 Then we came home, had some Taco Bell tacos and divvied out the candy before bedtime.
Since we want the kids to be able to have a fun night of playing and dressing up that night, we served with them this year by setting up and taking down all the decorations for the event.
Posted by The Johnsons at 11:09 AM