Pella turned three on the 23rd of November and her party was all scheduled and invitations were sent to have her party on Saturday the 22nd. Little did we know she would be having a baby brother on the 21st. (Tuff was due on the 27th so we thought we had all this time.) We decided to change the party to Wednesday the 26th since there was no Awana the night before Thanksgiving. 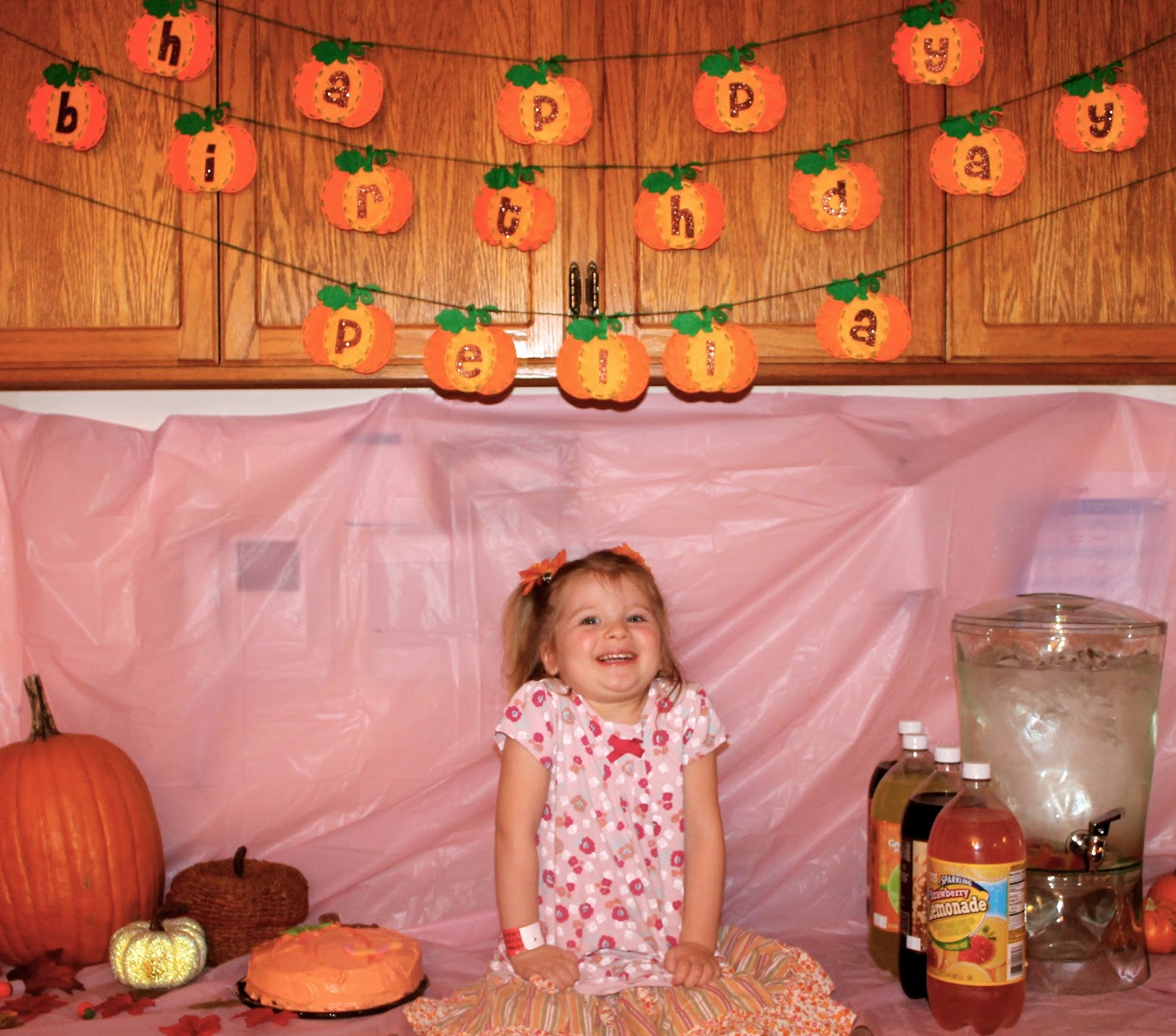 Pella had been talking about having a "Wormie" birthday party for most of the year before she turned three but her party started morphing into many more ideas the closer we got to the actual event. The worm part is because she found out that she was our Baby Wormie in my belly and then leaves were added to the mix. Later on she kept saying we needed to have pumpkins at her party too, probably because they're all over the place in fall - I don't really know the thought process. She kept adding more and more themes. At some point it was going to be a worm, leaf, pumpkin, angel, hedgehog party, but I convinced her that the first three were good enough and we could save the angel hedgehog party for when she turned four. I do love letting them come up with their own birthday themes, but working three things instead of five into a cohesive party theme the week after having a baby, the day before Thanksgiving seemed more up my alley. And she was happy. 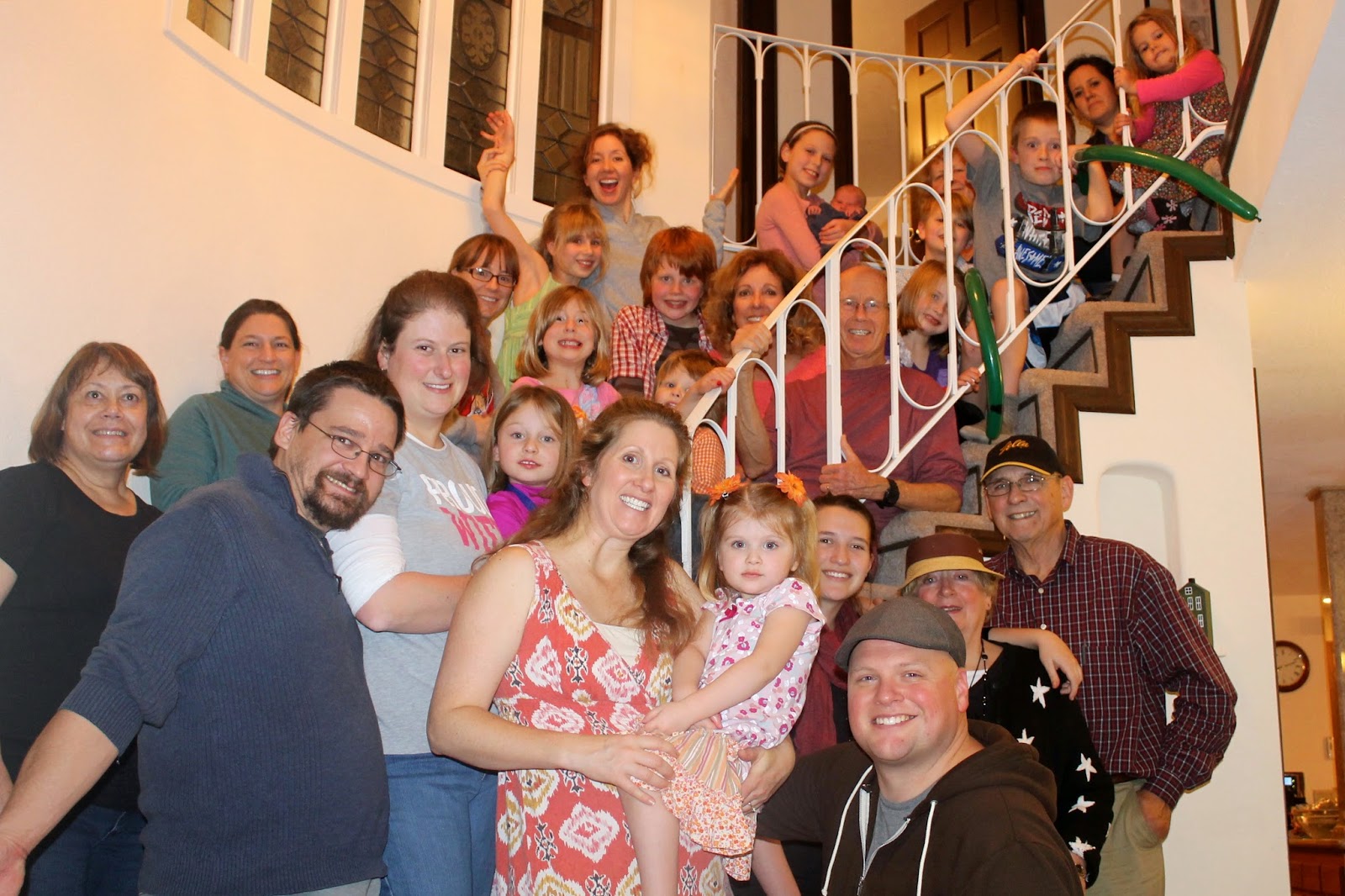 We did come up with some fun worm and pumpkin games. They made their own worms out of balloons which they found hidden all around the Schock's house. The Schocks let us use their home which was actually Pella's original idea, but I tried to steer her away from that plan thinking it would be too much for Shari so close to Thanksgiving. But Shari was a gracious host let us have it there when we realized our little house would be very cramped.
We played a fun relay where we passed a live worm from person to person on a real leaf. The kids passed with their hands, but the adults had to pass with the leaf in their mouths! It was great fun to watch. The kids played a "see how many real worms you can find with a blindfold on" game. As soon as they picked a fake worm their turn was over. Pella and Emma made up a wiggle like a worm game.
Pella's #1 request, a pumpkin piñata which also had a leaf and worm on it, lasted forever! I actually made two of them thinking they'd bust it right open and we'd need another one so all the kids could have a turn. But the paper mache took so long to bust open Peter finally ripped it open with his hands and shook the candy out. 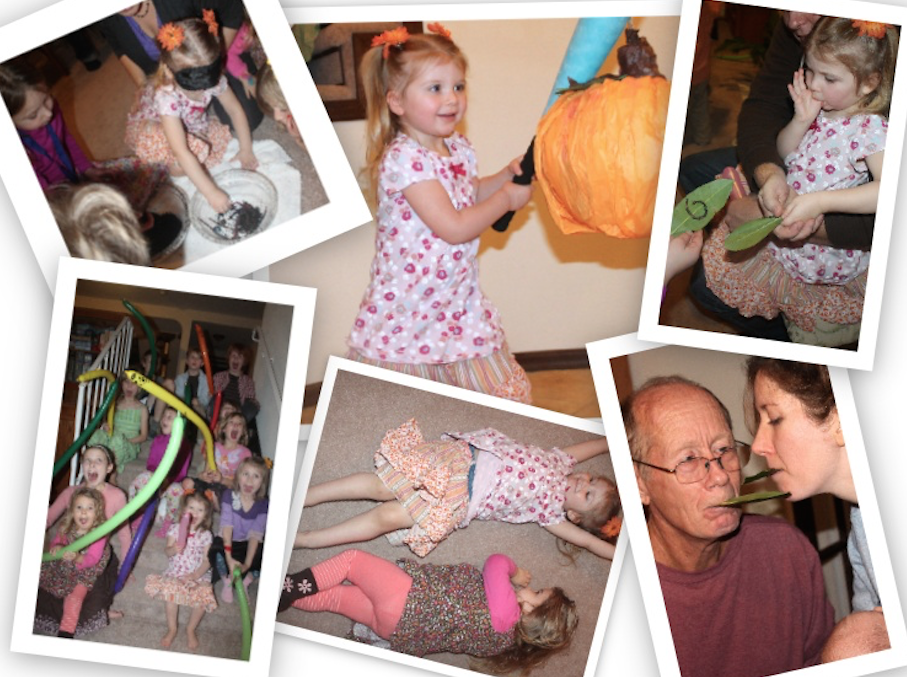 We ate some delicious mazithra pasta (it also looks worm-like!), broccoli, salad (totally a leaf) and bread for dinner and both pumpkin and dirt with worm cakes for dessert. 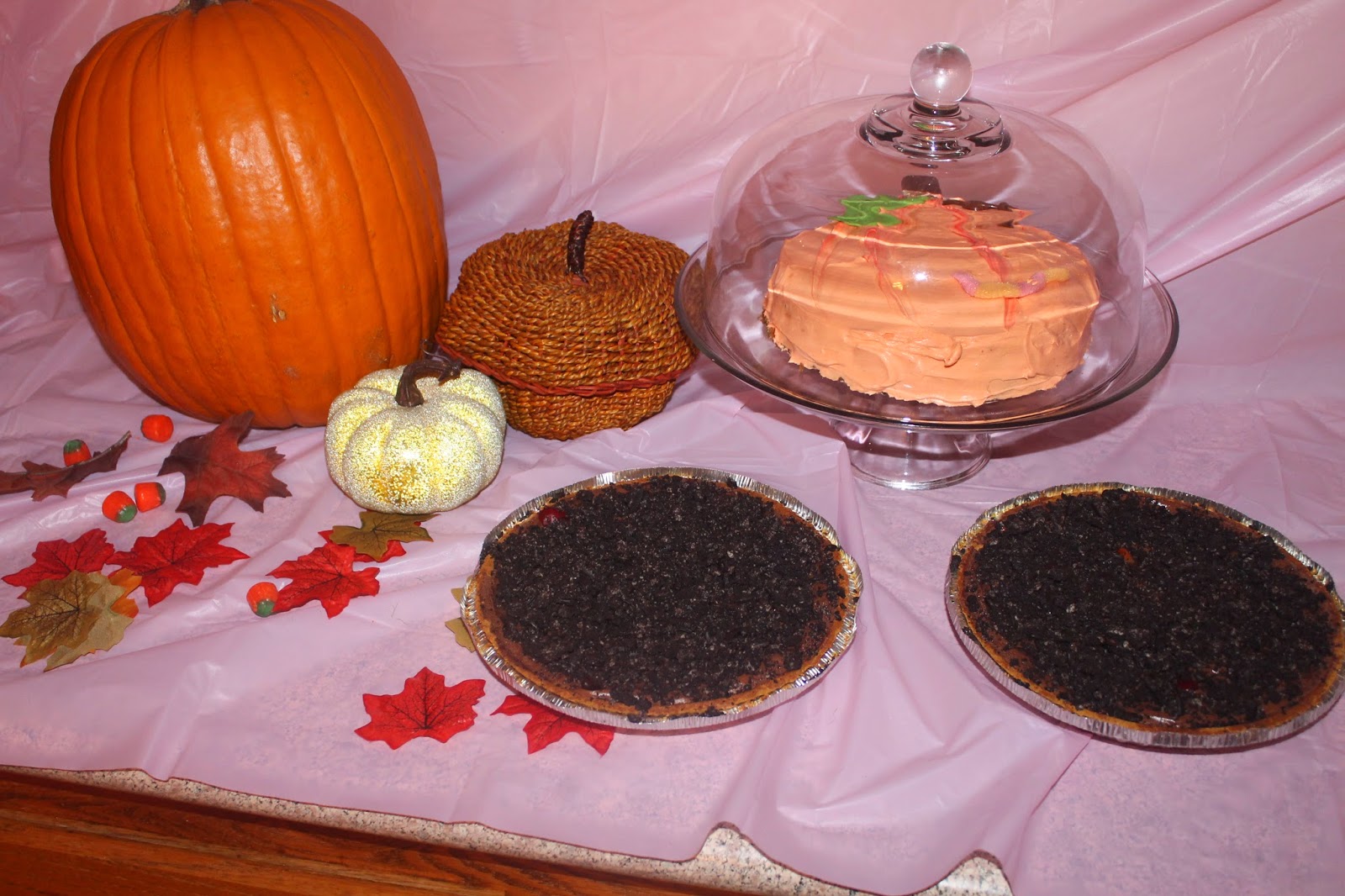 We sang, Pella blew out her three candles and she opened her gifts, one of which was a a Build-a-Bear fairy outfit that looks really good on 5 day old, Tuff. 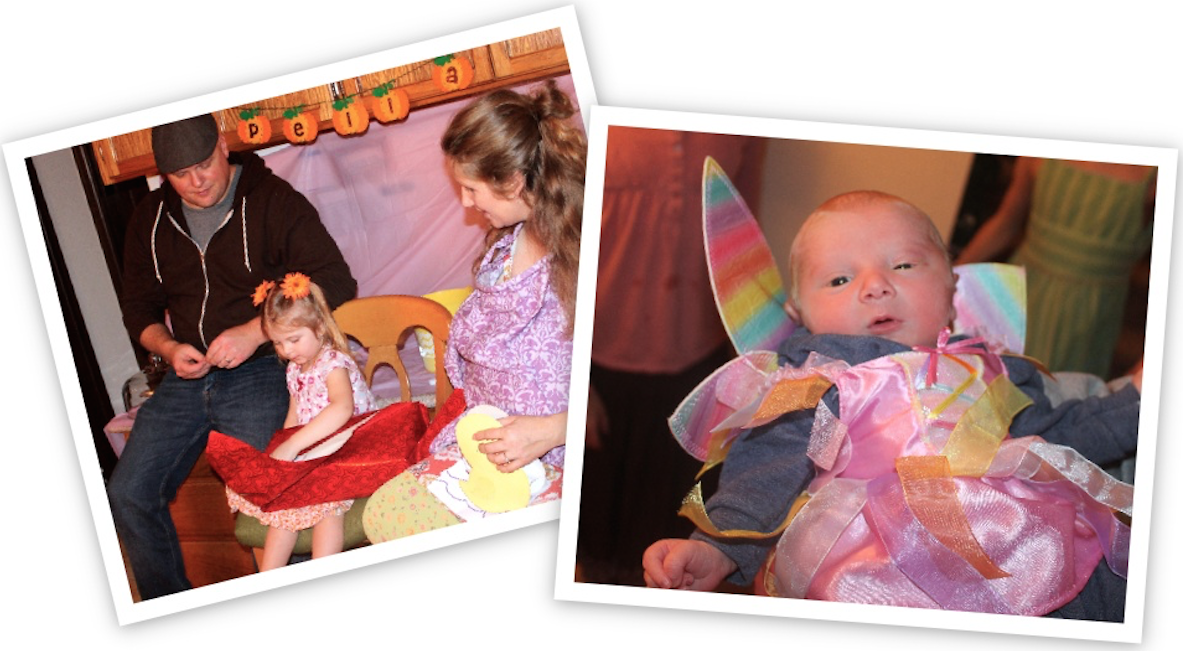 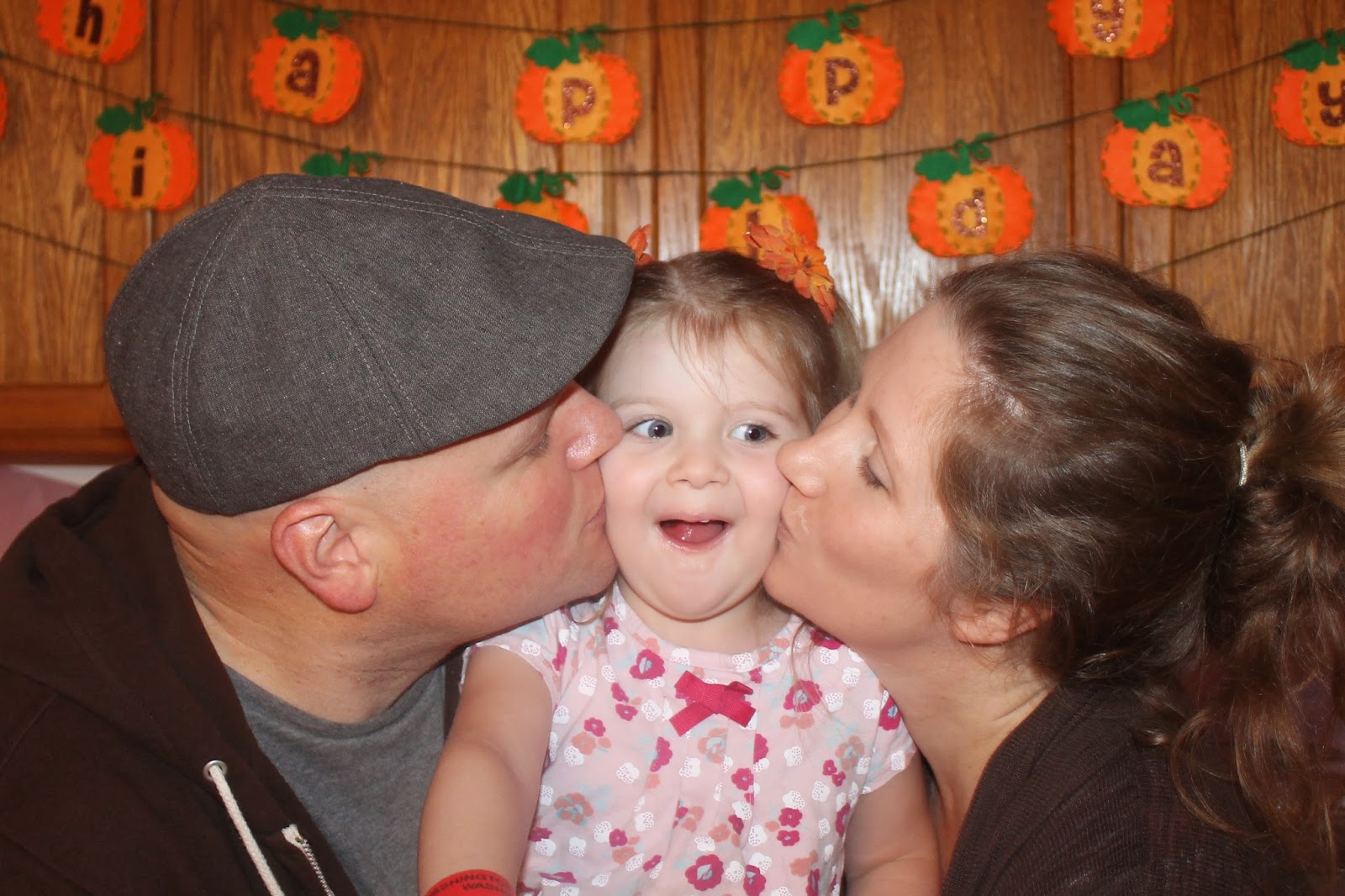 Oh Pella, you are such a fun, fun girl! Your personality shines and you make us crack up everyday with your sweet smiles and big eyes. They way you glance up to the side while explaining something or telling a story is the cutest ever. You are super great at helping your brothers and sisters and figuring out how to do more and more on your own. You wash and dry the laundry with Berg and sort and put away everyone's clothes. You are learning more of your letters and numbers and finished your first letter book written by you. You love Jesus and sing us "Away in a Manger" whenever we need a show. I know you will use your amazing personality and gifts to reach people for Christ! We love you, Pelly Lou! Happy 3rd Birthday!